Add an Event
Newswire
Calendar
Features
Home
Donate
From the Open-Publishing Calendar
From the Open-Publishing Newswire
Indybay Feature
Related Categories: Santa Cruz Indymedia | Animal Liberation | Environment & Forest Defense
Entangled Humpback Whale Freed in Monterey Bay
by Santa Cruz News
Wednesday May 20th, 2020 1:06 PM
A humpback whale found entangled in dungeness crab fishing gear in the Monterey Bay was freed by a team of rescuers on Monday, according to the National Oceanic and Atmospheric Administration (NOAA). The whale was entangled in multiple sets of fishing gear that were so heavy, they "anchored the whale in place," according to Justin Viezbicke, California Marine Mammal Stranding Response Coordinator for NOAA Fisheries’ West Coast Region. 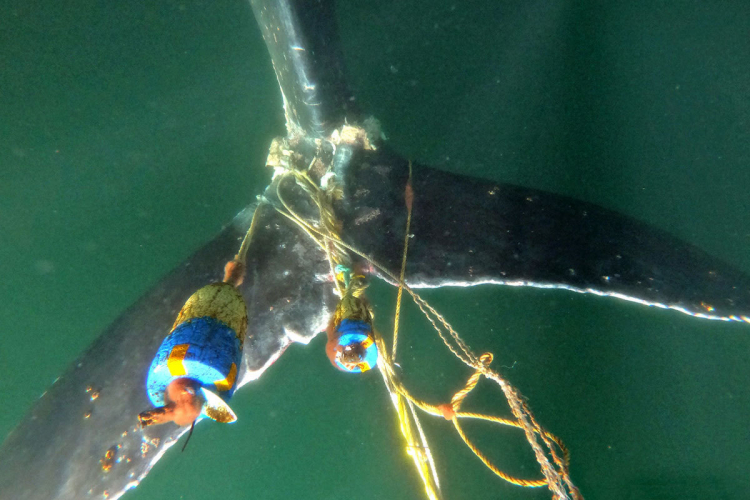 A trained response team on Monday freed a humpback whale in Monterey Bay. It had become so severely entangled and weighed down by commercial dungeness crab fishing gear that it could not move.

“It was anchored in place,” said Justin Viezbicke, California Marine Mammal Stranding Response Coordinator for NOAA Fisheries’ West Coast Region. “We were fortunate to have an experienced team that could respond so quickly. They deserve a lot of credit for sticking with it for three days and safely freeing the whale.”

The successful response was the result of hardworking teams from Marine Life Studies (WET)®, Moss Landing Marine Laboratories, The Marine Mammal Center, National Marine Sanctuaries West Coast Region, and U.S. Coast Guard. This was the third time an entangled whale off the West Coast has been freed in about a month. Responders also freed a humpback whale off Santa Cruz Island in mid-April, and a gray whale near Port Angeles, Washington in late April.

A California Department of Fish and Wildlife vessel first reported the entangled humpback whale about 11:15 a.m. on Saturday, May 16. A team responded Saturday afternoon, documenting the entanglement. Responders reported that the line was wrapped repeatedly around the whale’s tail, cutting into its flesh. The team tried to attach a telemetry tracking buoy to the 35-40 foot whale. They lost the opportunity when the entangling lines shifted, pulling the buoys underwater.

A team returned to the whale on Sunday. They successfully attached a telemetry tracking buoy to the entangling gear. They were also able to further assess the entanglement to support a response plan. Unfortunately, weather conditions deteriorated and the team then had to leave the whale.

On Monday morning, with the addition of the U.S. Coast Guard and other network volunteers, the team returned to the whale. By about 1 p.m., they had cut the whale free of the fishing gear. They found that the entanglement involved three sets of commercial dungeness crab gear. It is believed the whale first became entangled and began dragging a crab pot that caught two additional pots and associated lines and buoys. The weight of three combined sets of gear stopped the whale from swimming.

The removal of the gear greatly improves the chances of survival for the whale. However, its outlook remains uncertain.

NOAA Fisheries would like to thank all those who participated in and supported the response to free the whale over the last three days.

Humpback whales have rebounded in number off the West Coast in recent decades.

Entanglements along the West Coast have also increased in the last decade. This may reflect various factors including increasing whale populations and greater overlap of whales and fishing areas. Working groups of fishermen; researchers; and state, tribal, and federal fisheries managers are trying to minimize the risk of entanglements off California, Oregon, and Washington.

Entangled whales can be dangerous and should be approached only by trained response teams authorized by NOAA Fisheries. Entanglement Response Network partners receive training from NOAA Fisheries and invest much of their own time in training for and responding to entanglements. We are grateful for all of our entanglement response partners along the West Coast.

Prompt reporting is the best way to help an entangled whale. 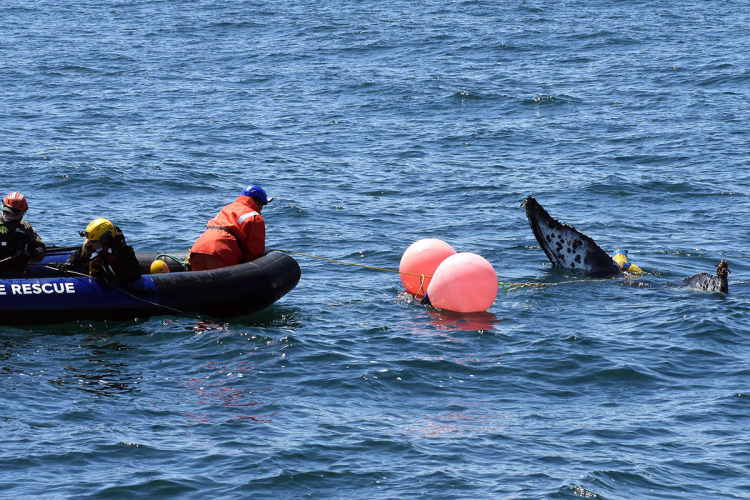