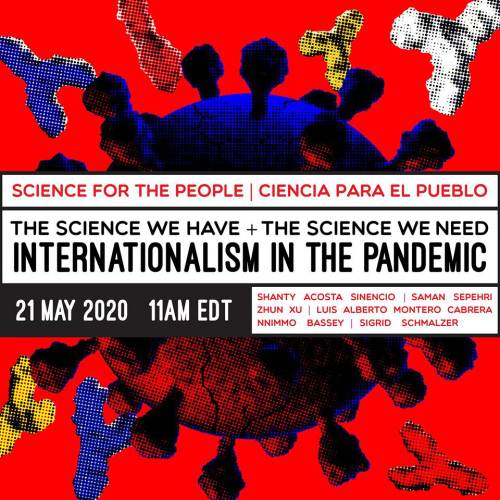 Import event into your personal calendar
Date:
Thursday, May 21, 2020
Time:
8:00 AM - 9:00 AM
Event Type:
Panel Discussion
Organizer/Author:
Science for the People & partner
Location Details:
Online via livestream
WEBINAR: The Science We Need + The Science We Have: Internationalism in the Pandemic

WHERE: Livestream links below

Science for the People and Ciencia para el Pueblo are co-hosting a webinar on internationalism in the pandemic. The webinar will be covering the following three issues:

(1) The Science We Have: an analysis of the dominant structures, institutions, and paradigms that contribute to austerity and the misuse of science for oppressive ends, and how the resulting power dynamics limit a humane and transformative response to the ongoing crisis in the context of Covid19.

(2) The Science We Need: rooted in the specificities of regional contexts, possible avenues towards the transformation of “science as a whole” in the interests of justice and human need. How might have a transformed terrain of science rooted in justice have responded to a pandemic like Covid19?

*Nnimmo Bassey* is director of the Nigeria-based ecological think-tank, Health of Mother Earth Foundation (HOMEF) and member steering committee of Oilwatch International. He was a co-recipient of the 2010 Right Livelihood Award also known as the “Alternative Nobel Prize.” His books include "To Cook a Continent – Destructive Extraction and the Climate Crisis in Africa" and "Oil Politics – Echoes of Ecological War".

*Dr. Luis Alberto Montero Cabrera* is a professor in the Department of Chemistry, chairing the branch of Natural Sciences at the Academy of Sciences of Cuba. He also chairs the Scientific Council of the University of Havana.

*Shanty Acosta Sinencio* is an independent biologist and chemist from the Faculty of Science at UNAM, Mexico, and a member of Ciencia para el Pueblo- Mexico.

*Zhun Xu* is an assistant professor in the Department of Economics at Howard University, having previously taught at Renmin University in Beijing. He is the author of "From Commune to Capitalism: How China's Peasants Lost Collective Farming and Gained Urban Poverty".

*Sigrid Schmalzer* is a professor of History at University of Massachusetts Amherst, with a Ph.D. in Modern Chinese History and Science Studies from UC San Diego. She is a co-founder of the revitalized Science for the People and the co-editor of "Science for the People: Documents from America's Movement of Radical Scientists".

*Saman Sepehri* is an analytical chemist at Northwestern University and a long-time activist of Iranian descent. He has written on Middle East politics, the internal dynamic of Iran, and questions of world energy and the geopolitics of oil. He is currently a member of Chicago DSA.

*Laura Peñaranda* is a Colombian labor organizer with Trade Unions for Energy Democracy (TUED), a member of the International Committee of DSA and Science for the People; she studies Urban and Labor studies at CUNY in New York.

END_OF_DOCUMENT_TOKEN_TO_BE_REPLACED
Added to the calendar on Tue, May 19, 2020 8:10PM
§DIRECT LINK TO LIVESTREAM
by Science for the People
The Science We Need + The Science We Have: Internationalism in the Pandemic

https://www.youtube.com/watch?v=1aLYwkJvM0g&pbjreload=10
Add Your Comments
Support Independent Media
We are 100% volunteer and depend on your participation to sustain our efforts!