Add an Event
Newswire
Calendar
Features
Home
Donate
From the Open-Publishing Calendar
From the Open-Publishing Newswire
Indybay Feature
Related Categories: San Francisco | U.S. | Arts + Action | Health, Housing & Public Services | Police State & Prisons
As the Death Toll Rises, We Demand: Trump/Pence Out Now!
by Refuse Fascism Bay Area
Tuesday May 19th, 2020 11:44 AM
Refuse Fascism in the SF Bay Area is carrying out a series of actions in response to the dangerous situation we are in. We will deliver body bags to the Federal Building in San Francisco (on Seventh St.) on May 27 protest escalating deaths in prisons and detention camps, and we will do freeway bannering on May 20, with banners saying “Trump=Fascism=Death” and “Trump Pence Out Now” along with other actions. These will be protests that support and preserve social distancing. 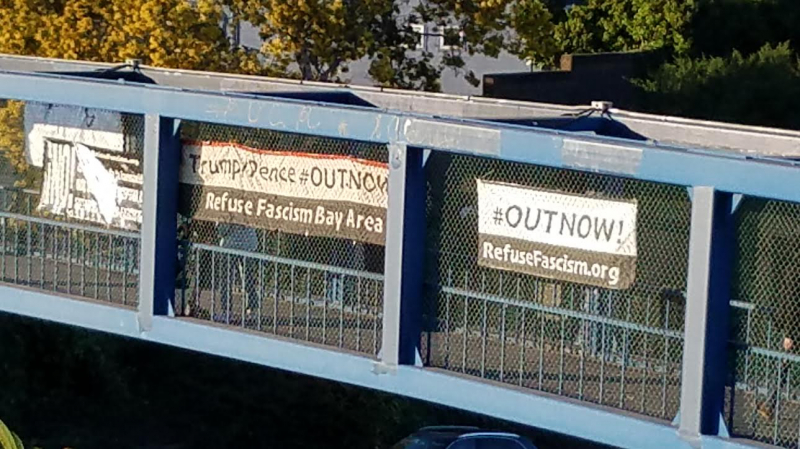 original image (1289x725)
Donald Trump is not “self-destructing.” Nor does the fascist movement which he leads, and which currently dominates the executive and judicial branches of government, intend to give up, fumble away or gently concede the reins of power.

In fact, they intend to go further, and are seizing on the crisis around the coronavirus as a means to take the offensive and further consolidate their grip. The RefuseFascism.org Statement of Conscience says it well: “The world as we have known it is being torn asunder.”

What this regime is doing in the prisons, in the detention camps for refugees, to the homeless, is a concentration of what this American fascism is all about. People are trapped, social distancing is not possible, very few have been released. This is not a mistake, it is systematic:

8 of the 10 largest coronavirus outbreaks in the US are in prisons and jails.

At least 25,000 people in US prisons have the virus, and 373 men and women in the US have died after contracting the virus behind bars, a figure that is climbing and which the ACLU says is “dramatically under-reported”

Half of all those tested in immigration detention camps have the disease.

Jails in major cities are the worst, places like Cook County Jail in Chicago and Rikers Island in NYC have seen huge outbreaks - and in the city jails people go in and out, and the disease is carried into the surrounding community.

This is a death sentence for people who in many cases have not been accused of a crime, who in the case of refugees are exercising their rights under international law. This horror is not an aberration or a departure from what the Trump/Pence regime has always been about. This is the consequence, in the current conditions of the epidemic, of the white supremacist politics spewed out from Trump all along - calling immigrants rapists and murderers right from the start of his campaign, talking about “shithole countries”. And this should send a jolt of recognition to people who have sat on the sidelines as the regime step by step stripped away the rule of law, packed the courts with fascist judges, assaulted science and boasted about how the victors define reality and determine right and wrong, who have watched armed bands with confederate flags threaten government bodies.

This IS fascism. This is the time to get OFF the sidelines. This is why we are carrying out this series of actions in San Francisco. This is why we cannot wait, why we must take to the streets, and as the Statement of Conscience of Refuse Fascism states:

There is a way to stop this. We will follow our conscience, sound the alarm, and organize so that it becomes possible for thousands to take to the streets across the country in non-violent sustained mass protest demanding Trump and Pence Out Now, growing to millions, and staying in the streets until our demand is met. This is not the easy road, it requires sacrifice, yet our actions will reflect our love for humanity, in stark contrast to the hate and bigotry of the Trump/Pence fascist regime, and create a serious political crisis for the ruling powers, leading to a situation where this illegitimate regime is removed from power.

This is urgent, and we must prepare to do this even in our current situation. Join with Refuse Fascism, and take up this crucial mission.

@sfrefusefascism
http://www.facebook.com/RefuseFascismBayArea/
https://refusefascism.org/
Add Your Comments
LATEST COMMENTS ABOUT THIS ARTICLE
Listed below are the latest comments about this post.
These comments are submitted anonymously by website visitors.