Add an Event
Newswire
Calendar
Features
Home
Donate
From the Open-Publishing Calendar
From the Open-Publishing Newswire
Indybay Feature
Related Categories: Central Valley | Environment & Forest Defense
Labor and Environmental Groups Ask Governor to 'Protect People and Not Polluters
by Dan Bacher
Tuesday May 19th, 2020 11:15 AM
"Workers in the fossil fuel industry, like workers in every industry, should receive direct relief during this crisis, and should receive transition assistance going forward as oil and gas production and use in California continues its inevitable decline." 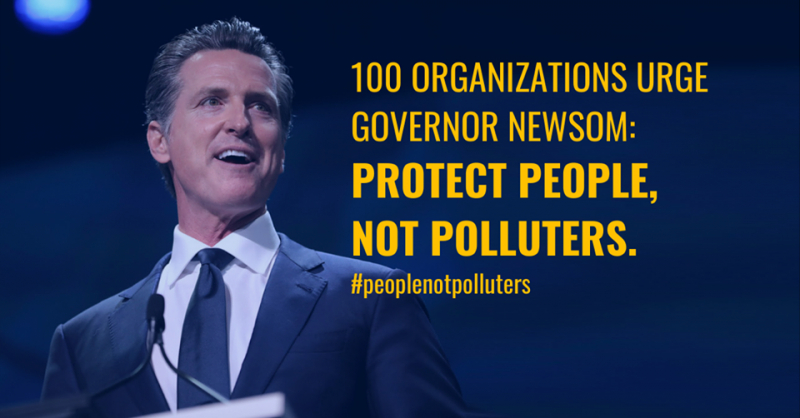 original image (960x502)
On May 18, a coalition of 100 labor and environmental groups sent a letter asking California Governor Gavin Newsom and California State Legislators to “protect people and not polluters” during this unprecedented coronavirus pandemic.

The letter was issued at time when Newsom has showed increasing signs of caving to the fossil fuel industry. As oil prices crashed to below zero at one point and dozens of oil tankers idled off the California coast, new oil and gas drilling permits increased 7.8 percent under Governor Gavin Newsom during the first quarter of 2020 through April 4 as compared to the first quarter of 2019, according to a report issued by Consumer Watchdog and the Fractracker Alliance on May 7.

In addition, California’s Geological Energy Management Division (CalGEM) has indicated they will roll back regulatory requirements for the testing and cleanup of oil wells in the state: https://www.kqed.org/news/11817384/with-oil-industry-in-slump-state-offers-a-break-on-some-well-regulations

"I understand that the unprecedented economic impacts associated with the COVID-19 pandemic have caused significant, unanticipated financial constraints on your members," stated State Oil and Gas Supervisor Uduak-Joe Ntuk in letters to the Western States Petroleum Association and the California Independent Petroleum Association. On May 1, state oil and gas regulators published the changes in a notice on the CalGEM website.

Meanwhile, on Thursday, the Newsom administration announced that it was cancelling a new plan to hire 53 new staff to regulate the oil and gas industry as the revised May state budget was released, even though funds for positions would be paid by the industry itself.

Labor groups, including the Federation of Teachers Local 1931, United Domestic Workers and UFCW Local 324, today joined climate and environmental justice groups in calling on Newsom to resist fossil fuel bailouts and instead use coronavirus recovery funds to support workers and communities.

To address the interlinked COVID-19, climate, health, environmental justice, housing, and economic crises California faces, labor and environmental organizations called in their letter for policies that:

Provide wage replacement with no strings attached.
Broaden the eligibility of the earned income and childcare tax credits to include all immigrants.
Provide high-quality healthcare for everyone, including expanding Medi-Cal to all workers regardless of immigration status.
Strengthen the right to workplace organizing and enhance critical protections or all workers, including farmworkers and domestic workers.

The letter to Newsom and California legislators states:

"Thank you for your leadership on COVID-19. We recognize that this is a challenging time for everyone and applaud your bold, science-based leadership to protect Californians. As you consider options to address the economic damage and individual hardship created by COVID-19, we request that you continue this important work by using your authority to protect people rather than polluters. Specifically, we urge you to focus relief and stimulus funds on actions that promote equity and support healthy communities free of pollution, and that you reject any measure that includes giveaways or waivers for fossil fuel corporations or their executives.

Workers in the fossil fuel industry, like workers in every industry, should receive direct relief during this crisis, and should receive transition assistance going forward as oil and gas production and use in California continues its inevitable decline. However, there should be no funding for fossil fuel corporations, executives and shareholders, and recovery funds must not be used to promote fossil fuel production or infrastructure."

“The immediate response must focus on providing emergency relief directly to the workers and communities who need it.

There must be absolutely no funding for fossil fuel corporations, executives and shareholders nor any measures that would promote fossil fuel production or infrastructure.

Recovery funds should provide long-term security to workers and communities impacted by the needed transition away from fossil fuels.”

“We need relief measures that protect people and help create a more just, equitable, and sustainable economy as we close the book on fossil fuels. We are looking to you for this leadership.”

Newsom has continued Governor Jerry Brown’s expansion of oil and gas drilling in California since he became Governor in January 2019. Consumer Watchdog and FrackTrackerAlliance reported that the Newsom Administration issued 1,623 permits during the first quarter of the year. The California Department of Conservation on April 3 also approved 24 new fracking permits in Kern County during the midst of the COVID-19 Pandemic and after a nearly six-month moratorium on new fracking operations.

The number of oil permits issued under Newsom since he took office in January 2019 now comes to a total of 6,168. The permit numbers and locations are posted and updated on an interactive map at the website: NewsomWellWatch.com

Here is the long list of organizations that signed the letter: