Add an Event
Newswire
Calendar
Features
Home
Donate
From the Open-Publishing Calendar
From the Open-Publishing Newswire
Indybay Feature
Related Categories: Central Valley | Environment & Forest Defense | Government & Elections
Delta Tunnel Forges Ahead in Pandemic: Agreement in Principal Reached for SWP Contract Amendment
by Dan Bacher
Wednesday May 13th, 2020 9:28 AM
It is very clear that the Department of Water Resources and water contractors don’t really care what the public and the people most impacted by the Delta Tunnel think, based on their obsession with pushing the tunnel project through at this time. 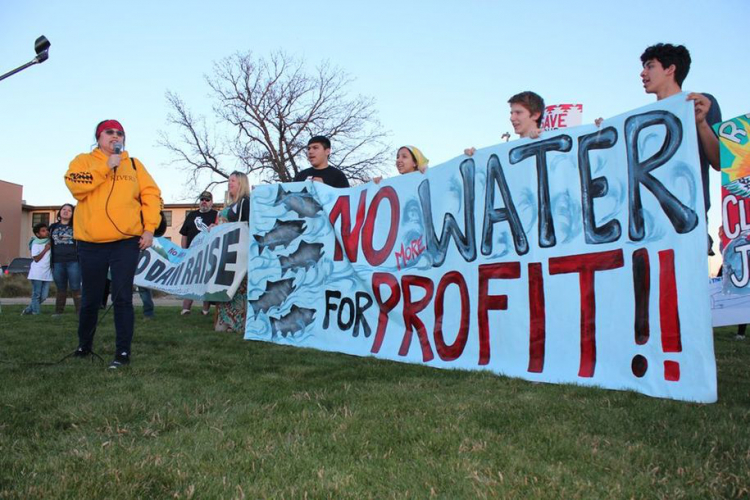 original image (915x610)
On April 30 during the midst of the COVID-19 Pandemic, the negotiators for the Department of Water Resources and the State Water Contractors finalized an Agreement In Principle (AIP) for the State Contract Amendment for Delta Conveyance, according to a notice sent out on May 11 by the Kearns and West Facilitation Team.

This is a significant step in the process to push forward the Newsom Administration’s Single Delta Tunnel. Of course, this negotiation of this agreement took place despite strong opposition by the majority of Californians, including recreation anglers, commercial fishermen, conservationists, Tribal leaders, family farmers, Delta business owners, elected officials and the public.

The vast majority of the public opposed the project when it was the environmentally destructive and enormously costly Peripheral Canal in November 1982, when Governor Schwarzenegger and Governor Brown transformed it into the twin Delta Tunnels and again when it became Governor Newsom’s Delta Tunnel in February 2019.

“On April 30, 2020, The AIP and accompanying White Paper (Attachment 1) are complete except for the table of Public Water Agency Delta Conveyance Facility Allocation Factors,” the Kearns and West Team announced. “ The negotiators plan to reconvene for one additional meeting to complete this table. We will send a notification email once the next meeting date is confirmed.”

“The edited versions of the AIP and White Paper from Negotiation Meeting #15 that occurred in the meeting on April 29th and continued on April 30th, the edited versions by Kearns & West, the facilitation team, and the Final AIP version (Document #141) and Final Attachment 1: White Paper (Document #142) pertaining to the SWP Contract Amendment for Delta Conveyance meetings are posted on the DWR Box site, here: https://cadwr.box.com/s/irusyewojv4nwzmxfznghzmgli9sswcw.

As I receive comments and analyses of the Agreement in Principle, I will post them here.

In other Delta Tunnel news in a parallel process, Scott Anderson reports for the Sacramento News and Review blog: “Members of a committee designed to ensure Delta communities and tribal groups have their say in a proposed, life-changing tunnel project have been told to work through the coronavirus pandemic—or be left out of the process. Some committee members also claim that state officials misrepresented that fact to one of the most important commissions monitoring their efforts.”

“The dust-up has caused Sacramento County Supervisor Don Nottoli to challenge one state official about transparency, while the Delta Protection Commission has officially asked California planners to halt their work on the tunnel during the virus outbreak. So far, that hasn’t happened,” said Anderson.

“The rift between members of the Delta Conveyance Design and Construction Authority’s Stakeholder Engagement Committee, or SEC, and state officials came into glaring focus at an April 9 virtual meeting of the Delta Protection Commission,” Anderson continued.

It is very clear that the Department of Water Resources and water contractors don’t really care what the public and the people most impacted by the Delta Tunnel think, based on their obsession with pushing the tunnel project through at this time. The only thing they appear to care about is taking advantage of an unprecedented pandemic to push through a project that will serve the interests of wealthy agribusiness interests like Stewart and Lynda Resnick, the owners of the Wonderful Company, and the water brokers at the Metropolitan Water District of Southern California.

It is very telling that in the hundreds of hours I’ve spent in project hearings under three governors since 2007, not one of the project promoters has been able to answer my one simple question: Can you give me a single example in world or U.S. history where a project designed to divert more water from an estuary or river has resulted in the restoration of that estuary or river?

That’s because the project promoters know that a project that will take more water from a river, the Sacramento, before it reaches the estuary will destroy that estuary — and not restore it as they contend. They know that the project has no scientific, economic or financial basis and will result in the extinction of already imperiled fish species including the Delta smelt, longfin smelt, Central Valley steelhead, winter run Chinook salmon, spring run Chinook salmon and other species.

Stevenson also personally told DWR and the crowd at the meeting, “Resistance is our duty and right. Non-violent resistance must be taken to address and counteract broken treaties, treaties and cultural ways of life. Non violent direct action will be the answer.”

Annelia Hillman of Orleans, Yurok Tribal Member and artist, set the tone for that evening when she got the crowd chanting "Shut it Down!” during a rally of members of Northern California Tribes and their allies before the meeting. Hillman said it’s time for disruption, pointing out that this disruption should take place in two ways — the personal and the systemic.

“First, it’s got to start with us by making small changes,” she said. “Change the way you eat. Stop buying Cuties and pistachios.”

“The other thing we need to do is disrupt the system,” Hillman stated. “Get angry. It’s time to fight — we don’t have time left. The destruction needs to stop. It will affect the Klamath — and we won't let it happen. Shut it down!”

It is telling that during the scoping meeting, not single member of the public, whether tribal members, environmentalists, anglers or local elected officials, spoke out for the project. That’s because only wealthy agribusiness owners, lobbyists, water district officials, corporate interests and a captured state government support the project. The Newsom Administration administration must come to its senses and stop this project!

Photo: Annelia HIllman, Yurok Tribal Member, speaks at a rally before the last Delta Tunnel scoping meeting in Redding on March 2 where over 200 members of Northern California tribes and their allies stood up against the tunnel project. Photo by Dan Bacher.