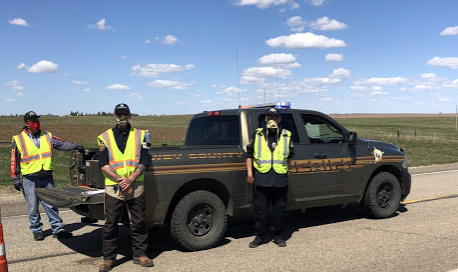 Chairman Frazier reaffirmed the tribe's position to protect its members during this time, as the coronavirus spreads through South Dakota.

Chairman Frazier said South Dakota Gov. Kristi Noem did not contact him -- but instead made statements in the media with threats over the tribe's border checkpoints.

In her media statements, Gov. Noem threatened to file suit if the Cheyenne River Lakota and Oglala Lakota if they did not take down their health checkpoints at their borders.

"We found it in the press, in the media," Chairman Frazier said during his live weekly update on Saturday. Since he was never officially contacted, he said he didn't know when the 48 hours ends.

"There is nothing more important than human life," Chairman Frazier said. "As human beings, we have a right to live. That is one of the greatest rights that we have, the right to live."

Chairman Frazier said prior to the Treaty making era, Lakota lived under the Creator's law, and after Treaties came about, Lakotas started living under man-made laws which can be changed by people.

During his weekly address on May 9, Chairman Frazier said, there have been 77 tests with 76 negative and one positive. We have 240 test kits available. He pointed out that there are new cases in South Dakota, including those at Sisseton and Rosebud.

The virus does not care who you are or where you live, he said.

In a letter of support to Chairman Frazier from Sisseton-Wahpeton Oyate, Delbert Hopkins, Jr., pointed out that a non-member entered the Enemy Swim housing district of Sisseton-Wahpeton and infected nearly one dozen people over a period of a few weeks.

"Let's the checkpoints stay until it is safe to remove them," said Hopkins, at the Lake Traverse Nation in northeastern South Dakota.

Chairman Frazier responded to the governor's fiery rhetoric with a written statement.

"The English definition of consultation is "a meeting with an expert or professional, such as a medical doctor, in order to seek advice." In the Lakota language, wóglaka means "to speak about something." In meeting with county commissioners, municipal, South Dakota Department of Transportation, Public schools and Federal agencies we have met the definition of consultation in both of our languages."

"We have not stopped any state or commercial functions as you claim in your request," Frazier said in his statement.

"I absolutely agree that we need to work together during this time of crisis, however you continuing to interfere in our efforts to do what science and facts dictate seriously undermine our ability to protect everyone on the reservation," the statement said. "Ignorant statements and fiery rhetoric encourage individuals already under stress from this situation to carry out irrational actions."

Copyright Brenda Norrell, Censored News
https://bsnorrell.blogspot.com/2020/05/che...
Add Your Comments
Support Independent Media
We are 100% volunteer and depend on your participation to sustain our efforts!