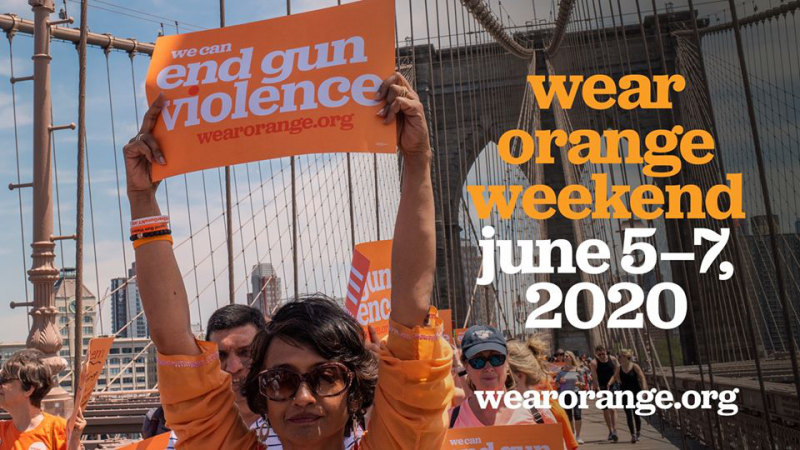 Join the millions of Americans who will #WearOrange for National Gun Violence Awareness Day (first Friday in June) to honor victims and survivors of gun violence and show support for common-sense solutions to the gun violence crisis.

Wear orange wherever you are, then share why you are wearing orange—along with a photo—on social media. Be sure to include the #WearOrange hashtag!

The “Wear Orange” campaign was inspired by a group of Chicago teens that asked classmates to commemorate the life of their friend, 15-year-old Hadiya Pendleton, who was shot and killed one week after marching in President Obama’s second inaugural parade – by wearing orange, a color that hunters use to protect themselves in the woods.

What started in their high school has grown into a national movement, elevating orange as a symbol for the value of human life – and a way to visibly honor the 88 Americans lives cut short by gun violence every day, plus the countless survivors forever altered by shootings
each year.
END_OF_DOCUMENT_TOKEN_TO_BE_REPLACED
Added to the calendar on Sat, May 9, 2020 6:38PM
Add Your Comments
Latest Comments
Listed below are the latest comments about this post.
These comments are submitted anonymously by website visitors.
TITLE
AUTHOR
DATE
Open Letter to mother of Ahmaud Arber by Rep. Lucy McBath & other moms of gun victims
Rep. Lucy McBath & other moms
Support Independent Media
We are 100% volunteer and depend on your participation to sustain our efforts!