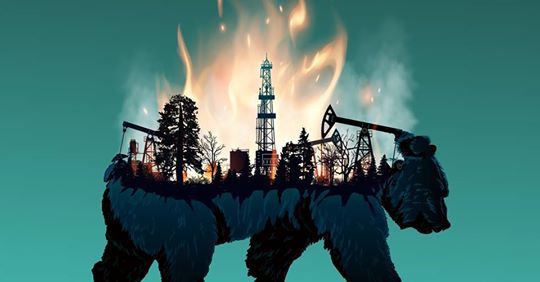 Los Angeles — As the price of oil plunged to below zero and dozens of oil tankers carrying over 20 million barrels of oil idled off the California coast, new oil and gas drilling permits actually increased 7.8 percent under Governor Gavin Newsom during the first quarter of 2020 through April 4 as compared to the first quarter of 2019, according to a report issued by two watchdog groups on May 7.

Consumer Watchdog and FrackTrackerAlliance reported that the Newsom Administration issued 1,623 permits during the first quarter of the year. The California Department of Conservation on April 3 also approved 24 new fracking permits in Kern County during the midst of the COVID-19 Pandemic and after a nearly six-month moratorium on new fracking operations.

The number of oil and gas permits issued under Newsom since he took office in January 2019 now comes to a total of 6,168, the groups stated. The permit numbers and locations are posted and updated on an interactive map at the website: NewsomWellWatch.com

“This is terrible news during an unprecedented pandemic,” said Liza Tucker, Consumer Advocate for Consumer Watchdog. “Now that scientists have established a correlation between air pollution caused by the production and combustion of fossil fuels and greater susceptibility to death from Covid-19, issuing zero permits would have been the right thing to do.”’

”On top of that, experts tell us that Californians could be liable for $9 billion in cleanup costs for existing oil and gas wells that are or will be eventually abandoned, so we should not be greenlighting even more wells,” she stated.

Tucker noted that the California Geologic Energy Management Division, a branch of the Department of Conservation, issues two main categories of permits: permits to drill new oil and gas wells and permits to rework existing wells. Permits are issued for different types of well activities, including “Enhanced Oil Recovery Wells” (EOR) that use cyclic steaming and water flooding to dislodge oil.

Permits for drilling new wells rose 27.2%, while permits for reworking existing wells fell 13.4% “in a sign that oil companies are literally scraping the barrel,” according to Tucker.

Approximately 10% of permits issued during the first quarter of 2020 have been issued within 2,500 feet of homes, hospitals, schools, daycares or nursing facilities. This compares to 12.2 percent for all of 2019, according to the organizations.

“In addition to Volatile Organic Compounds (VOCs) being both air toxics and carcinogens that negatively impact frontline communities, these pollutants are precursors to the regional ozone and smog pollution that causes health impacts such as asthma, COPD, cardiovascular disease, and negative birth outcomes,” said Ferrar.

According to the U.S. EPA, oil and gas production is a main contributor of VOCs and smog-forming nitrogen oxides in the San Joaquin Valley. Beyond the Valley, the American Lung Association in its annual State of the Air report gave 62% of California’s 58 counties “Ds" and “Fs" for air quality. See: http://www.stateoftheair.org

The number of permits issued under Newsom in 2019 reached virtually the same level as the number issued in 2018 under Governor Jerry Brown during his last year in office—even though Newsom fired state Oil & Gas Supervisor Ken Harris last July, according to the report.

In July 2019, the two groups revealed that eight oil regulators were invested up to hundreds of thousands of dollars in oil companies they regulated, permits for new production wells had risen by a runaway 77% over the first six months of the year before and fracking permits had doubled, even though Newsom campaigned on a platform of support for banning the practice.

Newsom was angered to hear about the increase in fracking permits — saying he was not aware of it — and then placed a moratorium on fracking permits pending an independent third-party review by the Lawrence Livermore National Laboratory while the Fair Political Practices Commission (FPPC) investigated the regulators.

The Lawrence Livermore Laboratory is now reviewing another 282 fracking permits, but fracking opponents are not optimistic about the outcome. “The lab was hired to confirm that the permits met state regulatory standards, which have a low bar and virtually no thorough environmental review,” said Tucker.

CalGEM issued the following response to Consumer Watchdog and Fractracker Alliance’s report, stating that a “simple total of permits doesn’t reflect actual oil production trends” and that most of the well permits issued by CalGEM were for plugging and abandonment:

“We are not aware of the source or methodology for Consumer Watchdog’s numbers. However, a simple total of permits issued doesn’t reflect actual oil production trends. That is because not all permits issued are for new drilling. During the timeframe Consumer Watchdog tracked, the majority of well permits issued by CalGEM were for plugging and abandonment (which is to permanently seal a well) – nearly a 2:1 ratio. Only in the month of March, 2020 did that ratio not apply. That was due to the court ruling in Kern County that set a March 25 deadline for permit applications under the existing rules."

CalGEM also disagrees with the groups’ contention that the state regulatory standards for issuing fracking permits have a “low bar”:

"The recent 24 well stimulation permits is the lowest number issued in a calendar year since the implementation of SB4. Those permits were issued under the strictest of standards and after an independent scientific assessment by the Lawrence Livermore National Laboratory to ensure they comply with California law, including the state’s technical standards to protect public health, safety, and environmental protection. LLNL also evaluated the completeness of operators’ application materials and CalGEM’s geotechnical analyses.

The independent scientific review is one of Governor Newsom’s initiatives to ensure oil and gas regulations protect public health, safety, and the environment. This review, which assesses the completeness of each proposed hydraulic fracturing permit, is taking place as an interim measure while a broader audit is conducted of CalGEM’s permitting process for well stimulation. That audit is being conducted by the Department of Finance Office of Audits and Evaluation (OSAE) and will be completed and shared publicly later this year."

More details on the findings of LLNL’s scientific review to date can be found on CalGEM’s website: https://conservation.ca.gov/calgem/Pages/Well-Stim-National-Lab-Scientific-Review.aspx

Although Governor Jerry Brown’s enthusiasm for the expansion of oil and gas drilling is quite understandable, since he received over $9.8 million from oil companies, gas corporations and utilities during his administration, Newsom signed a pledge to not take oil money contributions during his gubernatorial campaign.

The rationale for Newsom continuing Brown’s oil well expansion is somewhat puzzling; some political insiders believe that he may be considering a presidential run and may not want to alienate the oil companies as potential campaign donors at this time.

What is even more puzzling is why would oil companies be in a position to drill for oil during the midst of the coronavirus crisis when there is no economic incentive while U.S. prices go into the toilet and dozens of oil tankers, with nowhere to go because of oil price collapse, are idling off the California coast?

Oil prices fell in half in 2014 and oil companies couldn't cover the costs of their fracking operations, so they borrowed like crazy and burned through their money. As a result, there are going to be hundreds of oil company bankruptcies and no reason to frack at this time.

She said there is no reason for the Newsom Administration to issue new permits including fracking permits when the oil prices have fallen through the floor and health experts have connected the combustion of oil and gas and chronic exposure to air pollution to a greater risk of contracting and dying from COVID 19.

Oil industry leaders acknowledge the dire straits the industry is in at this time: http://www.nytimes.com/...

“You can’t produce it, you can’t refine it and you can’t sell it,” Catherine Reheis-Boyd, president of the Western States Petroleum Association, and former Chair of the Marine Life Protection Act (MLPA) Initiative Blue Ribbon Task Force to create “marine protected areas” in Southern California, told the New York Times on April 28. “That ain’t a good situation to be in.”

One thing, though, is certain: the oil industry usually gets what what it wants in California. From January 1 to March 31, 2020, the same time that the Newsom Administration approved 1,623 new permits, the Western States Petroleum Association (WSPA), the largest and most powerful corporate lobby in California, spent $1,089,702 lobbying state officials during the period.

You can expect the lobbying spending by WSPA, Chevron and the oil industry to amp up now that the California Legislature is back in session.

In 2019, California regulators issued 4,545 oil and gas drilling permits, apparently due to the massive lobbying spending by the Western States Petroleum Association, Chevron and other oil industry lobbyists to continue Governor Jerry Brown’s expansion of oil and gas drilling after Newsom became governor in January 2019.

Spending by WSPA, Chevron and other oil companies was also successful last year in preventing the Legislature from approving Assemblymember Al Muratsuchi’s AB 345, a bill to ensure that new oil and gas wells not on federal land are located 2,500 feet away from homes, schools, hospitals, playgrounds and health clinics. Assemblymember Lorena Gonzalez made it into a two-old bill after pulling the bill from the Assembly Appropriations Committee that she chairs last May 16.

However, despite the flurry of oil industry spending on AB 345 and other bills last year, the bill made considerable progress this year in the Legislature before they went into recess because of the COVID-19 Pandemic, passing the Assembly Floor by a vote 42 to 30 on January 27.

AB 345 is currently in the Senate. The bill has been read for the first time and has gone on to the Committee on Revenue & Taxation (RLS) for assignment. You can bet that the oil industry will do everything they can from stopping this bill from making it to the Governor’s Desk.

WSPA and Big Oil wield their power in 6 major ways: through (1) lobbying; (2) campaign spending; (3) serving on and putting shills on regulatory panels; (4) creating Astroturf groups: (5) working in collaboration with media; and (6) contributing to non profit organizations. For more information, read: http://www.counterpunch.org/...
Add Your Comments
Support Independent Media
We are 100% volunteer and depend on your participation to sustain our efforts!