Add an Event
Newswire
Calendar
Features
Home
Donate
From the Open-Publishing Calendar
From the Open-Publishing Newswire
Indybay Feature
Related Categories: Santa Cruz Indymedia | Health, Housing & Public Services
Prodded by Right Wingers, Santa Cruz Businesses Operate Outside of Health Restrictions
by Santa Cruz News
Thursday May 7th, 2020 8:31 PM
The "Committee to Reopen Santa Cruz,” a group founded recently by right wing extremists who believe the COVID-19 Pandemic is a hoax, is prodding local businesses to open early. The group has announced that the Om Gallery on Pacific Avenue is opening to two shoppers at a time from 1-5pm on Friday, May 8, by appointment. The Committee to Reopen Santa Cruz also plans to do "guerrilla yoga" at a studio that will secretly open its doors for the group. "Some studios are opening the back door for the cool kids club. No Snitches," a flyer for a May 8 "Freedom Friday" protest states. On May 6, the Santa Cruz County Health Officer updated restrictions to retail businesses to now include curb side delivery, but non-essential businesses are still being prohibited from allowing customers inside their stores. The Committee to Reopen Santa Cruz was founded by an unlikely trio: Santa Cruz local Linda "Ellie" Black, the former Republican State Assembly candidate who lost to Bill Monning in 2010; David Rodriguez, an education consultant and Libertarian activist from San Jose; and Howard Lichtman, a tech consultant from Ashburn, Virginia, who is also known as "Etienne de la Boetie 2," a right wing conspiracy blogger who has published over 300 entries since 2005, including support for the Oath Keepers, a far-right, racist organization associated with the militia movement. 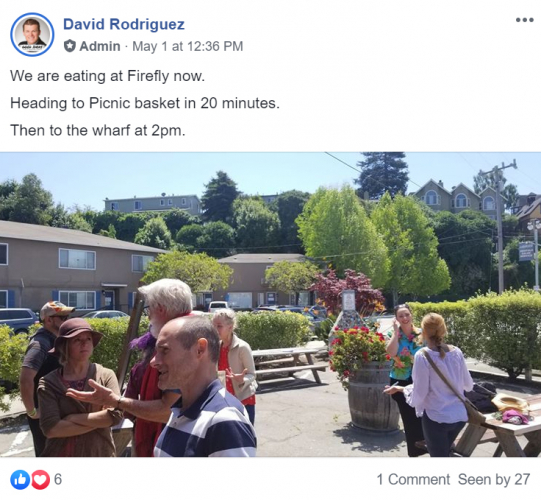 original image (736x679)
[Photo: Howard Lichtman and others gather without masks at Firefly Coffee in Santa Cruz on May 1 for a meeting of the Committee to Reopen Santa Cruz.]


Members of the Committee to Reopen Santa Cruz are contacting local businesses directly, asking them to open up, and participate in the protests.

"We especially need a restaurant owner willing to both open and speak publicly," Howard Lichtman posted on social media in advance of the May 8 protest. "We also need a venue or private home to screen the documentary:How to Start a Revolution, on Friday night."

"Ask the owner of your favorite restaurant or bar owner if they want to reopen tomorrow," David Rodriguez posted on social media on April 30.

On May 3, the Om Gallery, which is located on Pacific Avenue in downtown Santa Cruz, posted a message on their Facebook page suggesting they were opening. “Thank you for your continuous support,” the post read. “We are working on making Om Gallery available to you sooner than you think!” The Om Gallery is a new age/religious themed gift store that sells crystals, paper lamp shades, and other gifts. On April 20, a customer left a review for the Om Gallery on Facebook, stating that she had shopped at the store, which was outside of the County’s health restrictions.

“I needed a gift for a friend during COVID-19 SIP. I was able to shop online and then pick up at the store,” the customer wrote. “ [Om Gallery owner] Max Halterman was so accommodating and helpful.”

On a flyer to be distributed to local businesses, Linda "Ellie" Black wrote: "Does this sound like a pandemic to you? No. It sounds like a flu season. When has it ever made sense to shut down the world and potentially destroy the livelihoods - or loves, via starvation - of millions of people over a bad flu?"

During her campaign for State Assembly in 2010, Black opposed Obama's health care plan.

On May 6, Black stated in the Committee to Reopen Santa Cruz Facebook group that their knowledge level in the group was essentially superior to that of others in the community. She wrote:

"It's easy to get frustrated with others, who don't "know" what we know, who seem to be blind followers. But we must remember that WE know why they are that way, that the system was designed to make them that way."

Members of the Committee to Reopen Santa Cruz are calling the Coronavirus Pandemic a "plandemic" and they encourage people not to wear masks, as recommended by health officials.

"Coronavirus is a giant hoax against humanity," David Rodriguez posted. "The government has zero authority to shut down small businesses so we're fighting to help reopen these businesses."

"Government is organized crime and has zero authority to force people to stay inside their homes," Rodriguez wrote on social media on May 7. “Even if there was a million COVID deaths," he added.

Rodriguez has ties to the anti-vaccination movement, raising funds in 2019 to create the "GATTO Project" as a "solution for forced schooling, forced curriculum, and forced vaccines."

Howard Lichtman, founder of the Art of Liberty Foundation, an extreme Libertarian political organization, wrote a lengthy COVID-19 prospectus for the foundation’s website. The prospectus stated, in part:

Posting as “Etienne de la Bootie2,” a pseudonym inspired by the French writer from the 16th century, Lichtman also wrote extensively about the H1N1 virus pandemic of 2009 (also known as swine flu) in his blog "The Discourse of Involuntary Servitude".

In a post from March 9, 2009 titled "FEMA Camps Already Built and Waiting for YOU,” Lichtman posted a map of “future” FEMA camp locations and wrote:

"The ruling elite is about to pull the velvet glove off the iron fist and are developing all the necessary pieces they need for complete tyranny. After the economic collapse and probable engineered pandemic they will need camps for dissidents and a surveillance grid for the masses. Watch as this is developing around you while you sit and stare at idiocy on the teevee."

Previously, on February 9, 2009, Lichtman wrote an article titled "Obama and mother both employed by the CIA?” for the Discourse of Involuntary Servitude blog. “The mainstream media sold us Barack Obama. They sold him us a person who would bring about change. But they missed some things out,” Lichtman wrote, going on to lay out a theory that Barack Obama and his mother were CIA agents in the 1980s.

Lichtman has traveled to meet with right wing and Libertarian groups all over the world. Recently he boasted on social media that he spoke at a protest also attended by Ammon Bundy, who led the 2016 occupation of the Malheur National Wildlife Refuge, and is the son of rancher Cliven Bundy, who was central in the 2014 Bundy standoff over unpaid grazing fees on federally-owned public land.

Other topics Lichtman has written about include: 911 false flag, Oklahoma bombing false flag, Waco murder and cover up, and the Oath Keepers. Lichtman has also written extensively in support of the ideas of Alex Jones of Infowars

Two "Re-Open Santa Cruz" protests have been organized to date. On April 24, Libertarian activist and UC Santa Cruz student Sean Cutler obtained a permit from the City of Santa Cruz for a protest at City Hall that was attended by a handful of individuals. The April 24 protest was promoted by the Libertarian Party of Santa Cruz County on social media, and individually by the local party's Chairperson, Paul Lazaga.

David Rodriguez and Howard Lichtman, who are not residents of Santa Cruz County, became extensively involved in the organization of the May 1 “re-open” protest in Santa Cruz, which they called "Freedom Friday". Rodriguez and Lichtman have collaborated on political projects together for years.

On April 30, the Committee to Reopen Santa Cruz Facebook group was created, with administrators listed as Ellie Black, Howard Lichtman, and David Rodriguez.

On May 1 the Committee to Reopen Santa Cruz posted photos of the group eating together at Firefly Cafe, stating they conducted a meeting at the business prior to that day’s Freedom Friday protest. The protest itself drew about two dozen participants who held signs near Cowell Beach. Howard Lichtman spoke ("Etienne de la Bootie2" was listed on an event flyer as a speaker at the protest).

In Facebook group discussions to organize their upcoming protest on May 8, Mike Lelieur suggested the idea of creating a protest sign that reads, "I need a haircut now! Open SC!"

Lelieur was elected as a member of the Central Committee of the Santa Cruz County Republican Party in the March 2020 election. He was also very active in the campaign to recall Progressive Santa Cruz City Councilmembers Chris Krohn and Drew Glover in 2019 and 2020.

In addition to being a place for political discussion, and to organize protests, the Committee to Reopen Santa Cruz Facebook group is being used by business owners to informally advertise services or products they are offering outside of the County Health Department's restrictions.

On May 1, Eileen Evans posted what looks like an ad to the Committee to Reopen Santa Cruz group stating that her hair salon, Simply Hair would be open on Saturday, May 2. “Please come and support. Call [...] for an appointment. Thank you,” she wrote. Evans then posted the “ad” to her business page the next day on Facebook.

On May 2, Evans reported to the Committee to Reopen Santa Cruz that business was good.

“Amazingly busy day at my salon today,” she wrote. “100% of clients expressed how they were SOOOO over the lock down and what it represents.” Simply Hair would now be open for business on Wednesday and Saturday, she wrote. “Please support local business,” she added.

In separate posts, Evans has also expressed her political beliefs in the Committee to Reopen Santa Cruz group, including sharing a link to a video clip of the “Plandemic” movie, which warns that “billionaire patent owners are pushing for globally mandated vaccines.”

On May 6, Evans notified the group that she had an encounter with law enforcement at her salon. “I own Simply Hair salon and just got a citation making a living,” she wrote. Evans said she plans to hire a lawyer to fight the citation, and that she will continue cutting hair at people’s homes.
§May 8 Protest Flyer
by Santa Cruz News
Thursday May 7th, 2020 8:31 PM 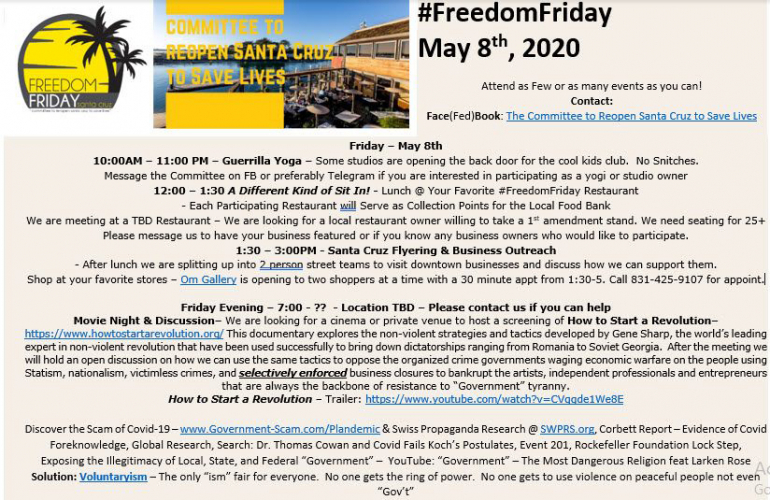 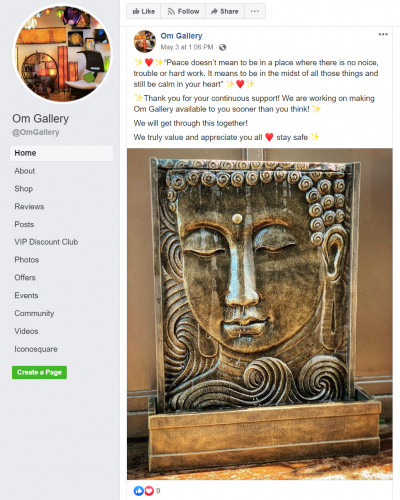 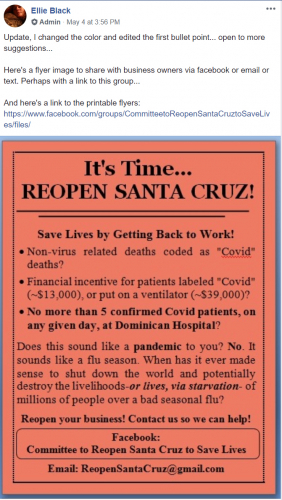 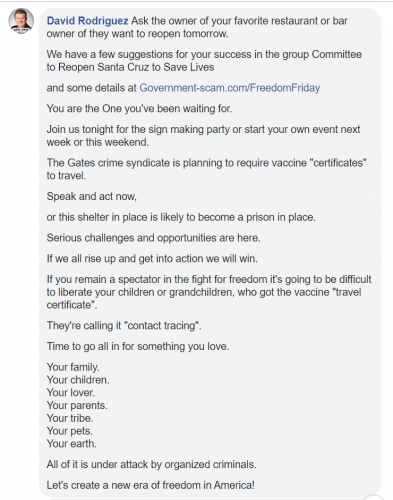 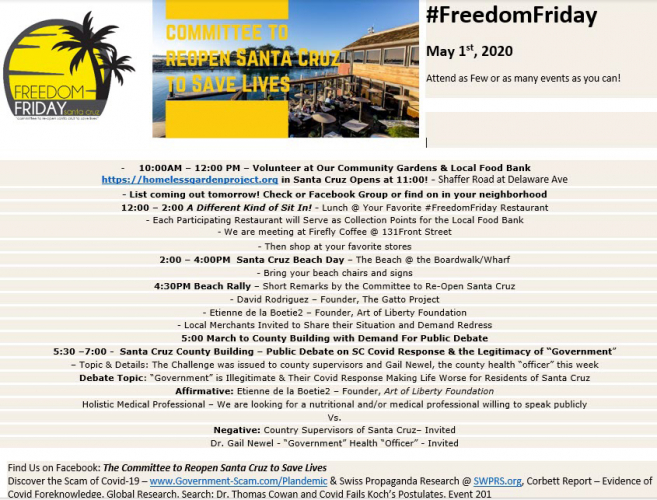 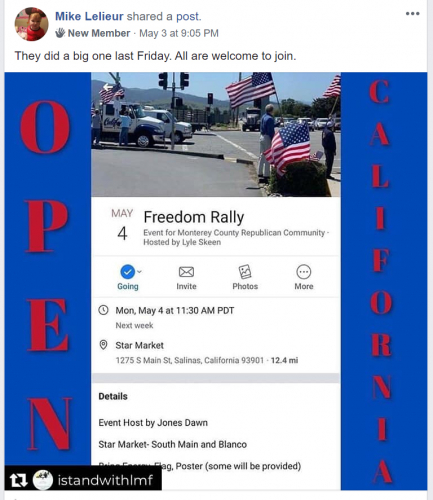 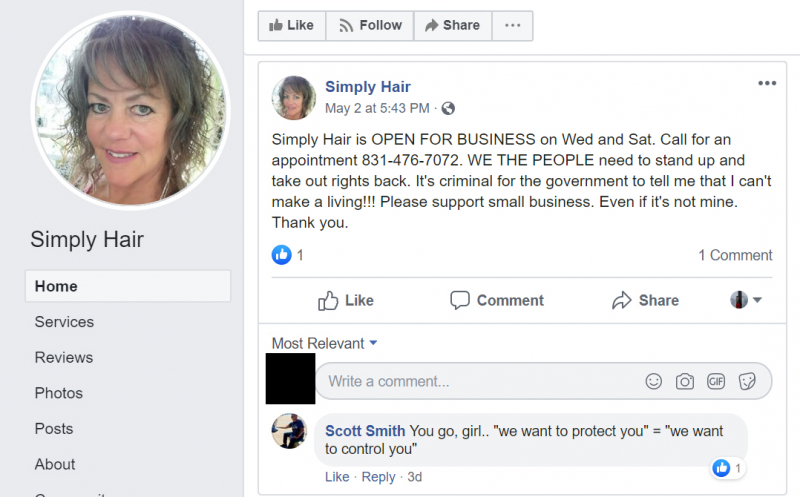 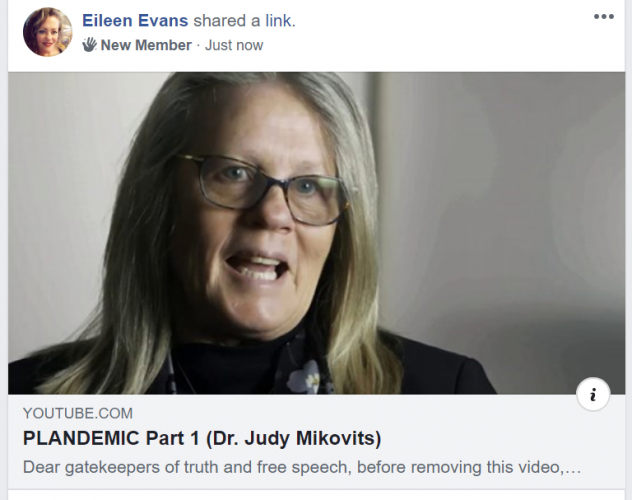 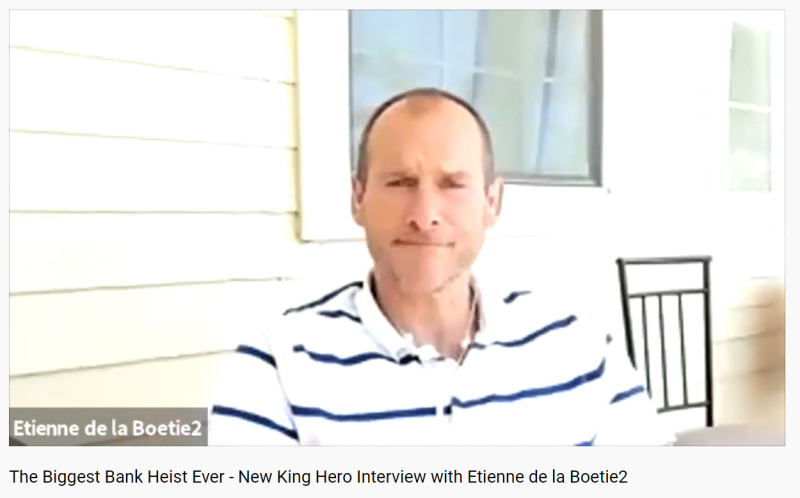 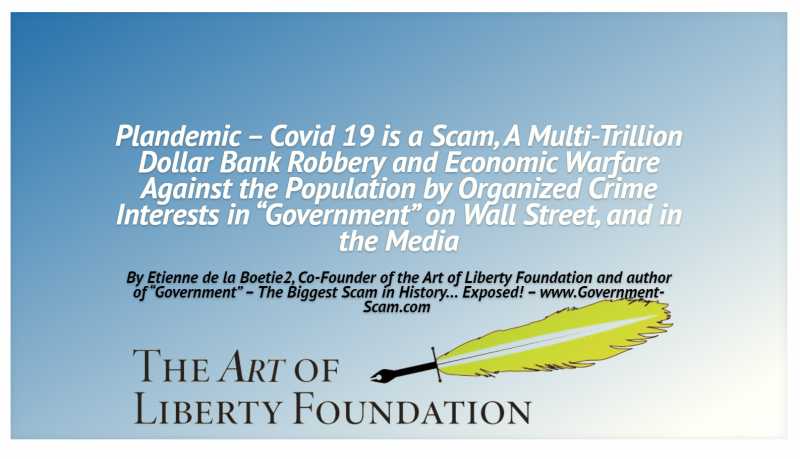 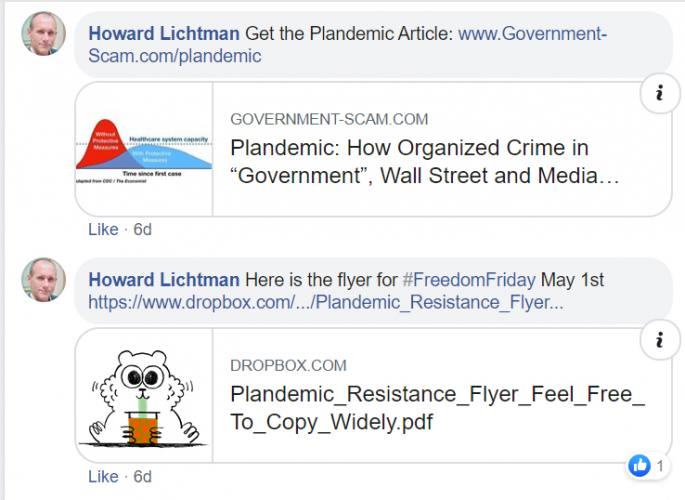 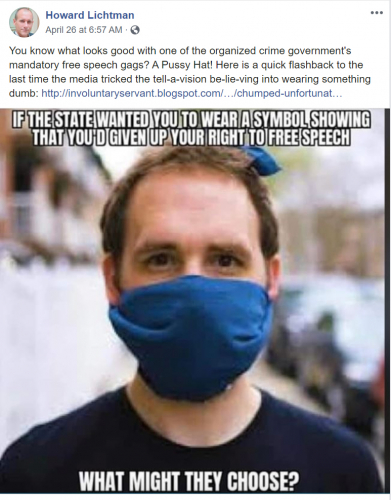 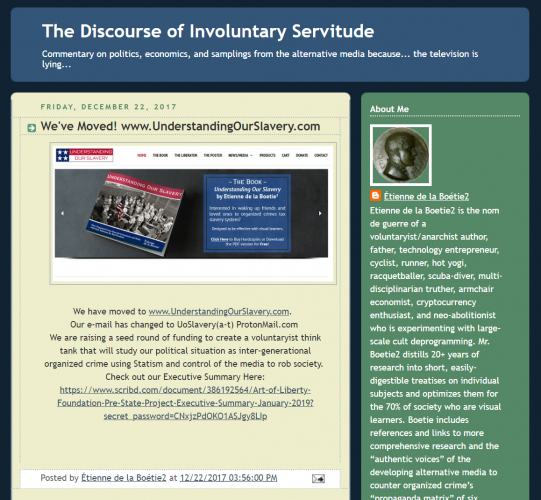 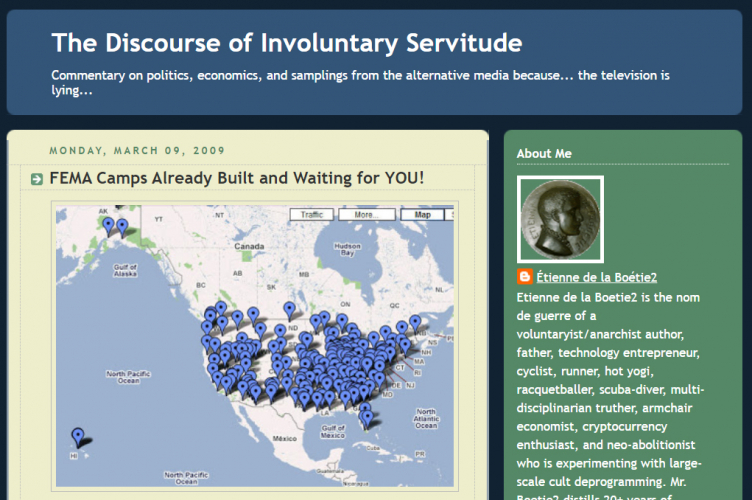 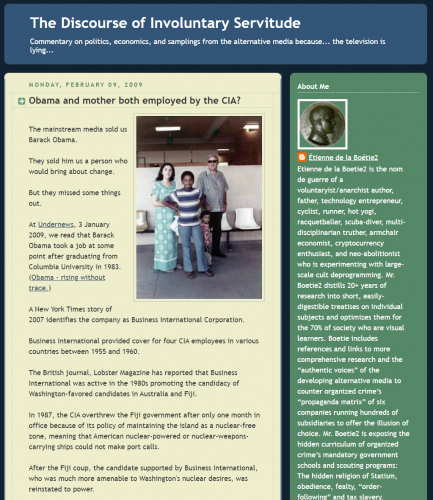 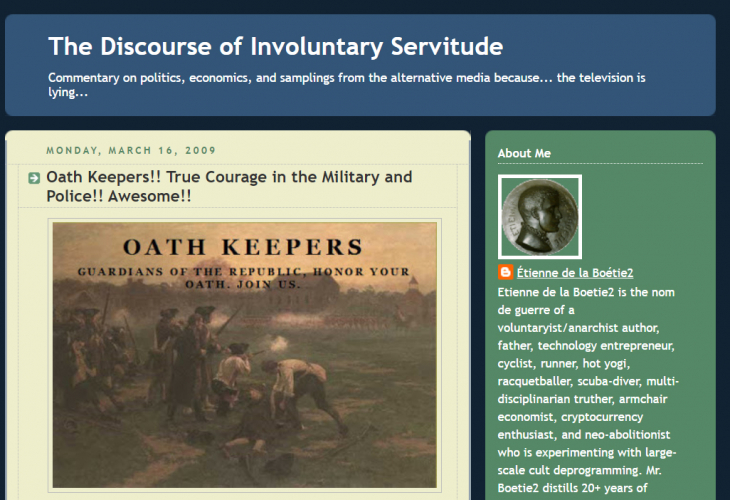 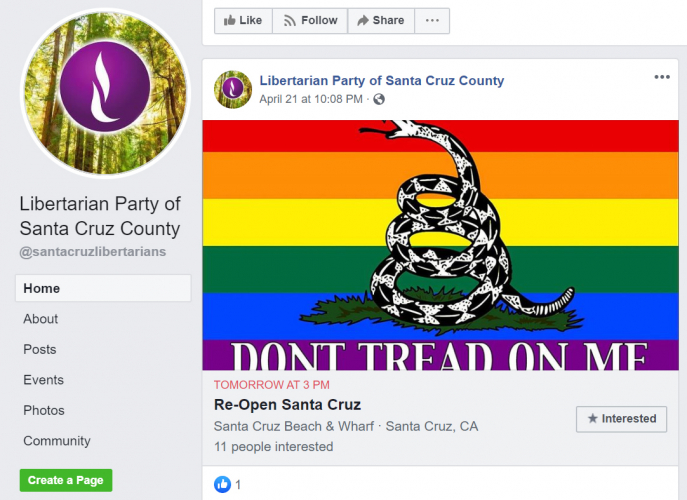 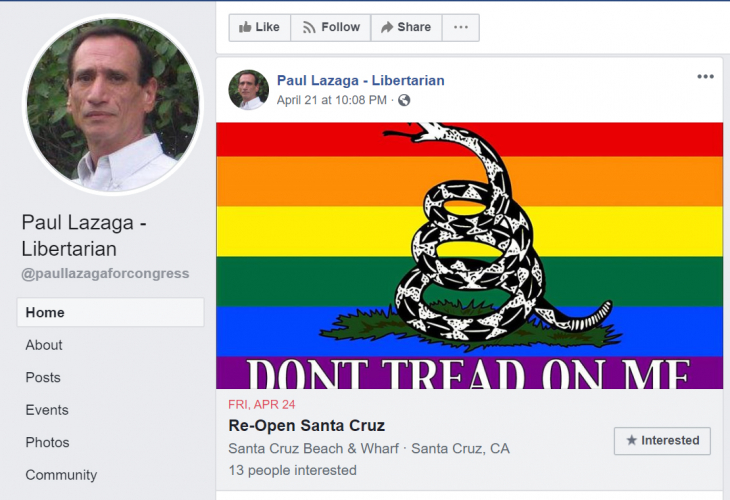 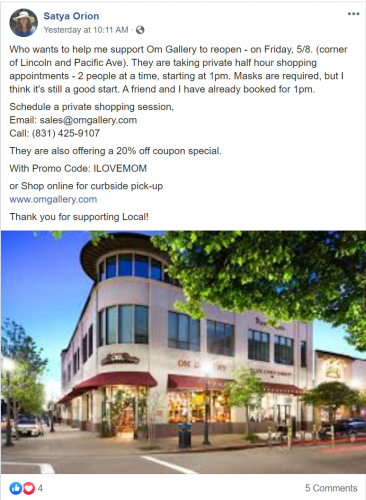 original image (773x1054)
Post on social media to support opening Om Gallery on May 8.
Add Your Comments
LATEST COMMENTS ABOUT THIS ARTICLE
Listed below are the latest comments about this post.
These comments are submitted anonymously by website visitors.