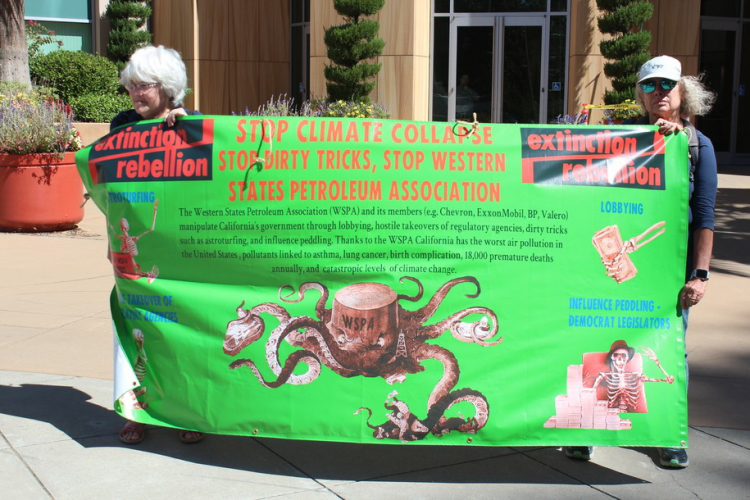 original image (915x610)
From January 1 to March 31, 2020, the Western States Petroleum Association (WSPA), the largest and most powerful corporate lobby in California, spent $1,089,702 lobbying state officials, according to financial data filed with the California Secretary of State on April 30.

Meanwhile, after the Legislature recessed at home during the coronavirus pandemic, U.S. oil prices collapsed below zero as California regulators approved 24 new fracking permits and expanded overall oil gas drilling in California. Dozens of oil tankers, with no place to store their crude, currently lurk off the coast.

According to the financial data filed with the Secretary of State, Chevron paid $59,705 in lobbying expenses to WSPA, in addition to the money it spent with different lobbying firms.

Other big lobbying spenders in the first quarter of 2020 include Aera Energy, formed in June 1997 and jointly owned by affiliates of Shell and ExxonMobil, with $290,826, and the California Resources Corporation, formerly Occidental Petroleum, with $213,489.

California Assembly Speaker Anthony Rendon has called the Legislature back into session on Monday, May 4, after the legislative session was interrupted by the pandemic.

“But it won’t be business as usual for California’s full-time Legislature after lawmakers agreed to their first sustained unscheduled work stoppage in 158 years,” according to the Associated Press. “They’ll be limited to having just one staff person with them and nurses will check their temperatures at the door, among other precautions.”

You can expect the lobbying spending by WSPA, Chevron and the oil industry to amp up after the legislation goes back into session.

While the Legislature was in recess, the State Department of Conservation on Friday, April 3 approved 24 new fracking permits in Kern County, the center of the oil industry in California, during the midst of the COVID-19 Pandemic and after a nearly six-month moratorium on new fracking operations.

Spending by WSPA, Chevron and other oil companies was also successful last year in preventing the Legislature from approving Assemblymember Al Muratsuchi’s AB 345, a bill to ensure that new oil and gas wells not on federal land are located 2,500 feet away from homes, schools, hospitals, playgrounds and health clinics. Assemblymember Lorena Gonzalez made it into a two-old bill after pulling the bill from the Assembly Appropriations Committee that she chairs last May 16.

It will be interesting to see if AB 345 makes it through the Legislature and gets signed by the Governor this year. Despite the flurry of oil industry spending on AB 345 and other bills last year, the bill made considerable progress this year in the Legislature before they went into recess because of the COVID-19 Pandemic, passing the Assembly Floor by a vote 42 to 30 on January 27.

AB 345 is currently in the Senate. The bill has been read for the first time and has gone on to the Committee on Revenue & Taxation (RLS) for assignment. You can bet that the oil industry will do everything they can from stopping this bill from making it to the Governor’s Desk.

Unlike many other oil and gas producing states including Texas, Colorado and Pennsylvania, supposedly “green” California currently has no health and safety zones around oil and gas drilling operations.

For example, the state of Texas requires the fracking operations maintain 250 foot setbacks from homes, schools and other facilities while the City of Dallas mandates 1500 foot setbacks around oil and gas wells.

For more information, go to: https://www.dailykos.com/story/2020/4/26/1940608/-The-struggle-against-California-s-expansion-of-fracking-continues-as-oil-prices-plunge
Add Your Comments
Support Independent Media
We are 100% volunteer and depend on your participation to sustain our efforts!