Add an Event
Newswire
Calendar
Features
Home
Donate
From the Open-Publishing Calendar
From the Open-Publishing Newswire
Indybay Feature
Related Categories: California | Health, Housing & Public Services
May 1 Actions to Counter “ReOpen America” Rallies; Demand Trump/Pence #OutNOW
by Curt Wechsler
Wednesday Apr 29th, 2020 11:10 AM
Join us to demand Trump, Pence, the whole fascist regime #OutNow in social distancing counter protest of the May 1st fascist rallies that demand the end to sheltering at home and demand their rights to disregard the health and lives of the most vulnerable. In contrast to this, unite with refuse fascism by saying Humanity first and in the name of humanity we refuse to accept a fascist America. 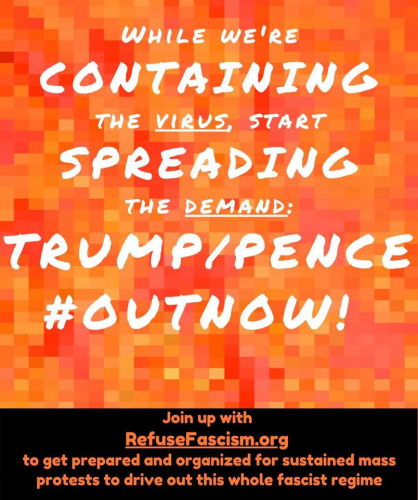 When: May 1, 2020
What/Where: RefuseFascism.org and supporters in San Francisco will hold a press conference at 11:30 am on Van Ness Avenue across the street from City Hall between Grove and McAllister Streets. Specifics of other locations to be announced. See Facebook page link below fo updates.

In contrast to the anti-scientific, fascist mobs holding “Reopen America” rallies – based on a callous disregard for public safety and human life – RefuseFascism.org supporters in several cities will hold counter-protests, press conferences, and symbolic actions, while observing social distancing and safe practices, to stand up for the needs of humanity and demand that the Trump/Pence regime must go NOW.

The Trump/Pence regime’s catastrophic response to the COVID-19 pandemic has already cost more than 50,000 lives in this country. Its attacks on science, embrace of end-times Christian fascists, its constant lying and bludgeoning of the very notion of truth, and white supremacist scapegoating of immigrants and foreigners threatens millions of more lives here and around the world. The U.S. now leads the world in COVID-19 cases and deaths.

Powerful fascist forces including the Koch-funded Convention of States Action, the Devos family, Infowars, and Trump himself have instigated, funded, and organized these rightwing rallies in order to support a president and regime that endangers the future of humanity and the planet. Far from standing up for civil or economic rights, these mobs are being unleashed to enforce and advance the fascist program of the Trump/Pence regime; a program of terror against immigrants; attacks on abortion rights; suppression of voting rights; rebellion against Democratic governors; scapegoating foreigners, political opposition, and the press; and open white supremacy. This is on full display at these rallies, where misinformation and conspiracy theories are peddled and many come heavily armed, waving their American and Confederate flags. They say the cure is worse than the disease when they know full well that COVID-19 is disproportionately affecting and killing Black people, poor immigrants, the infirm and elderly.

NO MORE COLLABORATING WITH A FASCIST REGIME THAT HAS DONE GREAT HARM AND WILL DO MUCH WORSE IF THEY ARE ALLOWED TO CONTINUE WITHOUT MASSES OF PEOPLE ACTING TO DRIVE THEM FROM POWER.

The 2020 Refuse Fascism Statement of Conscience/Call to Act states,

“There are times in history when a people must reach deep into their collective conscience and act with extraordinary moral courage to stop the crimes of their government.

We must say out loud what has been too often spoken in whispers and riddles. An American fascism is here and advancing, wrapped in the flag and Mike Pence’s Bible taken literally—spreading its poison of white supremacy, misogyny, xenophobia, and oppressive, fundamentalist “traditional” values.

Participants in May 1 actions will available for interviews. Video will be posted at Facebook.com/RefuseFascism.
https://refusefascism.org/2020/04/29/may-1...
Add Your Comments
Support Independent Media
We are 100% volunteer and depend on your participation to sustain our efforts!