Oakland Police Department followed and targeted two unhoused outreach workers with The Village. Handcuffing and detaining them in the parking lot of East Oakland Collective. Guns drawn. Threatened to be tased. Police helicopter up. Yanna and Akil had just finished distributing water, food, and supplies to fellow unhoused residents; and were coming to meet with us. The police initially didn’t tell us why they were being pulled over and didn’t ask for ID. Eventually said it was for a lane change. It wasn’t until they pulled off with Akil in the squad car that they finally admitted the real reason- Akil matched the description of a suspect who committed a crime in the area. They racially profiled this brother who was simply out serving the people. So this is how OPD treats essential workers during COVID19 pandemic?!
Video:
https://www.instagram.com/p/B_aYASjheTE/

Oakland police officers reportedly didn't even know who they were pulling over in this case - the outreach volunteers are driving rental cars that were lent by a dealership to organizations doing work in the community.

7 squad cards rolled up and arrested two outreach volunteers in @EOakCollective’s parking lot this evening. They just came back from distributing food, water and supplies to the unhoused; and getting hotel rooms for emergency shelter. Disgusting!! https://twitter.com/situationist/status/1253912761513291776

PART 1: Police just rolled up and arrested two outreach volunteers in EOC’s parking lot. They just came back from distributing food, water and supplies to the unhoused; and getting hotel rooms for emergency shelter. This is how OPD treats it’s essential workers?! https://www.facebook.com/candice.elder/videos/10110673070323323/

Update from Facebook: "They are going to cite the brother out. He’s at Santa Rita and we are waiting for him to be released. I just got a apology call from the Deputy Chief."
Related Categories: East Bay | Health, Housing & Public Services | Police State & Prisons | Racial Justice
§Sunday Update
by The East Oakland Collective 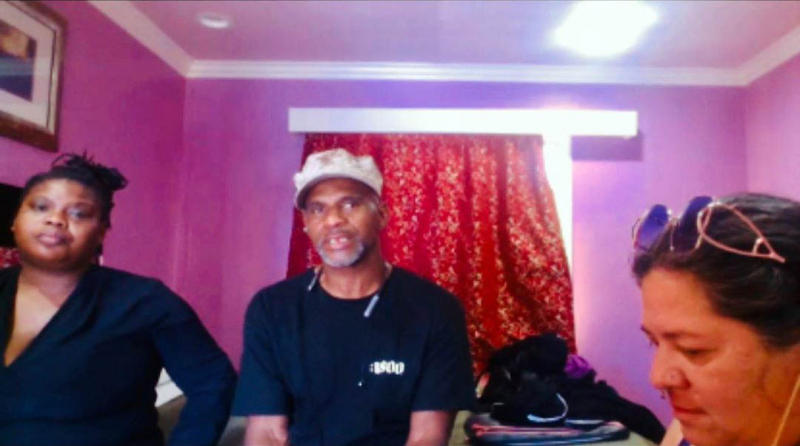 original image (1080x603)
Everyone’s been asking how Yanna and Akil, our friends and The Village outreach workers, who are unhoused in East Oakland, are doing after Friday’s incident where they were targeted, harassed and racially profiled by Oakland Police Department in our office parking lot on 78th and MacArthur. We got a chance to check in today. Ayanna and Akil are very traumatized and still processing what transpired. Stay tuned for next steps and how you can support.

Yanna’s statement to the community: "We are essential workers on the frontlines. We were serving our fellow unhoused oakland residents before covid19, during covid19 and we will be here after covid19. We want attention to be brought to how OPD and the government continues to terrorize Black and unhoused leaders. We tax payers too! At this time please support The Village and The East Oakland Collective in our efforts to immediately shelter in place our people in hotel rooms during the pandemic by contributing to our GoFundMe.”

https://linktr.ee/eastoaklandcollective
https://www.gofundme.com/f/emergency-shelter-for-unhoused-elders-in-oakland
END_OF_DOCUMENT_TOKEN_TO_BE_REPLACED
Add Your Comments
Support Independent Media
We are 100% volunteer and depend on your participation to sustain our efforts!