Add an Event
Newswire
Calendar
Features
Home
Donate
From the Open-Publishing Calendar
From the Open-Publishing Newswire
Indybay Feature
Related Categories: Central Valley | Environment & Forest Defense
As Oil Prices Plunge, Fracking and Oil Drilling Expands Under Gov. Newsom
by Dan Bacher
Monday Apr 20th, 2020 9:58 PM
“It just doesn’t make any sense to approve fracking permits in the state of California now,” said Liza Tucker, consumer advocate for Consumer Watchdog. “It’s clear that it’s time to sunset fossil fuels and effect a just transition to a new energy economy. We should end fracking right now and phase out oil and gas production in the state in a rational, managed way. We should not be issuing new permits for oil and gas drilling.” 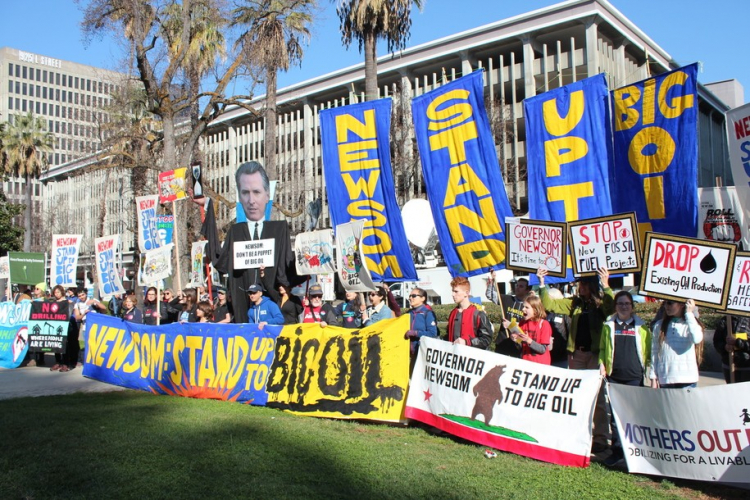 original image (915x610)
Despite the collapse in U.S. oil prices, the Gavin Newsom Administration continues to expand oil and gas drilling, including fracking, in California.

On April 20, US oil prices plunged, falling below $0 to $-37.63 a barrel, the lowest since NYMEX opened oil futures trading in 1983, according to Julia Horowitz, a reporter for CNN Business.

The market collapse is the result of the COVID-19 pandemic reducing demand and oil producers scrambling for locations to store their excess crude. Ironically, the collapse takes place at time when California regulators under Gavin Newsom have continued to approve new permits for fracking and other oil and gas drilling.

“The selloff can be attributed in part to market mechanics,” said Horowitz. “The May futures contract for West Texas Intermediate, the US benchmark, is about to expire. Most investors are already focusing on the June contract, thinning out trading volume and feeding volatility, UBS analyst Giovanni Staunovo said.”

“The June futures contract for WTI is trading around $22 per barrel, but that's still sharply lower on the day. Brent crude futures, the global benchmark, fell 8% Monday to $25.81 per barrel,” she continued.

The oil price plunge highlights how absurd it is for Governor Gavin Newsom’s regulators to continue Governor Jerry Brown’s expansion of oil and gas drilling as they have since Newsom took office in January 2019.

The State Department of Conservation on Friday, April 3 approved 24 new fracking permits in Kern County, the center of the oil industry in California, during the midst of the COVID-19 Pandemic and after a nearly six-month moratorium on new fracking operations.

The permits are the first to be issued in more than six months, following a moratorium that was placed on the practice announced by Governor Gavin Newsom last November that established a new third-party review by the Lawrence Livermore National Laboratory.

Environmental justice advocates, conservationists and public health advocates were very disappointed by the approval of environmentally destructive fracking operations as coronavirus infections, hospitalizations and deaths increase daily, although less than in other states due to Governor Gavin Newsom’s stay-at-home order and other emergency measures.

“It just doesn’t make any sense to approve fracking permits in the state of California now,” said Liza Tucker, consumer advocate for Consumer Watchdog. “It’s clear that it’s time to sunset fossil fuels and effect a just transition to a new energy economy. We should end fracking right now and phase out oil and gas production in the state in a rational, managed way. We should not be issuing new permits for oil and gas drilling.”

According to Bethany McClean in an opinion piece in the New York Times, the idea of “energy independence” in the U.S. — and California — has always been based on an illusion.

“That’s because oil fracking has never been financially viable. America’s energy independence was built on an industry that is the very definition of dependent — dependent on investors to keeping pouring billions upon billions in capital into money-losing companies to fund their drilling. Investors were willing to do this only as long as oil prices, which are not under America’s control, were high — and when they believed that one day, profits would materialize,” said McClean.

Last November’s moratorium on fracking came after the Last Chance Alliance, a coalition of over 700 health, environmental justice, climate and labor organizations, conduced a multi-year campaign calling on California’s Governor to protect the health and safety of communities living on the front lines of the state’s massive fossil fuel industry. The Alliance continues to urge Governor Newsom to address the public health impacts of California’s fossil fuel industry and lead toward a managed decline of oil production. The coalition stated:

“Now, more than ever, we need our elected officials to stand on the side of public health and safety. We celebrated the leadership that Governor Newsom showed last November when he placed a moratorium on fracking as part of a broader effort to strengthen health and safety protections for communities near oil extraction. We continue to applaud him as he bravely acts on the recommendations of scientists and public health professionals around the COVID-19 pandemic.

Yet, as Cal-GEM resumes permitting an extreme extraction technique that we know threatens our health, air and climate, we again call on the Governor to step in. It’s time for Governor Newsom to double down on his public health leadership. We call on the Governor and his administration to listen to the best available science and public health data that tells us that our best chance to protect frontline communities and avoid the worst impacts of the climate crisis is to phase out fossil fuel extraction. The state can’t claim to be a leader in protecting public health until it does so.”

The issuing of new fracking permits occurred less than two months after Consumer Watchdog and the FracTracker Alliance reported that the total number of oil and gas well permits issued in 2019 under the Newsom Administration rivals the number issued during the last year in office of former Governor Jerry Brown. The Newsom Administration issued just 1% fewer permits for a total of 4,545 in 2019 versus 4,590 for all of 2018, according to the groups.

Read the letter to Newsom here.

It is no surprise that the 4,545 permits were issued in a year when oil industry organizations again dominated lobbying spending in California.

When you add the $8.8 million from WSPA and the $5.9 million from Chevron, that comes to a total of $14.7 million spent of lobbying between the two oil industry giants alone

WSPA (http://www.wspa.org) describes itself as “a non-profit trade association that represents companies that account for the bulk of petroleum exploration, production, refining, transportation and marketing in the five western states of Arizona, California, Nevada, Oregon, and Washington.” WSPA’s headquarters is located in Sacramento, California. Additional WSPA locations include offices in Torrance, Concord, Ventura, Bakersfield, and Olympia, Washington.

For more information, read: https://www.dailykos.com/story/2020/4/4/1934357/-During-COVID-19-epidemic-California-regulators-approve-new-fracking-permits
Add Your Comments
Support Independent Media
We are 100% volunteer and depend on your participation to sustain our efforts!