Add an Event
Newswire
Calendar
Features
Home
Donate
From the Open-Publishing Calendar
From the Open-Publishing Newswire
Indybay Feature
Related Categories: Santa Cruz Indymedia | Health, Housing & Public Services
Demonstrators Demand Santa Cruz Provide Hotel Vouchers for the Homeless
by Alex Darocy (alex [at] alexdarocy.com)
Monday Apr 20th, 2020 4:04 PM
Community members in Santa Cruz organized a "physical distancing" protest today to demand the City and County of Santa Cruz provide hotel vouchers for the homeless during the COVID-19 Pandemic. The demonstration was organized following California Governor Gavin Newsom's statements made during a press conference on April 18 that cities and municipalities that are blocking the State's effort to provide hotels for the homeless will be "judged" by history. 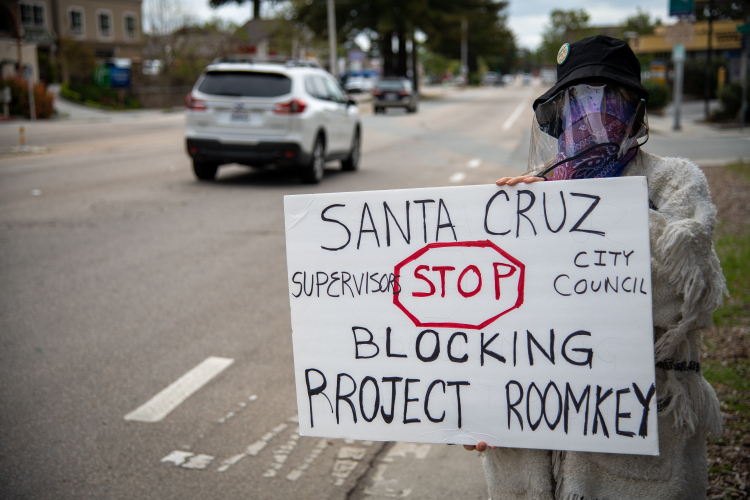 original image (3000x2000)
Newsom declined to name the specific cities that were not accepting funds, but he had strong words for them. “I just want to encourage those cities that are blocking efforts like this to consider themselves in the context of others…to consider their actions in the context and annals of history," Newsom said. “They’ll judge themselves, not just be judged by others, by the extent they help the least among us.”

Demonstrators in Santa Cruz, some with fixed housing and some without, spaced themselves out along Ocean Street at the "Welcome to Santa Cruz" sign. They held signs that read: "Newsom, Look at Santa Cruz," "Our City is is refusing to give motel rooms to the homeless," "Santa Cruz Supervisors, City Council, Stop Blocking Project Roomkey," "Motel Rooms Now to Stop Covid-19," "San Jose is Doing it," "Renters & Homeless Unite for Justice," "Everyone Needs Housing No Matter What," "Provide Motel Rooms Not Just for the Sick," "Where Did the Money Go?" "I Need A Safe Place, Where are the Motel Vouchers?" and "Where are Governor Newsom's Promised Buildings and Camps?"

Organizers of the demonstration included members of Santa Cruz Food Not Bombs, the Santa Cruz Chapter of the California Homeless Union, and Homeless United for Friendship and Freedom (HUFF).


All photos are Copyright 2020 by Alex Darocy, and are available for non-commercial use by permission.
http://alexdarocy.blogspot.com/
§
by Alex Darocy
Monday Apr 20th, 2020 4:04 PM 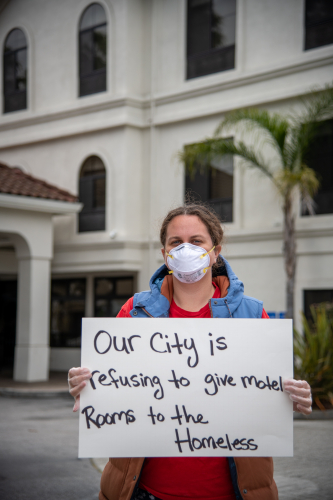 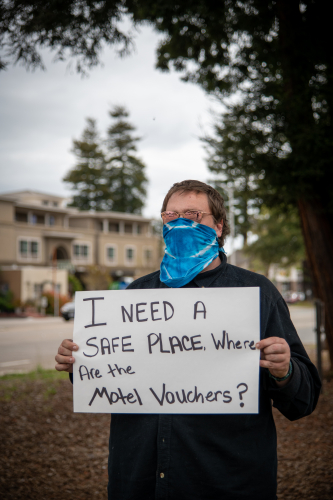 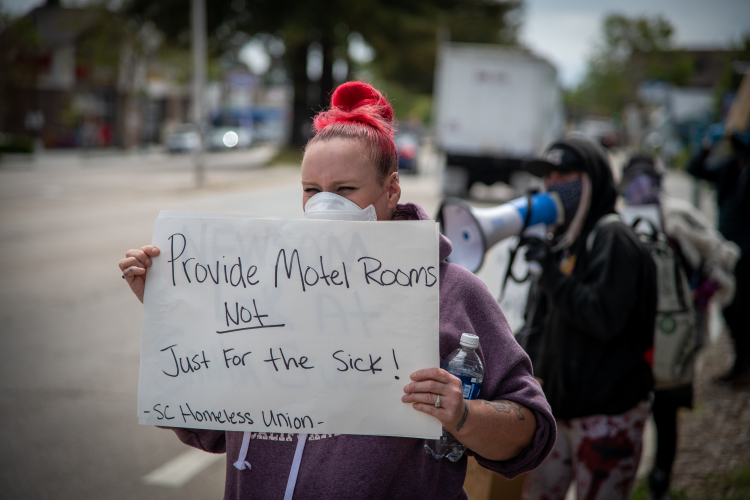 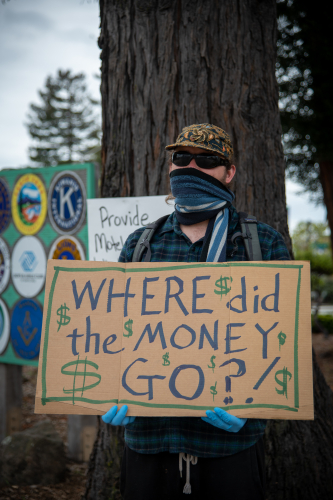 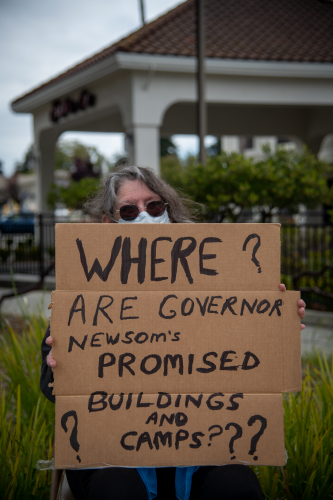 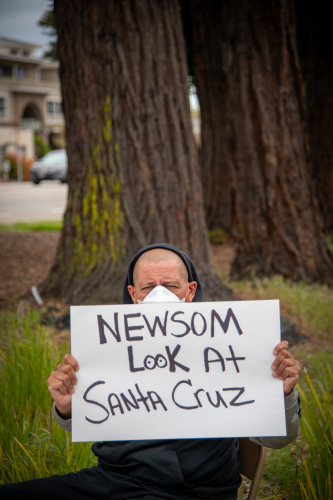 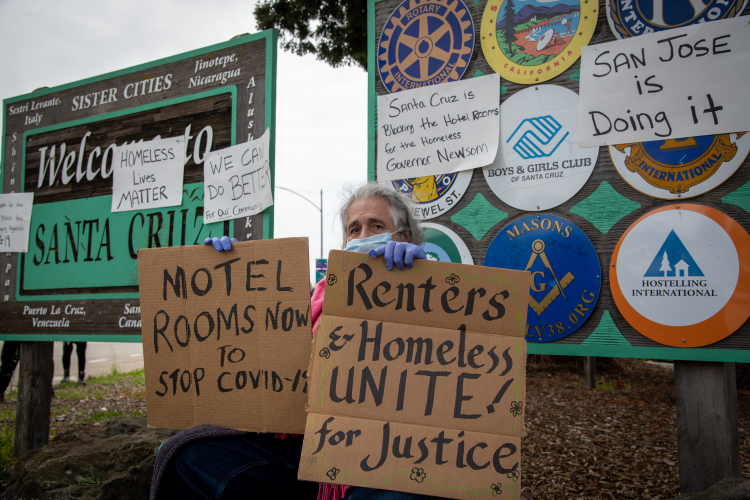 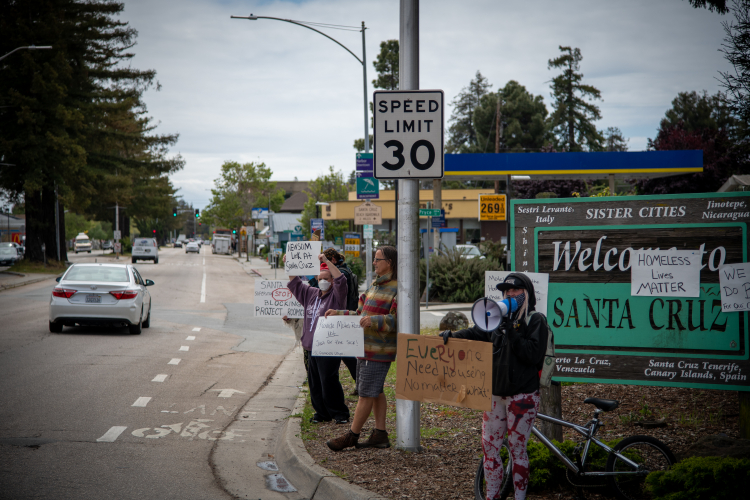 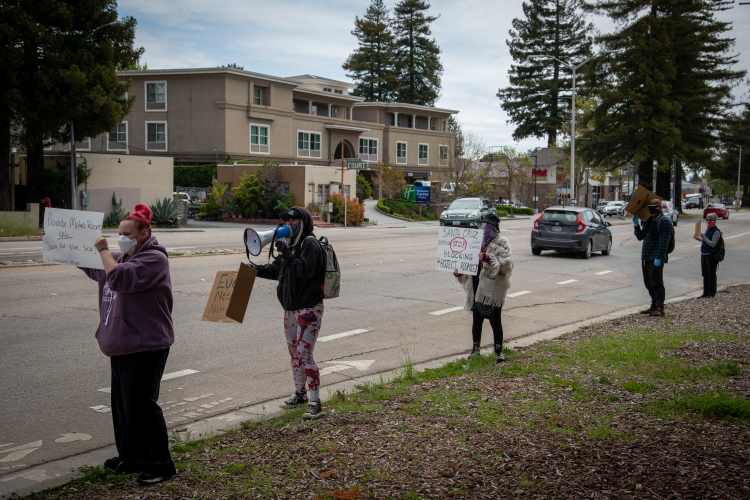 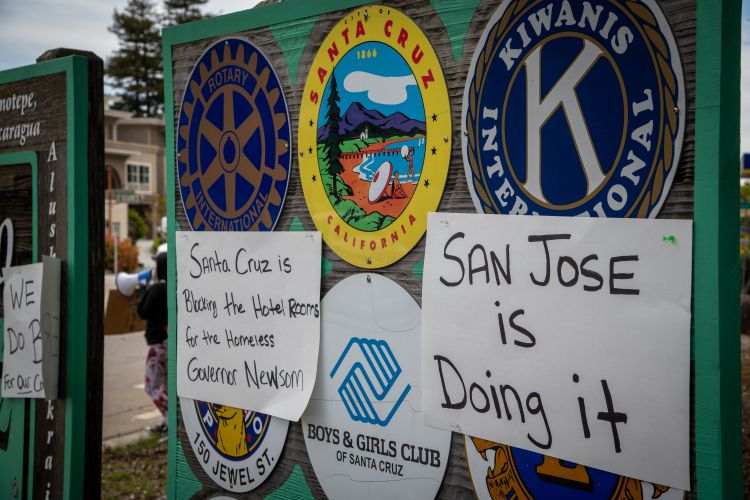 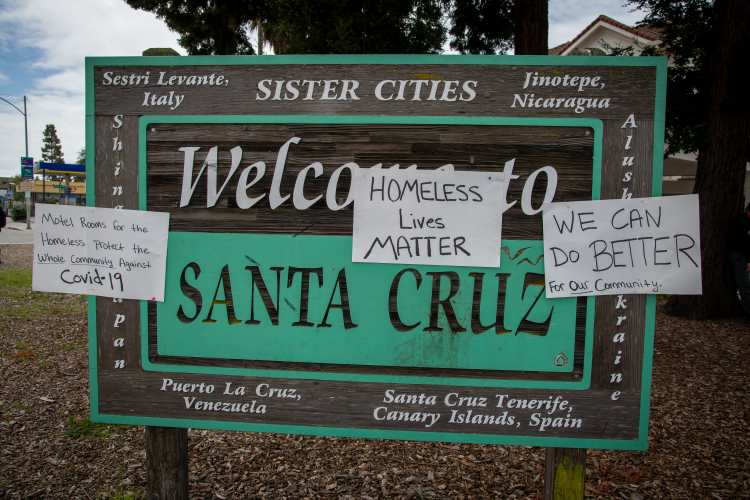 original image (3000x2000)
http://alexdarocy.blogspot.com/
Add Your Comments
LATEST COMMENTS ABOUT THIS ARTICLE
Listed below are the latest comments about this post.
These comments are submitted anonymously by website visitors.