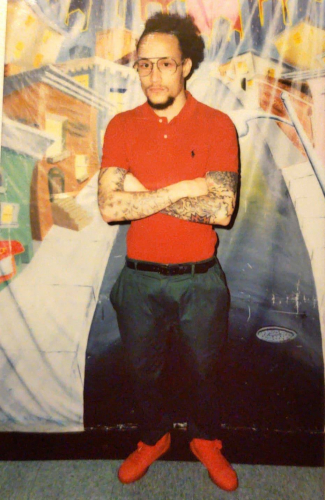 original image (931x1432)
The barbaric measures against Orta have gone on for years, but now with the onset of Covid-19 at his facility, the targeted abuse has intensified. The Corrections Officers at Midstate Correctional Facility have threatened to infect him with the deadly virus and said he will be lucky to get out of Midstate alive.

Since these threats, Orta has been placed in the infirmary, and is unwell, it is unclear yet whether he has contracted the virus and these threats against him have been realized.

In prior weeks, Orta was denied basic essentials such as cleaning supplies for his cell and soap. His family, friends and supporters are terrified. “Ramsey risked everything when he filmed the death of his friend Eric Garner at the hands of the NYPD and now six years later, his own life is at risk,” says Deja Richardson, his fiancé. “We just want him home.”

Before the outbreak, Orta had already been facing systematic abuse and torture by NYSDOCC. He had been transferred to 10 different facilities, many far north on the Canadian Border, far from his family and supporters. He had been put in solitary confinement on 7 separate occasions and spent over a year in isolation.

We must not forget this brave New York hero who helped to spark the #BlackLivesMatter movement across the United States when he chose to hit the record button to protect his friend.

If you would like to interview those closest to Ramsey Orta or for the latest update please contact:

Office of Special Investigations (OSI) – DOCCS
OSIComplaint [at] doccs.ny.gov
844 674 4697
https://www.facebook.com/SupportRamseyOrta/
Add Your Comments
Support Independent Media
We are 100% volunteer and depend on your participation to sustain our efforts!