Add an Event
Newswire
Calendar
Features
Home
Donate
From the Open-Publishing Calendar
From the Open-Publishing Newswire
Indybay Feature
Related Categories: South Bay | Labor & Workers
May Day: Honoring Frontline Workers in the Pandemic
by Sharat G. Lin
Saturday Apr 18th, 2020 10:38 PM
The COVID-19 pandemic makes abundantly clear that some of the lowest-paid workers are, in fact, the most essential frontline workers. Let's honor them on May Day - International Workers' Day! 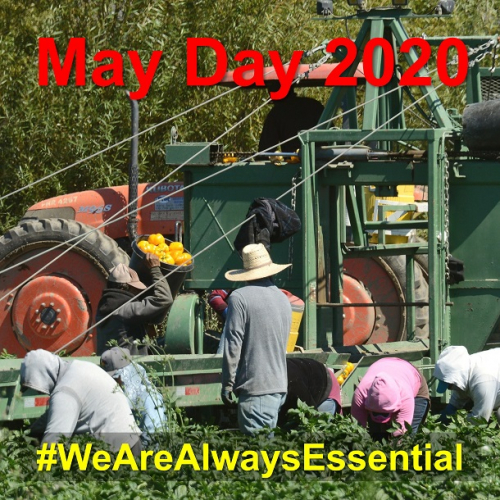 Paradoxically, these essential workers are among the lowest paid. Many, like farmworkers and gig workers, may not even have the statutory benefits accorded other workers – minimum wage, health care, paid sick leave, security of residence. Many are undocumented – farmworkers, personal caregivers, janitors. But just imagine a day without essential workers!

May Day – May 1, 2020 – is a day to honor these frontline workers and all workers who make our society run and who are the real creators of all wealth! May Day is celebrated in most countries around the world as International Workers’ Day.

May Day has not been generally recognized as a special day or a holiday in the United States because of conscious efforts by ruling elites to suppress labor activism. But on May 1, 2006, May Day was reborn in the U.S. out of fear that undocumented workers, most of whom are frontline workers, would be criminalized by a new bill (HR 4437) passed in the House of Representatives in December 2005. The nationwide protests, collectively one of the largest mobilizations in U.S. history, killed the bill in the Senate.

Ever since 2006, the May Day marches for workers’ rights and immigration reform have become a revived tradition in this country. Although May 1 was chosen because immigrant communities remember the celebrations of International Workers’ Day on this date in their countries of origin, May First is not new to the United States. International Workers’ Day on May 1 was, in fact, not only born in the United States, but born out of fear of police raids on immigrant workers.

In 1884 the Federation of Organized Trades and Labor Unions, predecessor of the American Federation of Labor (AFL), called for an eight-hour workday. When implementation appeared unlikely, a general strike was called in Chicago on May 1, 1886. On that day, some 80,000 workers marched down Chicago ’s Michigan Avenue in what is generally recognized as the first May Day parade. In the succeeding days, supporting strikes broke out in other cities, such as Milwaukee, Cincinnati, and New York City.

On May 3, four striking workers were killed by police at the McCormick Reaper Works in Chicago. At an evening rally on May 4 in Haymarket Square, called to protest the killings, police moved in to disperse the crowd when a bomb went off, killing seven policemen. Police retaliated by firing into the crowd of workers, killing and wounding an unknown number of civilians.

Determined to crush the labor agitations, police interrogations and arrests went on through the night and the ensuing days. Homes of workers, most of whom were immigrants from Europe, were raided in the middle of the night. Many innocent people were arrested without charges. A police reign of terror descended on the organized workers of Chicago.

Eight people were eventually charged and convicted for the deaths of the policemen, even though no evidence was ever presented directly linking them to the bombing in Haymarket Square. Four of the defendants were publicly hanged in 1887.

In Paris in 1889, the International Workingmen’s Association (Second International) called for worldwide demonstrations on May 1, 1890, commemorating the struggle of Chicago workers. The international tradition of May Day was born.

It took another three decades for workers to incrementally win the eight-hour workday through struggles with individual companies. Finally, the Adamson Act was passed by Congress in 1916, establishing a statutory eight-hour working day for railway workers with additional pay for overtime work.

May First, because of its deep roots in U.S. working class struggle, is richly symbolic of labor activism. Contrary to popular myth in the U.S., May First did not originate abroad or from countries in revolution, but rather from the very U.S. trade union movement that brought about the basic eight-hour working day that is today so much taken for granted.

In the desperation of the COVID-19 pandemic there is a flurry of activity around the world to make health care universally accessible, offer paid sick leave, provide financial relief for workers suddenly thrown out of work by lockdowns, release prisoners charged with nonviolent crimes, stop evictions, find shelter for the unhoused, and so on. But these actions should also be the standard priorities in normal times!

So on May 1, 2020 we will celebrate remotely with physical distancing and social solidarity the contributions of all workers, and especially the frontline workers of the world, for all times! 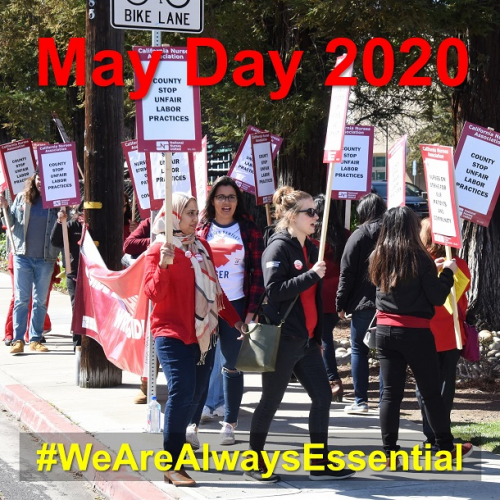 original image (610x610)
Honor all frontline workers on May Day!
#WeAreAlwaysEssential
Add Your Comments
LATEST COMMENTS ABOUT THIS ARTICLE
Listed below are the latest comments about this post.
These comments are submitted anonymously by website visitors.