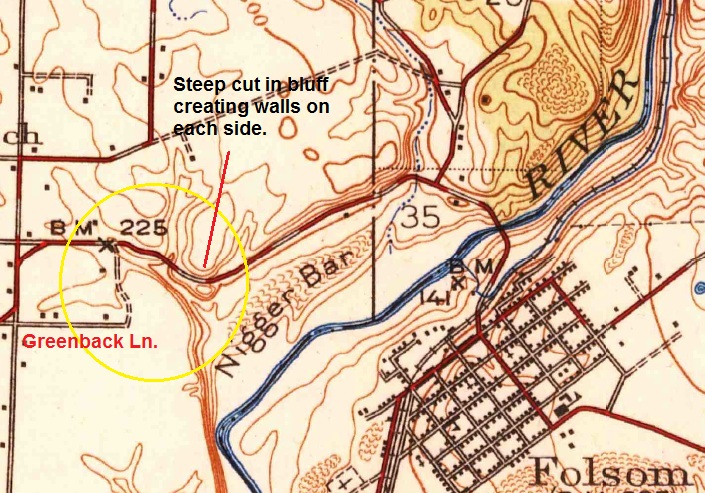 My father was a docent at the Folsom Historical Museum on Sutter Street, Folsom, Calif. from 1979 to 1997.

I noticed in an online article that you were the contributing source that claims the, now abandoned and submerged town of 'Nigger Bar' is under Folsom Lake.

In actuality it is under Lake Natoma, a few miles downstream.

The present day town of Folsom was partially within the geographical/political boundary of "Nigger Bar" and is in fact cited as being formerly known as 'Nigger Bar" in many historical accounts.

The Calif. State Park that is on the river banks opposite the present town of Folsoms' historical district and which was entirely within the political boundary of unincorporated Orangevale until most recently is know today as 'Negro Bar State Park' and has been since 1972, prior to that, i.e. from 1849-50 to 1972 the abandoned and mostly underwater ruins of the the original town site and the Calif.

State Park were known as 'Nigger Bar' and locals of the area that are for the most part 50 years of age and older still call it 'Nigger Bar'.

But, out of only a sense of matter of historical fact and for the fact it was nor had ever been called anything other than that.
Add Your Comments
LATEST COMMENTS ABOUT THIS ARTICLE
Listed below are the latest comments about this post.
These comments are submitted anonymously by website visitors.