Add an Event
Newswire
Calendar
Features
Home
Donate
From the Open-Publishing Calendar
From the Open-Publishing Newswire
Indybay Feature
Related Categories: East Bay | Health, Housing & Public Services
We’re Not Paying Rent: Here’s Why
by Oakland Rent Strike
Thursday Apr 2nd, 2020 10:37 PM
While there has long been a housing crisis in Oakland — and throughout California– COVID-19 makes the issue particularly dire because so many people are out of work and people are being told to stay at home to combat the spread of the virus. 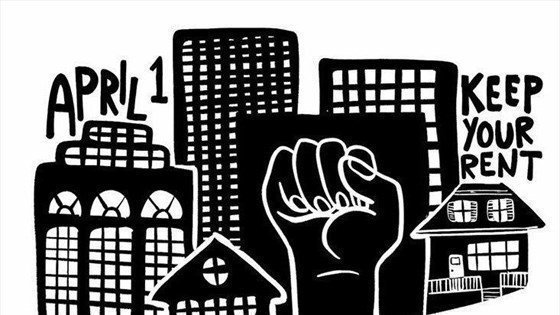 In California, by conservative estimates, there are over 150,000 people who are homeless, 1.3 million people who rent with incomes at or below the poverty line, three million people who pay more than 30-percent of their income on rent, and 1.5 million people who pay more than 50 percent. In the last ten years, average rents in California have doubled. Any unexpected emergency could quickly lead to people losing their homes, whether they become unable to afford a rent payment or a mortgage payment. There also are estimates of at least 108,000 people in California who are sleeping outdoors and another 43,000 in shelters, though some experts believe both of those figures are drastically underestimated.

And all of that was true before COVID-19 began devastating people’s lives. A record 3.3 million filed for unemployment so far this month as large parts of the economy in the United States and throughout California are shut down. And the unemployment numbers are only going to rise. The “jobless claims confirm that the United States is in the thralls of a catastrophic unemployment crisis, the likes of which we haven’t seen since the Great Depression,” said Andrew Stettner, senior fellow at the Century Foundation think tank. “This represents the single worst one-day piece of labor market news in America’s history.”

COVID-19 has turned a crisis into an emergency.

While there has long been a housing crisis in Oakland — and throughout California– COVID-19 makes the issue particularly dire because so many people are out of work and people are being told to stay at home to combat the spread of the virus. What happens when people unable to pay rent who are being told to stay at home find themselves also facing eviction?

“In a time of pandemic and massive economic crisis, when we are being asked to stay home, having a home to stay in must be a right, not an expensive privilege.”

Further, people are being asked to skip work—and skip paychecks or expected tips if in the service industry—either for their own health protection or the protection of the entire community. Tenant advocates say, “[R]enters can’t quarantine, or take other measures to avoid spreading coronavirus, if they’re forced from the homes officials want them to stay in.”

For example, even with the expected $1,200 from the federal stimulus bill, a person in California unable to work would likely still fall far short of being able to pay rent with that amount of money—and that assumes the person would have no other expenses which is of course untrue. The average rent for an apartment in Oakland is $2,935.

A person who before COVID-19 did not have any room to spare in terms of income versus expenses, who suddenly has added medical bills or other emergency expenses, likely will not be able to also afford rent or a mortgage. At a minimum, COVID-19 will force people to choose between paying for a home, food, or medication.

Earlier this month, Governor Newsom put forward an executive order that put the entire responsibility for COVID-19 and housing on cities and counties “authoriz[ing] local governments to halt evictions for renters and homeowners, slow foreclosures, and protect against utility shutoffs for Californians affected by COVID-19.” In response, Leah Simon-Weisberg, legal director with the Alliance of Californians for Community Empowerment, said, “Really disappointing. Total lack of leadership.”

On March 27, the Governor issued a new executive order, ordering a “statewide moratorium on evictions.” This order:

While the order moves a procedural deadline in eviction court cases, it does not legally extend the time for any tenant to pay rent or protect a tenant from being evicted if they do not pay within their normal time frame. Thus, tenants who are unable to pay rent are not any more likely to retain their housing than they were before. They are also still liable for the full amount of rent.

Though the second order is a slight improvement over the governor’s initial order, it still fails to provide almost any protection to thousands of Californians at this time of crisis. It also runs the risk of confusing people as to what happens if they cannot afford to pay rent. Jackie Zaneri, an attorney with the nonprofit Centro Legal de la Raza said the governor’s order is “going to mislead people. People are going to think they are protected when they are not.”

(1) The order is not a moratorium on evictions.

It is only an extension of time for tenants to respond to eviction lawsuits if they knew about the order and complied with the burdensome requirements. It does not extend the time for a tenant to pay or make the tenant more likely to win their case. It places a burden on people to document in writing, and maintain, the reasons why the person could not pay rent, and specifically tie the reasoning to COVID-19. At a time of crisis, there is no justification for adding this burden to people who are already struggling with so many issues. The governor should order a moratorium on all evictions and not require people to also be able to prove the reason in writing– everyone knows that COVID-19 either directly or indirectly played a part in a person’s inability to pay rent. Further, there may be people who cannot pay rent for reasons that began before COVID-19. However, when people are being told to stay home, it is nonsensical that the state would evict that person at this moment.

(2) The duration of the order is insufficient.

The governor should not place a time limit on the order.  Instead, it should be a standing order without a specified end or, at minimum, an order that stands until the emergency is over. People should not have to worry about paying rent or a mortgage as long as we remain in a crisis. Ensuring housing for the entire duration of the COVID-19 emergency could decide  whether a person survives this crisis or not. The following states have issued moratoriums on evictions either until the end of the crisis or with no specific end date: Indiana, Kentucky, Louisiana, Mayland, Massachusetts, New Hampshire, South Carolina, Tennessee, and Washington, D.C.

A temporary statewide delay on evictions is a sign that Governor Newsom heard the outrage from tenants across the state when he ignored them completely earlier. However, temporarily delaying some eviction cases does not eliminate the problems people are going to face during this crisis. The order specifies that people — many of whom will have lost their jobs — (1) will still have to pay for any missed payments and (2) can still face eviction procedures. In effect, the order does not solve a problem but pushes it down the road. This is why the governor should issue an order suspending all payments, with no penalty or requirement to later cover the missed payments.

A person who cannot pay rent now is unlikely to be able to come up with multiple months rent at a later date. Or knowing that eviction remains a possibility and that April, 2020 rent will still have to be paid for, a person might choose to pay monthly rent but instead forego other necessities such as food and medical bills. The governor should implement measures to ease people’s burdens, not simply shift them around. As Michael McKee, executive director of Tenant PAC, said, “We do not want to come out of this crisis having had extremely low-income people just build up debt that they can’t pay off in the form of back rent.” The solution should be the complete suspension of rent and mortgage payments and forgiveness of the debt. This has currently been proposed in New York, which would allow for a suspension and forgiveness of rent payments for residential and small business commercial tenants, as well as a suspension and forgiveness for mortgage payments.

We do not want to come out of this crisis having had extremely low-income people just build up debt that they can’t pay off in the form of back rent.

The primary goal must be protecting people first. State and federal governments can help businesses and landlords recover if need be, but government mandates now should not come at the expense of people who will lose their homes or fall deep into debt, both now and when the crisis is over.

Finally, what we want to make clear is that we are not interested in returning to the pre-COVID-19 state of affairs. We must have housing for all who are without homes. Human needs must take priority over corporate greed. The displacement of our community must end. We will stand together today and we will stand together tomorrow until all of us are housed in safety and dignity. 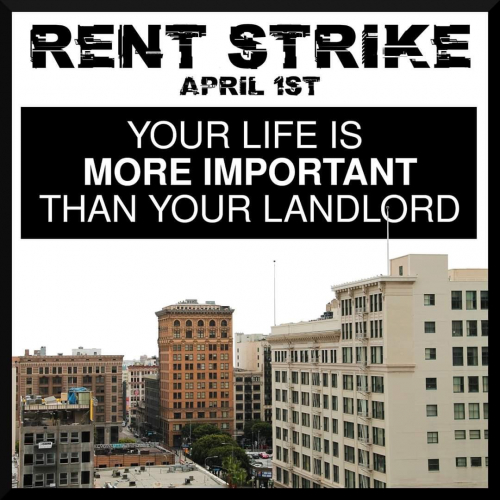 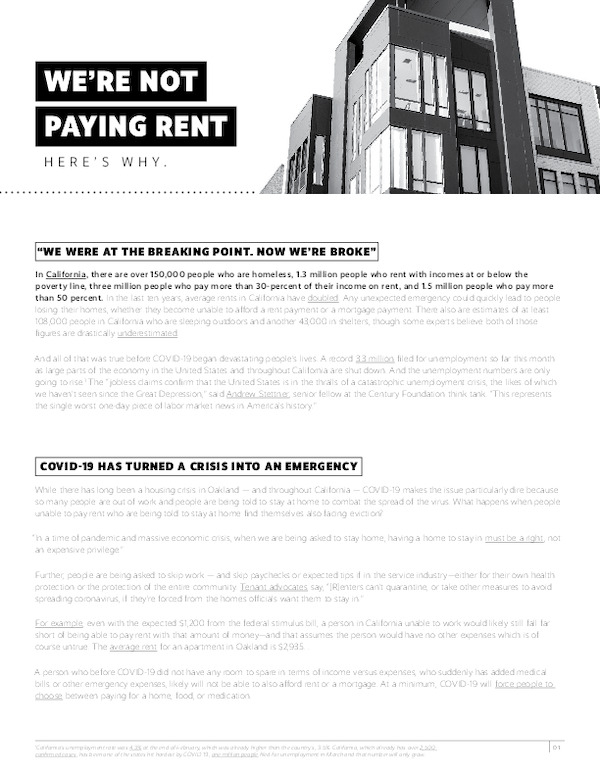 Download PDF (354.7KB)
https://rent-strikes.com/
Add Your Comments
Support Independent Media
We are 100% volunteer and depend on your participation to sustain our efforts!