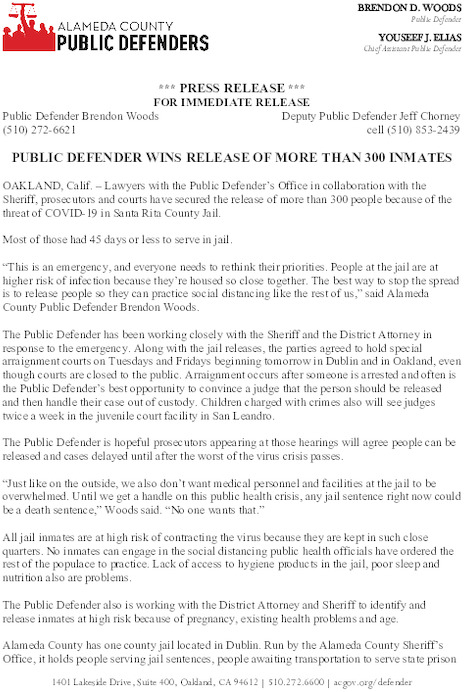 Download PDF (150.8KB)
Most of those released from Santa Rita had 45 days or less to serve in jail.

“This is an emergency, and everyone needs to rethink their priorities. People at the jail are at higher risk of infection because they’re housed so close together. The best way to stop the spread is to release people so they can practice social distancing like the rest of us,” said Alameda County Public Defender Brendon Woods.

The Public Defender has been working closely with the Sheriff and the District Attorney in response to the emergency. Along with the jail releases, the parties agreed to hold special arraignment courts on Tuesdays and Fridays beginning tomorrow in Dublin and in Oakland, even though courts are closed to the public. Arraignment occurs after someone is arrested and often is the Public Defender’s best opportunity to convince a judge that the person should be released and then handle their case out of custody. Children charged with crimes also will see judges twice a week in the juvenile court facility in San Leandro.

The Public Defender is hopeful prosecutors appearing at those hearings will agree people can be released and cases delayed until after the worst of the virus crisis passes.

“Just like on the outside, we also don’t want medical personnel and facilities at the jail to be overwhelmed. Until we get a handle on this public health crisis, any jail sentence right now could be a death sentence,” Woods said. “No one wants that.”

All jail inmates are at high risk of contracting the virus because they are kept in such close quarters. No inmates can engage in the social distancing public health officials have ordered the rest of the populace to practice. Lack of access to hygiene products in the jail, poor sleep and nutrition also are problems.

The Public Defender also is working with the District Attorney and Sheriff to identify and release inmates at high risk because of pregnancy, existing health problems and age.

Alameda County has one county jail located in Dublin. Run by the Alameda County Sheriff’s Office, it holds people serving jail sentences, people awaiting transportation to serve state prison
2 sentences, as well as people who have been accused of committing crimes and are awaiting trial or other hearings but cannot post bail. There also are people accused of violating conditions of probation or parole.
http://www.co.alameda.ca.us/defender/news/
Add Your Comments
Support Independent Media
We are 100% volunteer and depend on your participation to sustain our efforts!