Add an Event
Newswire
Calendar
Features
Home
Donate
From the Open-Publishing Calendar
From the Open-Publishing Newswire
Indybay Feature
Related Categories: Santa Cruz Indymedia | Health, Housing & Public Services | Police State & Prisons
Santa Cruz Police Prohibit Food Distribution to Homeless at Town Clock
by Santa Cruz News
Tuesday Mar 24th, 2020 3:29 PM
Santa Cruz Chief of Police Andrew Mills has addressed a cease and desist letter to Keith McHenry, the co-founder of Food Not Bombs, demanding McHenry, "cease feeding people at the clock tower immediately." Additionally, Police have issued a public notice to vacate the area of the Town Clock, which states that all personal belongings must be removed from the park by March 25 at 9 am. Since the Coronavirus/COVID-19 shelter in place order issued by the County took effect on March 17, Santa Cruz Food Not Bombs and the Santa Cruz Chapter of the Homeless Union have been sharing food in downtown Santa Cruz around the clock. On March 20, police evicted residents from the homeless encampment located next to the post office, which is across the street from the Town Clock, and attempted to prohibit advocates from sharing food in the area. On March 23, Food Not Bombs and the Santa Cruz Homeless Union distributed 81 motel vouchers to unsheltered individuals, which brought a large group of people in search of shelter to the location. (Photo: Cease and decist letter.) 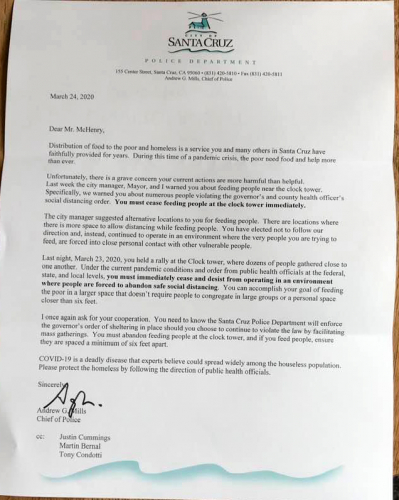 original image (636x796)
On March 20, police began fencing off areas adjacent to the Town Clock to prevent unsheltered individuals from congregating, and it is expected that police will fence off the Town Clock on March 25 as well. 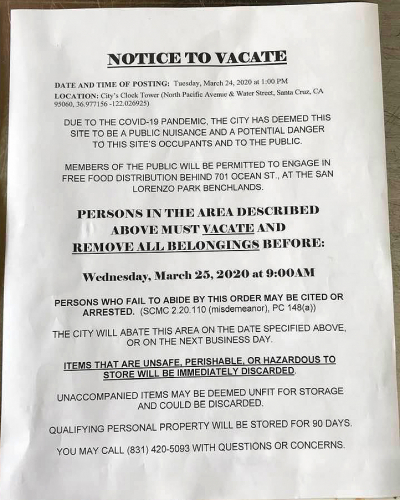 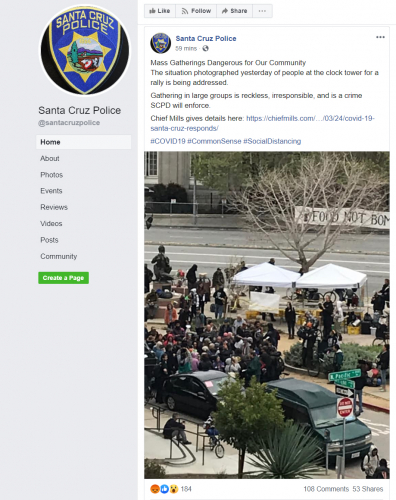 original image (919x1159)
As a justification for the notice to vacate, police post a photo to Facebook of Santa Cruz Food Not Bombs and the Santa Cruz Homeless Union distributing motel vouchers to unsheltered individuals on March 23.
§UPDATE: A Volunteer was Cited for Placing Social Distancing Markers
by Santa Cruz News
Tuesday Mar 24th, 2020 3:47 PM 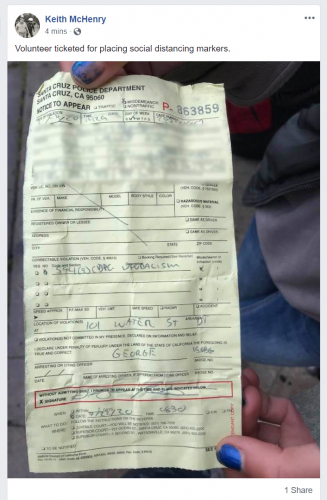 original image (706x1078)
Posted a few minutes ago to Facebook by Keith McHenry of Food Not Bombs.
Add Your Comments
LATEST COMMENTS ABOUT THIS ARTICLE
Listed below are the latest comments about this post.
These comments are submitted anonymously by website visitors.