Add an Event
Newswire
Calendar
Features
Home
Donate
From the Open-Publishing Calendar
From the Open-Publishing Newswire
Indybay Feature
Related Categories: Santa Cruz Indymedia | Health, Housing & Public Services
Real Estate Interests Seek Limits on Proposed Eviction Moratorium in Santa Cruz
by Santa Cruz News Network
Monday Mar 23rd, 2020 11:26 PM
Santa Cruz Together is calling for a 90-day "repayment period" to be written into the proposed emergency eviction moratorium ordinance on the agenda of tomorrow's Santa Cruz City Council meeting. The ordinance seeks to, "protect the health, safety, and welfare of the larger community by preventing residential or commercial evictions for non-payment of rent as a result of economic losses related to the coronavirus pandemic to avoid further homelessness and loss of jobs and employment opportunities within the community," according to the meeting's agenda packet. Santa Cruz Together fought rent control and other renter protections in the City of Santa Cruz in 2018, in addition to funding the campaign to recall Progressive City Councilmembers Chirs Krohn and Drew Glover with Santa Cruz United, in 2019 and 2020. A letter-writing campaign initiated by Santa Cruz Together, calling on the City Council to place limits on the proposed eviction moratorium, was joined by at least one Santa Cruz United steering committee member, as well as many of the large donors to the recall campaign who have various financial interests in the real estate industry. The proposed eviction moratorium ordinance will be acted on sometime after 2pm during the Santa Cruz City Council meeting on Tuesday, March 24. [Photo: Letter to Santa Cruz City Council from Lynn Renshaw on behalf of Santa Cruz Together.] 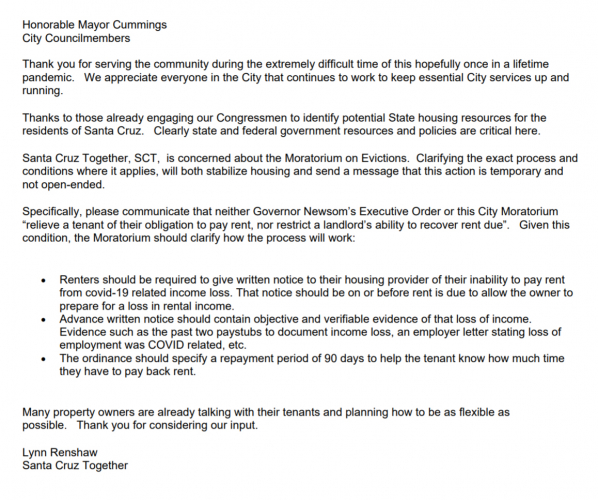 original image (1158x967)
Public correspondence from a large number of individuals with financial interests in the real estate industry mirror the letter sent to the City Council by Lynn Renshaw on behalf of Santa Cruz Together, which reads as follows:

Thank you for serving the community during the extremely difficult time of this hopefully once in a lifetime pandemic. We appreciate everyone in the City that continues to work to keep essential City services up and running.

Thanks to those already engaging our Congressmen to identify potential State housing resources for the residents of Santa Cruz. Clearly state and federal government resources and policies are critical here.

Santa Cruz Together, SCT, is concerned about the Moratorium on Evictions. Clarifying the exact process and conditions where it applies, will both stabilize housing and send a message that this action is temporary and not open-ended.

Specifically, please communicate that neither Governor Newsom’s Executive Order or this City Moratorium “relieve a tenant of their obligation to pay rent, nor restrict a landlord’s ability to recover rent due”. Given this condition, the Moratorium should clarify how the process will work:

* Renters should be required to give written notice to their housing provider of their inability to pay rent from covid-19 related income loss. That notice should be on or before rent is due to allow the owner to prepare for a loss in rental income.
* Advance written notice should contain objective and verifiable evidence of that loss of income. Evidence such as the past two paystubs to document income loss, an employer letter stating loss of employment was COVID related, etc.
* The ordinance should specify a repayment period of 90 days to help the tenant know how much time they have to pay back rent. Many property owners are already talking with their tenants and planning how to be as flexible as possible.

Thank you for considering our input.
Lynn Renshaw
Santa Cruz Together


A letter writing campaign organized to strengthen and support the emergency eviction moratorium has also been initiated. The template letter reads as follows:

The Coronavirus pandemic has arrived in California. With already over 300 confirmed cases in the state, fifteen cases here at home in Santa Cruz County, our local governments have a moral obligation to treat this public health crisis seriously and with urgency. We also know that working families in Santa Cruz, one of the top 5 least affordable cities in the US, are one paycheck away from homelessness.

With a temporary ban on evictions, we can protect our community from both a housing crisis, by protecting ill workers from homelessness, and a public health crisis, by isolating them and mitigating the spread of a highly-contagious virus.

The city and county of Santa Cruz have both introduced emergency ordinances to enact temporary bans on evictions, but they don't go far enough.

In addition to a ban on evictions, there needs to be a stated grace period for repayment of rents so that people can get back on their feet without a hefty fee after the lockdown is lifted. The ordinance must forbid no-cause evictions as well, not just for non-rent payment. Without such protections, a landlord could theoretically refuse to re-up a lease.

We also ask our local governments to stop conducting sweeps of encampments of people experiencing homelessness, and to increase the number of hand washing stations and port-a-potties. The Centers for Disease Control agrees these are crucial steps that must be taken to slow the spread of this virus that is especially dangerous to our vulnerable unhoused population.


The support letter can be signed here:
https://actionnetwork.org/letters/emergency-covid-19-ordinances-proposed-for-santa-cruz-dont-go-far-enough) 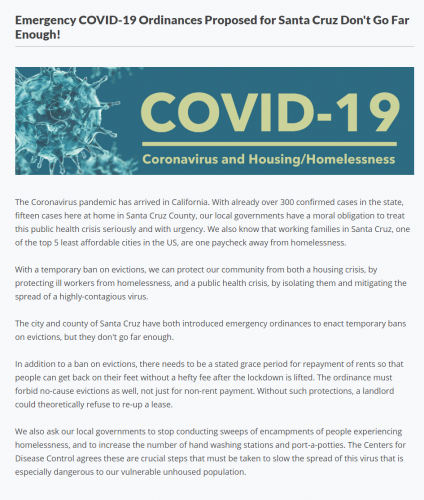 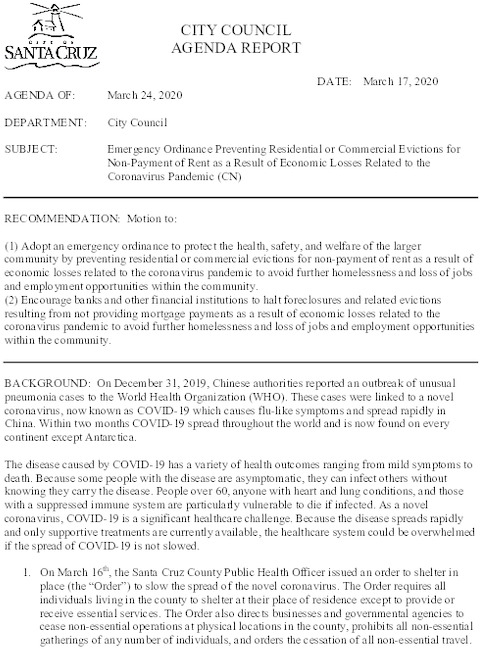 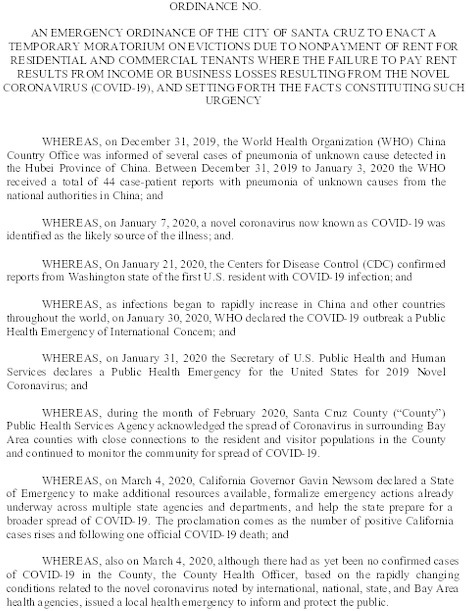 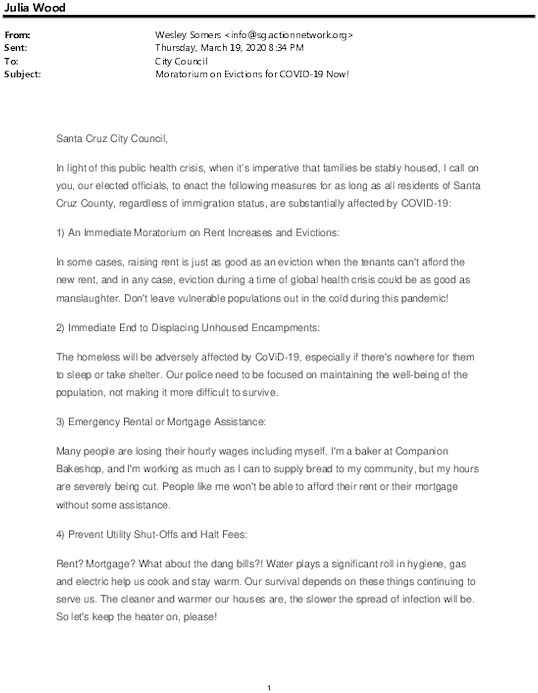 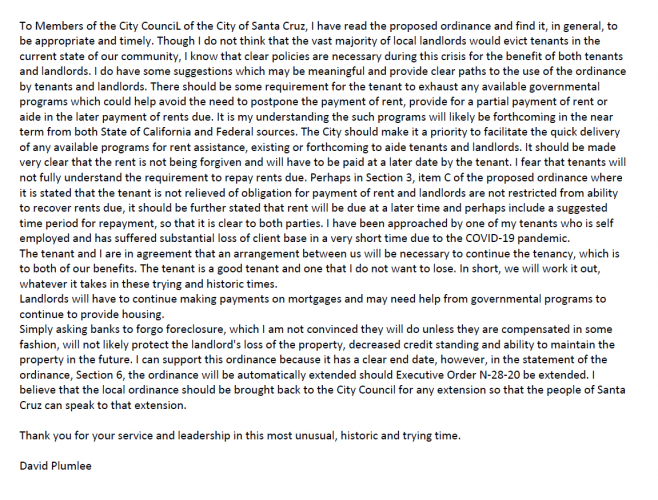 In an effort mitigate the spread of COVID-19, there will be no public access at Chambers or the Tony Hill Room. To submit comments, members of the public can email cityclerk [at] cityofsantacruz.com and must include the agenda item they are emailing about in the subject line.

You can view the meeting from home on the City of Santa Cruz’s Website at http://www.cityofsantacruz.com/government/city-council/council-meetings, on http://communitytv.org/watch/government-demand/, or on channel 25.

(The proposed emergency eviction moratorium ordinance is agenda item #15: http://scsire.cityofsantacruz.com/sirepub/mtgviewer.aspx?meetid=1360&doctype=AGENDA)
Add Your Comments
Support Independent Media
We are 100% volunteer and depend on your participation to sustain our efforts!