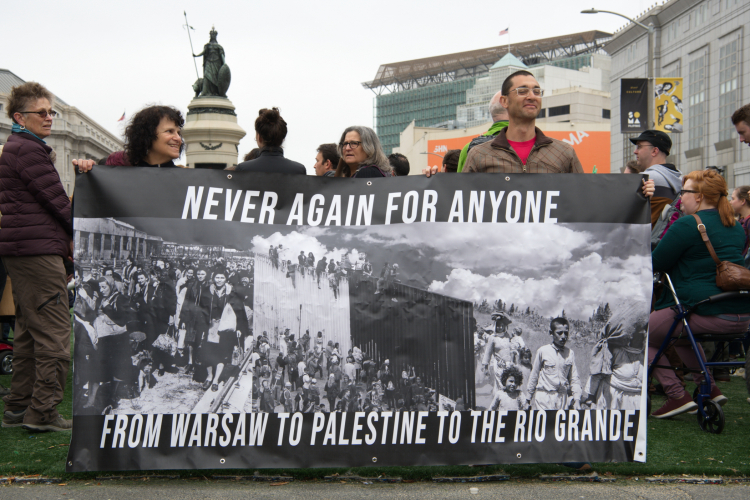 “The detention centers in our state are going to become death camps for the immigrants locked inside, unless Governor Newsom uses his emergency powers and influence to release them immediately,” says Never Again Action. The group co-signed a letter with Immigrant Defense Advocates, ACLU of Southern California, San Francisco Marin Medical Society, and nearly 150 other organizations demanding that the governor call for the release of all migrants in detention; halt the state’s expansion of migrant detention facilities; and suspend the transfer of migrants from California custody to ICE.

The letter states that “the threat of a COVID-19 outbreak in immigration detention facilities is dire and imminent,” pointing out that many migrants have died of preventable and treatable illnesses in ICE custody before the outbreak of a pandemic. And it argues Governor Newsom has the authority and the responsibility to protect all Californians during this unprecedented crisis by halting ICE raids and detentions and releasing detained migrants back to their communities and families so that they may shelter in place, as the governor himself has ordered. There are around 52,000 people in detention camps around the country, many of them in California.

Never Again Action expects to escalate its efforts if the governor does not respond to the letter.

Never Again Action released the following statement when the group formed in June 2019:

“As Jews, our history has taught us what happens when people do nothing; we are heeding the message of our ancestors when we say #NeverAgainIsNow.” In this time of global health crisis, the group adds: “Anne Frank did not die in a gas chamber. She died of a treatable communicable disease, contracted in the crowded, dirty conditions of a detention center.” Never Again Action is a mass mobilization of Jews who are organizing to shut down ICE and hold the political establishment accountable for enabling both the deportation machine that has separated immigrant families across the U.S. for decades and the current crisis at the border.

We come together as a group of differently affiliated Jewish organizers, recognizing that we have seen this groundwork laid before. We understand it to be our community’s obligation to stand up when we see history repeat itself and to declare that Never Again means Never Again for anybody.
https://www.neveragainaction.com/
Add Your Comments
LATEST COMMENTS ABOUT THIS ARTICLE
Listed below are the latest comments about this post.
These comments are submitted anonymously by website visitors.