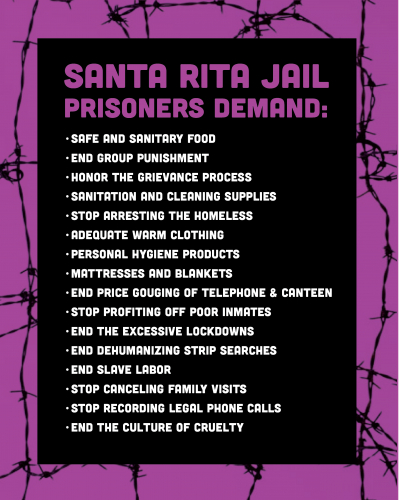 From late October to November 2019, a week-long work stoppage and hunger strike mobilized over 400 people inside Santa Rita jail to refuse meals, commissary, and work assignments. Prisoners delivered a comprehensive statement regarding their conditions; as well as a list of demands, which included regular access to cleaning supplies, regular meal times, more nutritious food, lower commissary prices, and more time out of their cells. This remarkable display of political unity and discipline was met with retaliation by the jail, which attempted to suppress the peaceful protest through lockdowns, raids, and inmate transfers between housing units within the jail and to other institutions in the Bay Area.

Four months later, prisoners inside Santa Rita are still suffering from abuse, neglect and abysmal conditions. The jail is simultaneously subjecting inmates to greater scrutiny while it remains highly disorganized in the aftermath of the work stoppage – which disrupted the jail’s ability to exploit inmate’s unpaid labor for the benefit of its food vendor, Aramark Correctional Services.

Additionally, as businesses, schools, and institutions close to reduce the transmission of COVID-19, many people are wondering how to support people in jails, prisons, and immigration detention centers. We have also received inquiries from journalists and investigators about the coronavirus, how inmates in Santa Rita have fared, and whether they are able to maintain adequate hygiene to prevent the spread of disease.

First and foremost, we want to emphasize that conditions inside Santa Rita (as in all jails and prisons), have ALWAYS BEEN A PUBLIC HEALTH CRISIS, as prisoners have continually emphasized in their communiqués. Institutions such as Santa Rita have never provided access to the proper cleaning and sanitation supplies, nor anywhere near adequate medical care. These deprivations were a key issue of the 2019 workers’ strike and remain a vital concern of prisoners who continue to organize for basic improvements in living conditions. As we have already witnessed in 2020, prisoners inside Santa Rita were not spared during this year’s flu season, and many people became extremely ill.

Prisoners want the public to know that they continue to organize for the improvement of their basic living conditions. They have drafted a detailed grievance describing the ongoing abuses they experience, which has been circulated throughout the jail for inmates to add their signatures in support of the statement. This collectively-written document, a response to the jail’s blatant disregard of the inmate grievance process, is the product of months of careful organizing. Santa Rita deputies have attempted to prevent its circulation by raiding prisoners’ rooms and confiscating signatures. Delivered with the signatures on Monday, March 16 to Santa Rita Jail staff and the Alameda County Board of Supervisors, this grievance represents a major risk for prisoners who face retaliation and group punishment for exposing the conditions they face.

The introduction of the collective grievance states:

We are all inmates under the custody of the Alameda County Sheriff’s Office: Santa Rita Jail. Our ultimate goal is to improve the overall conditions unto which all inmates of this institution are subject. We therefore, as inmates, affirm our consensus that the issues we list in this grievance, are common to all of us, and are the most significant issues we all endure. We are filing a group grievance because of the difficulty with filing grievances within Santa Rita Jail.

These practices make filing grievances so difficult, in order to raise our voices and bring attention to the awful, difficult to endure conditions at Santa Rita Jail, we have no choice but to file a group grievance about the daily, long standing, unconstitutional and inhumane conditions of confinement we are subjected to. Santa Rita needs to evolve its systems and methods away from this punitive and demoralizing jail system with inhumane treatment of citizens and drug addicts to a modernized system and methods of restorative justice! The jail needs to end its culture of cruelty. The current system does not make our communities any safer! To the contrary, it makes them less secure! Inmates leaving the jail are not better for having been in jail. We need to build people up, make them productive and restore their health and vitality.

For all of the latest information on what’s happening in Santa Rita as well as the text of the collective grievances please download, read, and share the inaugural issue of the Santa Rita Jail Bulletin attached below 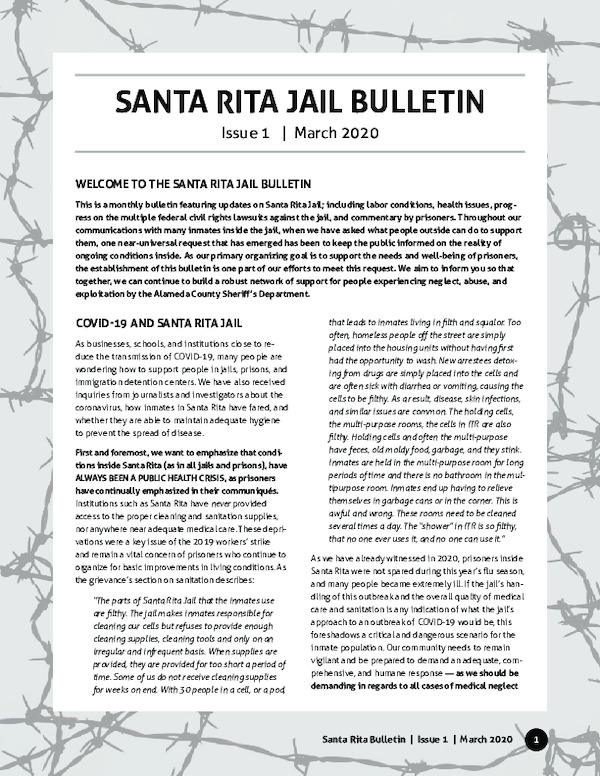 Download PDF (341.7KB)
https://iwocoakland.wordpress.com/2020/03/...
Add Your Comments
Support Independent Media
We are 100% volunteer and depend on your participation to sustain our efforts!