Add an Event
Newswire
Calendar
Features
Home
Donate
From the Open-Publishing Calendar
From the Open-Publishing Newswire
Indybay Feature
Related Categories: California | East Bay | Santa Cruz Indymedia | Education & Student Activism | Labor & Workers
COLA & Corona
by Spread The Strike!
Wednesday Mar 11th, 2020 11:11 PM
UCSC, like other campuses, has gone online-only to mitigate coronavirus. Rather than maintaining a physical picket, we focus our efforts on the digital picket. Our organizing will only get stronger and more creative! 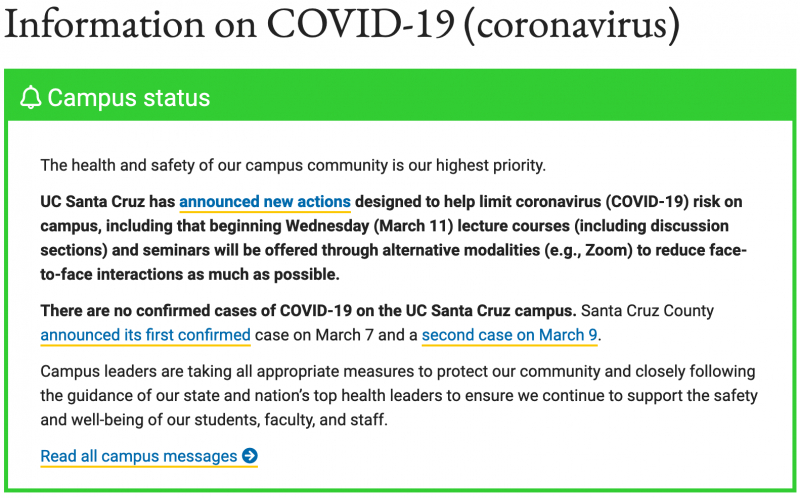 As you know, UCSC has just followed Berkeley in moving all of its classes online, starting tomorrow. I believe that this development of events fundamentally alters the strategic situation.

One problem that people sometimes have is that they get in the habit of thinking that the recent past is a good guide to the near future. Perhaps some of this is due to hardwired epistemic biases of the human creature, but much of it is social: we are under immense pressure to make investments of our time, money, and passion into the world under the assumption that things are more or less going to continue the way have been recently. This leave us vulnerable, both as individuals and as a society, to systemic risk.

What I would like to suggest to you is that the University system as we know it does not have the inertia of history on its side, despite whatever appearance our adversaries in the institution might wish to hold out to us. It is a very fragile institution, and it's an institution which has not existed very long, and therefore does not have the sheer historical momentum which we might be fooled into imagining that it does. The American University system was really created, in the form that we are familiar with it, in the wake of WW2. It went through an expansionary phase that lasted until, roughly speaking, the 80s, when the aftermath of the world monetary crisis of the 1970s, the Reagan revolution, and the end of the Cold War pushed the structure of US political economy -- and the University along with it -- into a new phase of what we could call "financialized contraction." That process has been going on up until the present moment. I think it brings some important perspective to realize that the second, contractionary era has lasted almost as long as the golden era of expansion that we remember, sort of foggily, as "how the university should be working if it weren't in crisis."

One salient feature of the contractionary phase, for our purposes, is the structural overproduction of PhDs alongside a shrinking market for "good jobs." This is part of what encourages grad students in general to be so vicious to one another: we know, even if we don't often like to talk about it, that we have been forced structurally to play a negative sum game with one another. And this situation is reflected in the affects that we bear towards one another, and it's the most powerful weapon the administration has to keep us in submission and to get us to allow ourselves to be slowly starved of resources. Why? Because if you believe that you stand a shot of winning the upside that you are here chasing (one of this dwindling supply of "good jobs") you might believe that your expected value for defecting from solidarity with your grad student colleagues is rather high: if you keep your head down, and don't strike for dignity and a living wage, and don't challenge anyone's orthodoxy, you will be the lucky one.

I, personally, have always thought this was a bad trade, and that the people making it were deluding themselves, but after Corona the value of this option is crashing. If you think that sucking up and playing nice with the bosses will get you a nice career in the University system, you are making a really, really bad bet.

Consider things, for a moment, from the perspective of admin. Why is a Corona shutdown so convenient for them? Well, first of all, it's the right thing to do on its own merits, purely from an epidemiological point of view, so they get to look prudent. Second, it allows them to break the picket, and deny us the chokepoint of the road, and prevent any new picket from being set up. Third, it allows them to intervene into the testing structure, to weaken our grasp on the chokepoint of grading.

But more than this, it gives them the chance to conduct a real, live-fire experiment in doing what they wanted to do anyway: move some vast chunk of all instruction online, permanently. The "state of exception" will stretch on into a new state of "the way things just are." And it won't look good for the wages or working conditions of the instructional staff. If you think things are grim now, just wait.

What I'm saying is that the value of your PhD just crashed. Hard. Along with the price of oil, the stock market, the yield curve, and possibly, soon, the global financial system. The economy has been on central bank life support for 12 years. This has made everything very fragile, and it has made everything very austere. The fallout of 2008 is why things are so bad for us, here now at Santa Cruz - there is a direct historical causation. And if it's happening again, and if the patient is already so, so weak...

Don't count on the possibility that what you think of as "the University" will survive the shock. I'm not saying I can predict the future, but I am urging you to think about this very seriously and price "real historical Events" into the model that guides your actions as we move forward to exam week and the Spring.

Response to “Operational changes in response to COVID-19 virus”

COVID-19 is being used by university administration to assume emergency powers that can profoundly impact the way that academic work is done. There have been years of resistance to the move to online education. We see the university’s turn to emergency measures as a rehearsal for a permanent shift to large scale online instruction, accelerating the creep of online teaching with little oversight, with no bargaining, and with little to no transparency. As UCSC looks for ways to operate in the Spring after losing around 80 graduate student employees, the turn to online learning would set an alarming precedent for how a university can function without its workers.

At UC San Diego, administration has already made the cynical move of asking instructors to ensure that a gradebook on Canvas remains updated, on the pretext that course staff may become ill and be unable to process students’ grades. Graduate student-workers’ greatest power is to withhold our labor; actions like this undercut our ability to withhold our labor. Grads will continue to withhold Winter grades, and as such must resist pressure from above to put grading information online.

This has immediate consequences for faculty and undergraduates. This was a top-down decision made without input from instructional faculty, who must have autonomy over pedagogical decisions. In the immediate context, faculty face overwork in redesigning classes on the fly. For undergraduates, this is not the education that they paid for. Online teaching is a poor substitute for learning in a classroom, and has been shown to diminish the value of a university education.

As both the strike and the threat of coronavirus spread across the other UC campuses, gatherings in large groups will become more difficult as our movement grows. On our campus, this will mean that rather than focusing on maintaining a physical picket, our attention will turn to the digital picket.