Add an Event
Newswire
Calendar
Features
Home
Donate
From the Open-Publishing Calendar
From the Open-Publishing Newswire
Indybay Feature
Related Categories: Santa Cruz Indymedia | Government & Elections | Health, Housing & Public Services | Police State & Prisons
A Double-Sided Flyer to City Council on the Homeless Health Crisis
by Robert Norse & Keith McHenry
Tuesday Mar 10th, 2020 10:37 PM
A flyer distributed at the City Council Tuesday night 3-10-20, one side by me, the other by Food Not Bombs co-founder Keith McHenry, due back in town tomorrow after three weeks away.
I touch on the futility and foolishness of missing or locked sanitary facilities; Keith proposes his own 7-point program to address the escalating health and housing crisis. 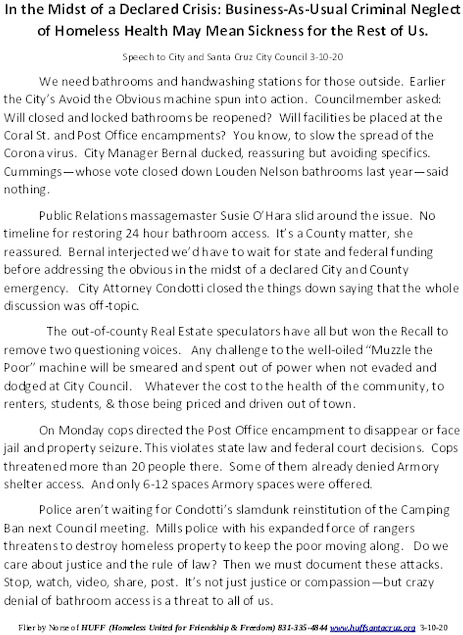 Download PDF (465.4KB)
Mayor Cummings seemed more intent in silencing the clapping and maintaining a "respectful" silence in a chamber that was full of disrespect for the Council's latest attack on Councilmember Drew Glover.

The censure was based on Glover's facebook critique of the resignations of the chair and vice-chair of the City's Commission for the Prevention of Violence Against Women. Weirdly, Glover himself as well as his "Progressive" allies on the Council voted for a resolution that involved "disapproval" of his behavior though the word "censure" was rejected.

Most public speakers denounced the censure report as a partisan move orchestrated by City Manager Martin Bernal, who recently castigated Krohn for sending a facebook article to a staff member. In the past Bernal has "directed" Bernal not to communicate directly with any staff members except through him.
§Keith McHenry's 7 Point Plan
by Robert Norse & Keith McHenry
Tuesday Mar 10th, 2020 10:37 PM 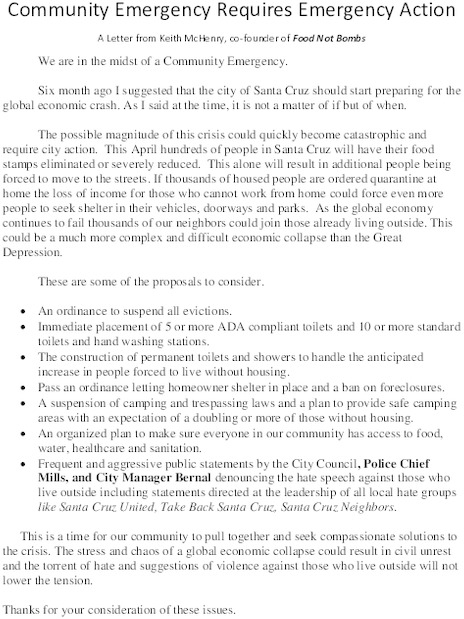