Add an Event
Newswire
Calendar
Features
Home
Donate
From the Open-Publishing Calendar
From the Open-Publishing Newswire
Indybay Feature
Related Categories: East Bay | Health, Housing & Public Services
“Homelessness, Gentrification and Counterinsurgency in Oakland”
by Uhuru Movement
Tuesday Mar 10th, 2020 1:48 PM
In California, the richest state in the US, there are tens of thousands of African and Mexican people living in tents, under tarps and overpasses.

But right now in St. Louis, the Uhuru Movement is creating the basis for an independent African economy by building the Black Power Blueprint - https://www.facebook.com/BlackPowerBlueprint/

Find out how you can challenge “Homelessness, Gentrification and Counterinsurgency in Oakland” by coming to the Uhuru House on Thursday, March 12th at 7:00 pm - 7911 MacArthur Blvd, Oakland CA (take the 57 bus, only blocks away from Eastmont Mall)

Copy the code below to embed this movie into a web page:
Download Video (47.4MB) | Embed Video
Here in the state of California tremendous wealth exists side by side with poverty and homelessness for African and Mexican people. California has the 5th highest GDP in the world, and trillions of dollars line the pockets of the highest concentration of billionaires in the US.
At the same time, there are tens of thousands of African and Mexican people living in tents, under tarps and overpasses.

This is one part of the 500 year history of colonial exploitation of African, Mexican and Indigenous people that has built the US and world economy today. Changing these conditions requires that these stolen resources return as reinvestment to colonized communities. That is why the Uhuru Movement demands that the city of Oakland make housing available to the homeless population of our city.

But these conditions can change rapidly with resources invested in programs in the hands of the African community. Right now in St. Louis, the Uhuru Movement is creating the basis for an independent African economy by building the Black Power Blueprint - https://www.facebook.com/BlackPowerBlueprint/

This dynamic program has already renovated an abandoned building to serve as the St. Louis Uhuru House. Other buildings are being renovated as the Uhuru Jiko community commercial kitchen and as multi unit housing for African people coming out of incarceration who will be learning culinary skills in the Uhuru Jiko.

We demand that the city government immediately move to end the homeless crisis in our city by making all abandoned and vacant homes available to the homeless population.

The Uhuru Movement has a long history of relentless struggle against homelessness here in Oakland.The Uhuru Movement waged a campaign for land reform and African community control of housing, putting Measure O on the ballot in 1984.

At that time the City of Oakland and the landlords waged a multi-million dollar campaign to defeat and slander Measure O. Many liberal organizations also backed the city, saying that Measure O was too punitive to landlords. While Measure O was defeated, it did win more than 69,000 votes - over 25% of votes cast - despite the slander.

The demands made in 1984 included:

• that landlords must make repairs

• the end to all unjust evictions

Measure O exposed that it IS possible to solve homelessness. There are empty houses and empty apartments. But the government protects the interests of people who profit on housing as a commodity instead of the people of Oakland. This is colonial capitalism, capitalism that rests on a base of relentless exploitation of Oakland’s colonized population, the African, Mexican and other colonized communities.

The impact of gentrification on the African community is stark:

between 2000 and 2014, Oakland saw an absolute loss of 43,777 Black residents — equivalent to 31 percent of its Black population.
According to the Alameda County Public Health Department, the life expectancy of an African child born in the flatlands is 15 years less than a white resident near Lake Merritt or in the Oakland Hills.

You can make a difference - attend the upcoming event on March 12 at the Uhuru House in East Oakland :

Homelessness, Gentrification and Counterinsurgency in Oakland - the fight for housing is a fight against colonialism!

But that’s just the first step. Without community pressure the city will never solve it. Beyond that we have to come together to build these institutions for ourselves to operate them in our own interest.

Down with homelessness! Down with slumlords, whether individuals, financial institutions or government! Homeless people and abandoned houses go together! Housing is a human right! The fight for housing is a fight against colonialism! 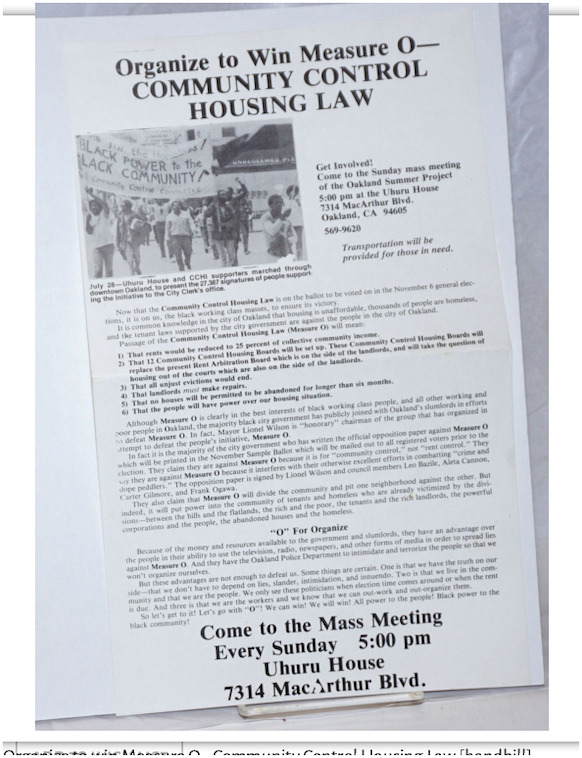 Download PDF (649.7KB)
Original flyer from the 1984 Measure O land reform campaign in Oakland, CA
https://inpdum.org
Add Your Comments
Support Independent Media
We are 100% volunteer and depend on your participation to sustain our efforts!