Add an Event
Newswire
Calendar
Features
Home
Donate
From the Open-Publishing Calendar
From the Open-Publishing Newswire
Indybay Feature
Publish to Newswire
Add an Event
Related Categories: San Francisco | Labor & Workers
Cal-OSHA, Coronavirus, Worker Dangers & Crisis In CA with Dr. Larry Rose, Former Director
by Pacifica
Sunday Mar 8th, 2020 3:43 PM
Dr. Larry Rose, former Cal-OSHA Medical Director talks about the serious staffing crisis at the agency with only 1 doctor and 1 nurse for California's 19 million workers.
He also talks about how this effects the health and safety of not only workers but the public and the growing corruption scandal in the state government with former DIR Director Christine Baker who had her daughter in a no-show job paying over $120,000 a year. 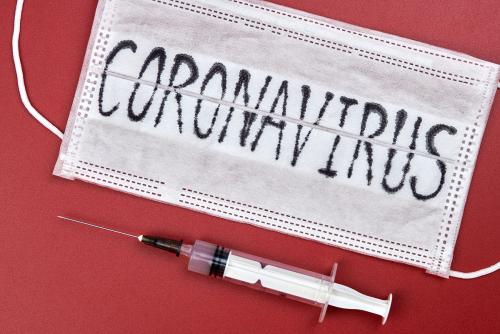 Dr. Larry Rose, former Cal-OSHA Medical Director talks about the danger to workers and the public with coronavirus and the massive staffing crisis in California with only one doctor and one nurse for the 19 million workers of California.

According to Dr. Rose, the lack of staffing at Cal-OSHA prevents the agency from protecting workers and the public in the growing pandemic in California and the world. Cal-OSHA is tasked with investigating health and safety violations and has only around 200 inspectors in California to enforce California OSHA regulations.

He also discusses the need for protection of workers who wear masks on the job. Workers could be fired for trying to protect their health and safety on the job.

Rose also talks about the corruption of the former Division of Industrial Relations DIR Christine Baker who bullied Cal-OSHA workers and colluded with companies to limit enforcement and liability.

She also engaged in fraud putting her daughter in a no-show job at $120,000 a year. She was forced to resign after a state audit but former governor Jerry Brown before he left office appointed her to the California Fraud Assessment Commission FAC and Governor Gavin Newsom let her take this position.

This interview took place on 23/7/20 by Pacifica correspondent Steve Zeltzer who also produces WorkWeek on KPOO.

CA State Audit Investigation of Improper Activities by a State Agency DIR and Its Employees
https://www.wcexec.com/wp-content/uploads/2019/04/DIR-audit-report.pdf

In a 20-page report, the former special assistant to the head of Cal/OSHA argues that a "starvation diet" is creating severe understaffing and is weakening worker protection. The official, Garrett Brown, resigned in late December after 20 years at the agency, more than 17 of them as a field inspector.

"I felt that the agency was being driven into the ground in terms of staff and resources and there were a number of policy decisions I could not in good conscience implement," Brown told KPCC.

Former Cal/OSHA Chief Ellen Widess, who said that she was forced to resign last September, echoed Brown’s concerns about the agency in an interview with KPCC.

Both former officials contend that the administration of Gov. Jerry Brown has been unwilling to spend money to hire additional inspectors despite a surplus in the state Occupational Safety and Health Fund.

A whistleblower advocacy group Brown is associated with, Public Employees for Environmental Responsibility, will file a formal complaint based on Brown's paper with federal OSHA Tuesday. The complaint will seek sanctions against Cal/OSHA for failing to meet worker protection standards.

Garrett Brown said the agency had 170 inspectors in December. According to figures provided by the State Employment Department, that would amount to roughly one inspector for every 100,000 workers in California.

Gov. Brown’s proposed budget would add another 25 inspectors, but Garrett Brown argues that that would still leave Cal/OSHA far short of the number it needs.

He said Washington state and Oregon have much lower ratios of inspectors to workers. Oregon has about 1 inspector for every 21,000 workers, according to statistics provided by that state’s Employment Department and the Oregon OSHA.

Having an undermanned inspection force leads to fewer workplace inspections and slower response to workplace injuries, Brown and Widess said.

Cal/OSHA needs to "thoroughly and quickly" investigate accidents involving workers, Widess said, adding: "We are [conducting] fewer inspections to uncover toxic chemicals and other problems that can result in death."

The governor’s office referred KPCC’s interview requests to DIR and Cal/OSHA. In response, the agencies issued a statement challenging Garrett Brown’s numbers. They asserted that they have 182 inspectors "dedicated to the enforcement unit," and another 132 "inspectors working in areas such as interagency enforcement, and other related enforcement activities."

Brown and Widess say the DIR is unwilling to spend surplus funds sitting in the Occupational Safety and Health Fund – which they say is the main source of Cal/OSHA enforcement funding.

Widess said the OSHA Fund, which comes from employer fees, ended the last fiscal year n June with $24.8 million. It is projected to have a $26.1 million surplus by this June and a $29.5 million surplus by June 2015, according to Gov. Brown’s proposed budget.

Widess said she repeatedly asked DIR Director Baker and the state Labor Secretary, Marty Morgenstern, to tap those funds to hire more inspectors, but was denied, “for reasons that were never explained to me.”

"It remains a real mystery as to why we were never able to access that funding," even after the agency took a $3 million hit last year because of federal sequestration, Widess added.

In their joint statement, the DIR and Cal/OSHA said that "any excess funds in the account are used for cash flow purposes (6 months) until the next assessment."

Garrett Brown said he decided that he could do more to influence Cal/OSHA’s direction working outside the agency. 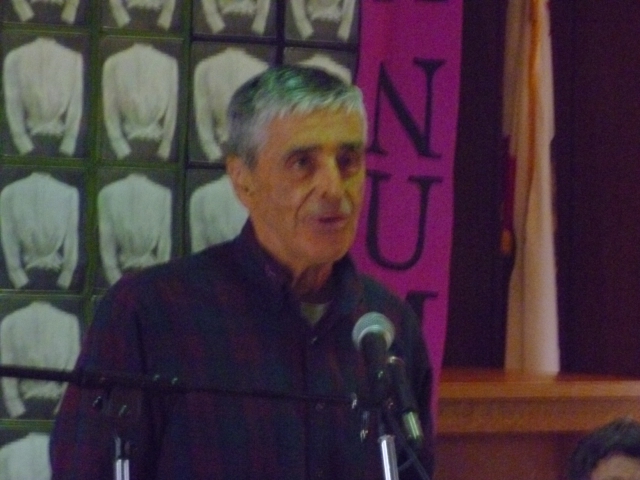 Former Cal-OSHA Medical Director reports that there is only 1 doctor and 1 nurse at Cal-OSHA for the 19 million workers in California.
https://youtu.be/9G_yQJQHe9Y
§Former Cal-OSHA Chief Ellen Widess
by Pacifica Sunday Mar 8th, 2020 3:43 PM 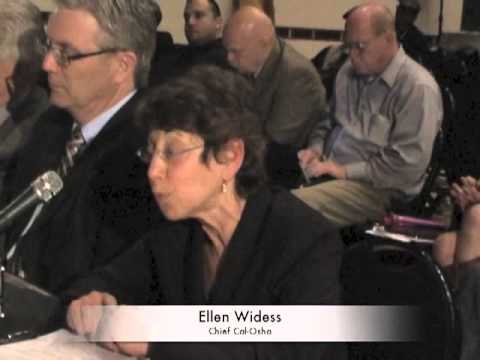 Former Cal-OSHA Chief Ellen Widess was fired by DIR Director Christine Baker for enforcing OSHA regulations against the oil industry. Baker was colluding with the oil industry and corporations in California to protect their businesses.
https://youtu.be/9G_yQJQHe9Y
§Longshore Workers Have No Protection & Training For Diamond Princess
by Pacifica Sunday Mar 8th, 2020 3:43 PM 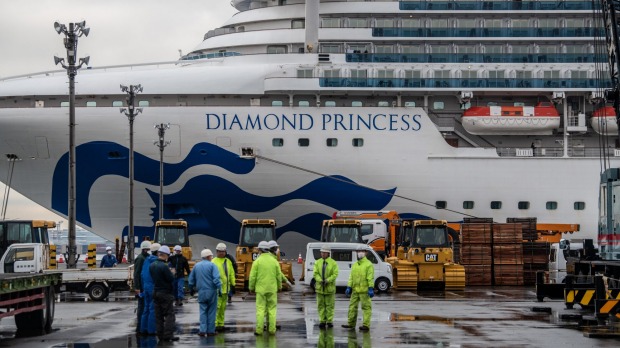 Longshore workers have no education and protection when handling contaminated ships like the Diamond Princess and Grand Princess. Many workers on the ship were contaminated and contaminated the passengers.
https://youtu.be/9G_yQJQHe9Y
§Governor Newsom Has Butchered Cal-OSHA Funding
by Pacifica Sunday Mar 8th, 2020 3:43 PM 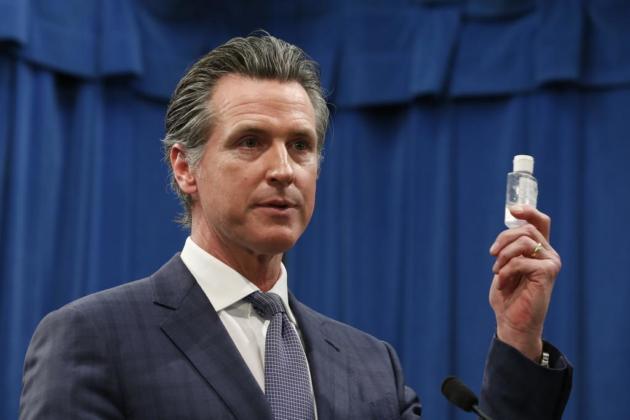 Governor Gavin Newsom has continued the butchering of Cal-OSHA staff and has allowed the bullying of OSHA investigators and staff. He also has continued to allow a mass vacancy of only around 200 OSHA inspectors for 19 million California workers.
https://youtu.be/9G_yQJQHe9Y
Add Your Comments
Support Independent Media
We are 100% volunteer and depend on your participation to sustain our efforts!