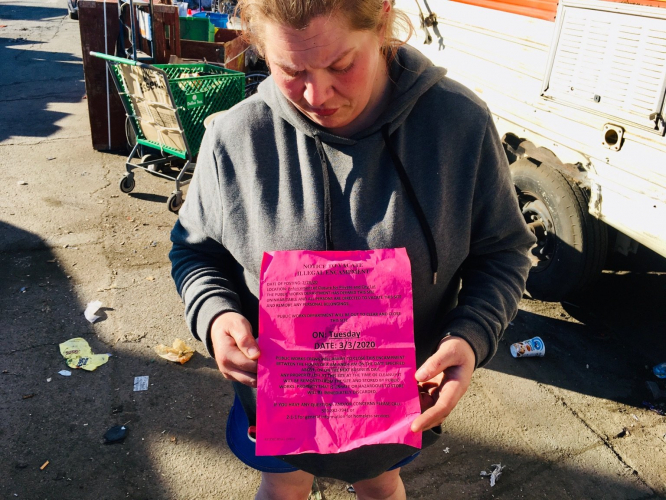 original image (1536x1152)
Oakland, CA — The City of Oakland will not be able to close the last section of the infamous encampment at E.8th Street and Alameda Ave., adjacent to the Fruitvale Home Depot, if they cannot follow their own policy regarding the treatment of people's property.

The city was scheduled to evict the residents on the East a cul-de-sac this morning. However, The East Oakland Collective, The Village, Love and Justice in the Streets, and Homeless Advocacy Working Group (HAWG) have negotiated with the City for an extension of the closure to March 4, still leaving 11 unhoused residents with no where to go.

Residents had filed civil rights lawsuits and temporary restraining orders Friday and yesterday in an attempt to hold the city accountable and pause the eviction until they and their property could be properly relocated.

According to United States District Judge Charles Breyer of the Northern District of California, the city must follow their encampment management policy that states all property will the bagged tagged and stored up to 90 days for free. The judge also cited that according to the city's own policies Department of Public Works could not touch or take people's property if the owner of the property was still present.

The last remaining residents have no where to go and their tiny homes, RVs and vehicles were in jeopardy of being destroyed or towed. Working against the clock, community advocates demanded that the City postpone the closure for at least two weeks until adequate housing and shelter is offered and/or relocation secured for the residents with tiny homes and RVs.

The judge went beyond that call and asserted the city needed to follow its own policies.

We demand that the City follow the court's order and not take and/or destroy any of the residents' properties. We demand that the City take a more Humane path and work with advocates and residents to find adequate housing and/or new placement for the remaining unhoused residents who due to barriers and challenges, could not move into the City’s new safe RV parking lot, tuff sheds or the shelter bed system.

﻿Because the city has had a history of going back on its word in regards to agreement made with unhoused communities, residents,and advocates are calling for people to show up tomorrow at 7:45 to document and assert the city follow ots policies as the judge ordered.

Since October 2019, residents of this community face eviction every two weeks. These residents are from the block that they are currently homeless on.

These residents in Deep East are asking community to stand with them tomorrow morning and Thursday morning beginning at 7:45 a.m. to document and help them resist the eviction. They have been notified of today's temporary restraining order in regards to the city's inability to follow their own policies.


http://www.eastoaklandcollective.com
https://thevillageinoakland.org
https://www.loveandjusticeinthestreets.com
https://www.shelteroak.org/hawg.html
Add Your Comments
Comments (Hide Comments)
§Eviction housing
by Pamela m-p
Is there anyway that we can ask the city to have places for people to move to before evection? If we have legal capacity for belongings, is there no way to make this city offer alternate locations for housing?
Add a Comment
Support Independent Media
We are 100% volunteer and depend on your participation to sustain our efforts!