Add an Event
Newswire
Calendar
Features
Home
Donate
From the Open-Publishing Calendar
From the Open-Publishing Newswire
Indybay Feature
Publish to Newswire
Add an Event
Related Categories: California | Santa Cruz Indymedia | Education & Student Activism | Labor & Workers
Strike Escalates After UCSC Fires Nearly 100 Graduate Student Workers
by Spread The Strike!
Saturday Feb 29th, 2020 12:48 PM
Graduate students at UC Santa Cruz are calling for the cancellation of classes on Monday and for everyone to join us on the picket for a press conference at 9am. On Monday, we wear red for the future of higher ed. The strike continues. See you on the picket. 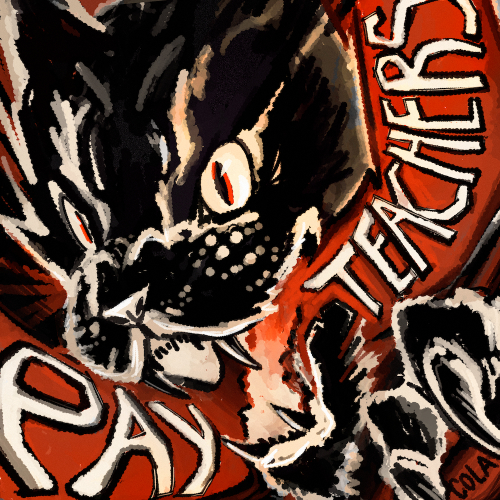 At least 82 grad students withheld Fall grades and, as of Feb 28, are out of a job next quarter. 54 who had already received Spring appointments were dismissed, and the rest simply won’t get hired (they received notice that they “will no longer be considered” for these appointments). But the fight isn’t over! More TAs will withhold Winter grades, and over 542 grads have pledged to refuse TAships vacated by dismissed grads. Together, we win!

In response to this grave administrative escalation, we call for the cancellation of classes on Monday and for everyone to join us on the picket for a press conference at 9am. On Monday, we wear red for the future of higher ed. The strike continues. See you on the picket.

The picket will continue, everyday next week (Mar 2-6), 7:30am-5:30pm at the base of campus, with General Assemblies at 4:30pm! Check Twitter and Instagram for the latest strike info.

I wanted to write again with some updates from the ongoing strike.
For the 14th day, graduate students, undergraduates, faculty, staff, lecturers, and others rallied at the base of campus. For the 14th consecutive working day, metro bus drivers refused to cross the picket line in solidarity with striking graduate students. Today’s energy built from yesterday’s Radical History March and Teach In which moved across campus gathering support and teaching about the history of student and labor organizing at UC Santa Cruz. Strikers sang and chanted about the legacy of social movements that they now join, before marching down to the base where they peacefully shut down the main entrance to campus.

Just after noon today, EVC Lori Kletzer wrote to inform graduate students that they were being fired from their spring appointments. In an email which began with laughable posturing about “increasing support” and “caring deeply” about graduate students, Lori Kletzer proceeded to fire close to 100 graduate students, knowingly and willingly depriving them of housing, medical care, the ability to feed their children and families, and condemning international students to deportation. As one grad noted, “Nothing like being fired by someone who really cares.” It is worth reiterating that EVC Kletzer’s claim to have attempted to “find an amenable resolution” is false, or in a more colloquial sense, a lie. Administration has never agreed to discuss “amenable solutions” with graduate students, preferring instead to dictate the terms of a labor dispute, to call in police to arrest and brutalize students, and then to fire them unilaterally, going against the directives and wishes of the Faculty Senate, the Graduate Student Association, and the undergraduate Student Union Assembly.

This is mayday. To meet this egregious escalation, strikers are organizing for a massive week of action for this coming week 9. In an incredible show of solidarity, more than 500 graduate students have so far pledged to refuse appointments and go on strike. We will need all hands on deck to disrupt the violence of this university and to fight for a living wage for graduate workers. Faculty are called upon to get organized as quickly as possible and to move towards a full teaching strike. Together, faculty, graduate students, undergraduates, staff, and lecturers continue to fight for living wages for all of us, and for a university that works for all of us, not just the privileged or elite. And so the strike continues!

If you have ever cared about a graduate student we need you at the picket line on Monday. This is about your friends, your students, and the future of graduate education at the University of California. Please come join us in defiant celebration wearing red for education.

As of today, UCSC has spent at least $4.2 million on police presence at the picket line. This is nearly 20% of the annual cost of a COLA for all graduates at UCSC at the rate of $1412 per month. It was also revealed today that Chancellor Cynthia Larive is in charge of a discretionary fund of approximately $120 million dollars, from which the police presence at the picket line has been paid. In other words, Larive could have paid for the entire annual cost of a COLA for all grads and still had $100 million left over in her no-strings-attached slush fund. While administration has made its priorities clear, we nevertheless, once again, invite them to negotiate in good faith to bring this strike to an end and to prevent further ongoing labor actions.

Yesterday as strikers chanted “UC UC you can’t hide, this strike’s going UC wide!,” the strike was indeed spreading like wildfire. On Thursday UC Santa Barbara began a full teaching strike to demand their own COLA and in solidarity with UCSC, while UC Davis also began a grading strike. UC Irvine, UC Riverside, UC Berkeley, UCLA, UC Merced, and UC San Diego are organizing toward strikes of their own. Meanwhile, yesterday the statewide UC graduate workers union UAW 2865 has filed Unfair Labor Practice charges against the University of California, and today Senator Bernie Sanders again called on Janet Napolitano and UCSC to negotiate with striking graduate students and stop union-busting.

More information about the week ahead will be forthcoming but we are planning a massive “Red for Ed” rally on Monday, a Get out the Vote / Super BBQs-day on Tuesday with voter taxis, and a “Cola-chela” lineup of musical performances on Wednesday as a taste.
Some of today’s action items:

As always, thank you so so much for your support, and extra special thanks to our undergraduates and to the faculty who have been coming out to support strikers–we are so grateful.

See you Monday!
P.S. Please feel free to forward and share this message.

This is disgraceful. All workers deserve the right to bargain and strike for better wages and benefits. To Janet Napolitano and @UCSC: stop this outrageous union busting and negotiate in good faith. https://t.co/oaQGTovOdW

It is worth noting, firstly, that more than 54 graduate student workers were fired or barred from spring appointments on Friday, including at least ten international students. The number is certainly higher than 70 and may be around or above 80.

I wanted to state the obvious point that these firings are not yet final. They can be reversed at any moment. That is, they are now a site of struggle for our community.

But I wanted to share my simple conviction that no community deserving of the name would permit 70-80 of its members to be fired for a peaceful struggle for the ability to pay rent. In the words of our STEM colleagues, this is a deplorable action.

The support outside of UCSC since the firings has been swift and enormous. Since the news broke, the strike fund has received nearly $100,000. People across the UC system are organizing weeks of action and graduate student workers move closer to striking every day, both for our reinstatement and for their own COLA. Before the firings, thousands of faculty across the country committed to effectively boycott UCSC in the event of mass firings.

But once again, and even after grueling months of struggle with administrative threats and police violence, the response that matters most is the one within the UCSC community. It is a moment that demands nothing less than the most meaningful forms of solidarity: more grading strikes, mutual aid, class cancellation, protest, picketing, collective job refusals, boycotts, work stoppages, etc.

This starts on Monday at a press conference on the picket at 9:30am and does not stop until we are reinstated, safe, and making genuine progress towards the implementation of a COLA.

I’ll see you on the picket.

We, graduate students in science, technology, engineering and mathematics (STEM) departments at UC Santa Cruz, are disgusted by the administration’s decision to fire at least 54 teaching assistants, and we are enraged by the de-facto deportation of striking international graduate students.

This action is, in a word, deplorable.

Even as our community reels from this blow, our movement is growing. In particular, support within STEM departments is growing. STEM students and departments will not sit idly by as their colleagues are terminated for asking for enough money to live where they work. We will not put our heads down and just focus on our research while our friends and collaborators are deported. We will fight back. As of writing, at least 212 STEM graduate students representing eight STEM departments across the university have pledged to refuse teaching assistantships in the Spring quarter as a result of these firings.

Instead of firing the people who dedicate their lives to the mission of education and research at UCSC, we demand that you resolve this strike.

Signed,
UC Santa Cruz STEM graduate students
Add a Comment
Support Independent Media
We are 100% volunteer and depend on your participation to sustain our efforts!