Add an Event
Newswire
Calendar
Features
Home
Donate
From the Open-Publishing Calendar
From the Open-Publishing Newswire
Indybay Feature
Publish to Newswire
Add an Event
Related Categories: Santa Cruz Indymedia | Drug War | Government & Elections | Health, Housing & Public Services
SSP Commissioner Deletes Harassing Posts, Commits to "Professional Interactions" in Future
by Santa Cruz News Network
Saturday Feb 29th, 2020 12:55 AM
Damon Bruder, Supervisor Ryan Coonerty's appointee to Santa Cruz County's Syringe Services Program (SSP) Advisory Commission, has deleted the harassing and bullying statements he made on on Facebook on February 14 about County Health officer Rachel McCullough-Sanden. Bruder, who was complaining about delays in the publication of the monthly public SSP report to the County's website, called McCullough-Sanden "daft" and made other harassing statements on social media posts that displayed a disparaging photo of her. McCullough-Sanden is an Epidemiologist and HIV Surveillance Coordinator at the Santa Cruz County Health Services Agency (HSA), and one of the individuals tasked with producing the SSP reports. "I have asked to Damon Bruder to delete his posts, meet with HSA staff and to commit to professional interactions going forward," Supervisor Coonerty explained in an email to a reporter with Santa Cruz News Network on Friday morning. "He agreed," Supervisor Coonerty stated. (Photo: Damon Bruder speaks to the Board of Supervisors in 2017.) 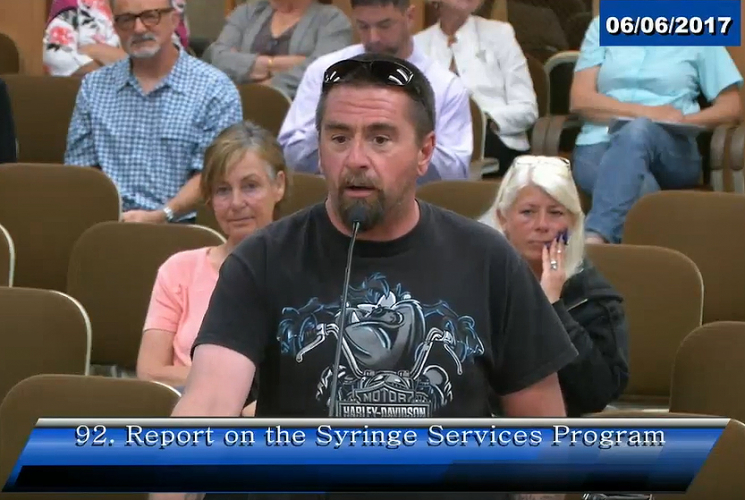 On January 14, the Board of Supervisors appointed Damon Bruder as the Third District appointee to the Syringe Services Program Advisory Commission for a term to expire April 1, 2024, as recommended by Supervisor Ryan Coonerty. Bruder is a public safety advocate and self-professed former drug user who has been known for stridently expressing his beliefs about the Syringe Services Program at Board of Supervisors meetings, long before he was appointed to the SSP advisory commission.

Over the course of two months, Bruder made multiple inappropriate statements about McCullough-Sanden on the social media pages of Santa Cruz, CA: Keepin' it Real, which many call a hate blog. The harassing comments he made on February 14 on the Santa Cruz, CA: Keepin' It Real's Facebook page are now gone, but inappropriate tweets Bruder made on December 26, along with his domestic partner, Santa Cruz County Republican Party Central Committee Member Page Concannon, remain visible on the blog's Twitter page.

Santa Cruz, CA: Keepin' it Real is published by a retired Soledad State Prison guard named Joe Netro, who posts anonymously to the blog as "Big Joe 77". The Syringe Services Program has been one of Joe Netro's primary targets. Netro regularly harasses women as part of a pattern of character assassination, and the women he targets are usually involved with syringe exchange services, or homeless advocacy of some sort.

Netro and Supervisor Coonerty have been corresponding through email. On December 30, Netro posted to the Santa Cruz, CA: Keepin' It Real Facebook page that Coonerty emailed him for his "help" on another issue relating to syringe exchange.

Netro quoted Supervisor Coonerty as saying: “Bruce McPherson (District 5) and I plan to bring an item to the Board opposing the HRC [Harm Reduction Coalition] application and will need your help to get a majority of the Board to take a stand on this important issue."

In an email sent on Thursday morning, Santa Cruz News Network directed Supervisor Coonerty to several harassing posts made by Bruder, Concannon, and Netro, and asked the Supervisor, "Do you feel that Netro's blog is an appropriate place for you to seek political support when it is the location of so many bullying posts targeting women and County Workers?"

"I was not aware of those posts," Supervisor Coonerty wrote. "Joe Netro was one of more than 300 people I reached out who had previously communicated with my office about this issue. This is a normal practice for me on land use and other issues."

"It would be inappropriate for me to tell Joe Netro or Paige Concannon what to say online," Supervisor Coonerty added. "Neither have any affiliation with my office." 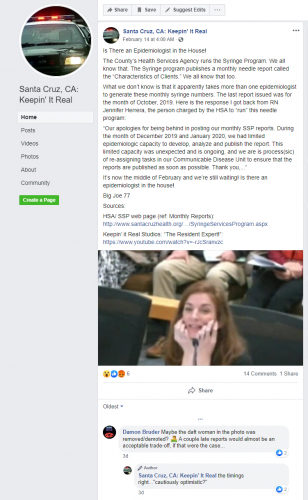 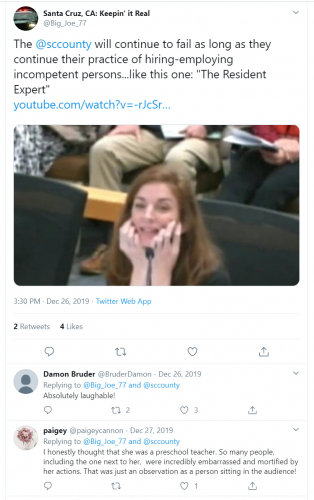 original image (748x1188)
Add Your Comments
Support Independent Media
We are 100% volunteer and depend on your participation to sustain our efforts!