Autonomy and State Repression: From Kurdistan to Philadelphia 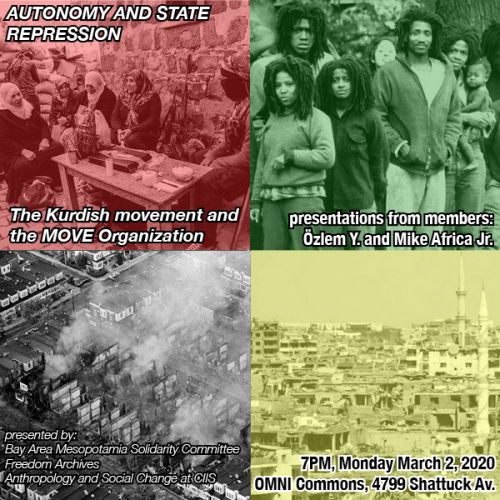 presented by the Bay Area Mesopotamia Solidarity Committee, the Freedom Archives and the Anthropology and Social Change Department at CIIS

The Kurdish freedom movement, currently active across many borders in the Middle East, has put forth the revolutionary project of democratic confederalism under the principles of localized governance, women’s liberation and ecological practices.

On a smaller scale, but within the context of the massive Black liberation movement, the MOVE Organization of Philadelphia put its revolutionary ideas into practice in the 70s and 80s.

Both initiatives have faced the iron fist of the state for daring to organize autonomously.

During the summer of 2015, the Turkish army and mercenaries bombed Kurdish cities, killing hundreds of people. These brutal attacks were a terrifying re-escalation of Turkey's 40-year civil war, between the State and the a left-wing Kurdish movement. The Turkish state justified the carnage by calling the political organizing of Kurdish communities into question.

Many of us on occupied land here in the US cannot help but consider similarities and differences between these attacks and the City of Philadelphia's attack on a mostly African-American neighborhood that killed 11 members of MOVE and destroyed 61 homes in 1985. Philadelphia politicians similarly attempted to reframe the narrative by questioning the legitimacy of MOVE, and their integrity as a political organization.

What do the attacks on the Kurdish movement and the MOVE Organization, their aftermath, the ongoing struggles of the survivors, and the ongoing lack of justice for the dead teach us about the nature of the state, autonomous organization and racial and ethnic stratification?

Please join us for a double feature with presentations from Özlem Y., a Kurdish activist, and Mike Africa Jr., from MOVE, as we attempt to answer these questions, and consider new ones.

Özlem Y., currently in exile in the US, was a firsthand witness to the Turkish atrocities in autonomous Kurdistan where she was part of the Kurdish municipal governance structure.

Mike Africa Jr., a member of MOVE, is a speaker, writer and artist. He was born in prison to Debbie and Mike Africa who were each serving a 30 year sentence as part of the MOVE 9.
Added to the calendar on Fri, Feb 28, 2020 3:06PM
Add Your Comments
Support Independent Media
We are 100% volunteer and depend on your participation to sustain our efforts!