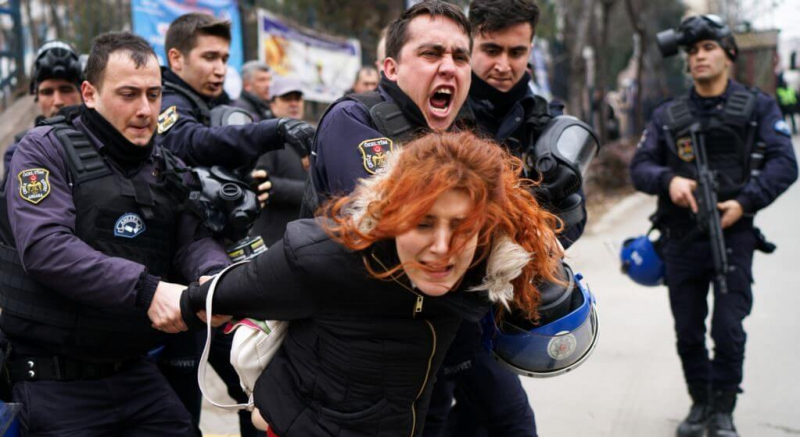 original image (1023x559)
Police have attacked professors in students protesting the privatization and wars against the Kurdish people and attacks on Syria
§Turkish Police Trample On Academic Robes
by UCB Dep. Of Sociology Friday Feb 28th, 2020 8:21 AM 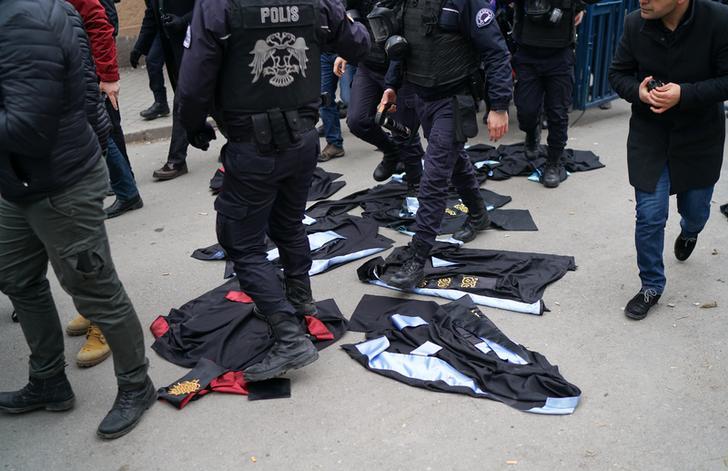 The Erdogan police trampling on the robes of academics in Turkey.
§Flyer For Whither Turkey? Struggles, Setbacks, Possibilities
by Event Flyer For UCB Event Friday Feb 28th, 2020 8:51 AM 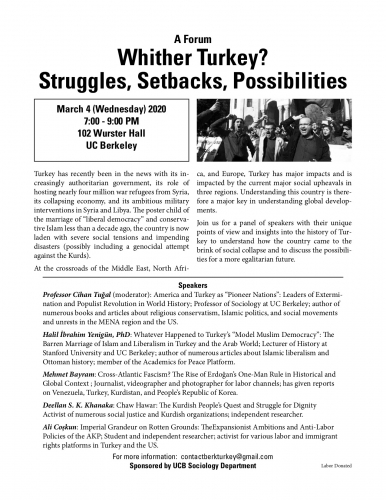 
Turkey has recently been in the news with its increasingly authoritarian government, its role of hosting nearly four million war refugees from Syria, its collapsing economy, and its ambitious military interventions in Syria and Libya. The poster child of the marriage of “liberal democracy” and conserva- tive Islam less than a decade ago, the country is now laden with severe social tensions and impending disasters (possibly including a genocidal attempt against the Kurds).

At the crossroads of the Middle East, North Africa, and Europe, Turkey has major impacts and is impacted by the current major social upheavals in three regions. Understanding this country is there- fore a major key in understanding global developments.

Join us for a panel of speakers with their unique points of view and insights into the history of Tur- key to understand how the country came to the brink of social collapse and to discuss the possibilities for a more egalitarian future.

Professor Cihan Tuğal (moderator): America and Turkey as “Pioneer Nations”: Leaders of Extermi- nation and Populist Revolution in World History; Professor of Sociology at UC Berkeley; author of numerous books and articles about religious conservatism, Islamic politics, and social movements and unrests in the MENA region and the US.

Halil İbrahim Yenigün, PhD: Whatever Happened to Turkey’s “Model Muslim Democracy”: The Barren Marriage of Islam and Liberalism in Turkey and the Arab World; Lecturer of History at Stanford University and UC Berkeley; author of numerous articles about Islamic liberalism and Ottoman history; member of the Academics for Peace Platform.

Mehmet Bayram: Cross-Atlantic Fascism? The Rise of Erdoğan’s One-Man Rule in Historical and Global Context ; Journalist, videographer and photographer for labor channels; has given reports on Venezuela, Turkey, Kurdistan, and People’s Republic of Korea.

Ali Coşkun: Imperial Grandeur on Rotten Grounds: TheExpansionist Ambitions and Anti-Labor Policies of the AKP; Student and independent researcher; activist for various labor and immigrant rights platforms in Turkey and the US.

For more information: contactberkturkey [at] gmail.com

Sponsored by UCB Sociology Department
Add Your Comments
Support Independent Media
We are 100% volunteer and depend on your participation to sustain our efforts!