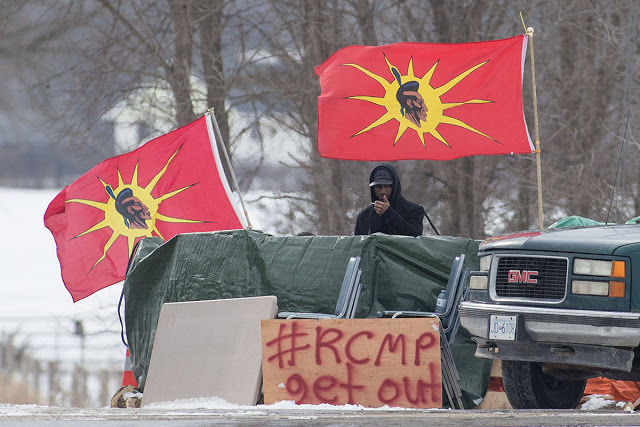 Mark Maracle of the Mohawk Warrior Society said Tohono O'odham should shut down construction of the border wall. Maracle said Mohawks stand ready to help them and fear should not control their minds.

"They should blockade the fence," Maracle told Censored News.

"The support has grown all across Turtle Island."

"When we were down there, we told them if they want to do something we would be supportive," Maracle said of a large delegation of Mohawks to the Tohono O'odham Nation during the Indigenous Peoples Border Summit.

"They have to take the initiative down there to do it on their own."

"They should have no fear when the truth is on their side."

Maracle said Tohono O'odham should not allow fear to control their minds. "All it takes is a couple of people, and for them to put up the Mohawk flag."

During the Indigenous Peoples Border Summit in 2007, Mohawks were on the border on the Tohono O'odham Nation south of Sells, Arizona. They saw U.S. Border Patrol agents arresting Indigenous women and children and jumped from their cars on the road and ran to rescue those being arrested. The U.S. Border Patrol agents, shaken and afraid rushed away with the young women and children in the federal paddy women on the Tohono O'odham Nation.

Already on Organ Pipe Cactus National Monument on the Arizona border, located near the western edge of the Tohono O'odham Nation, the Trump administration has blasted in the area of Monument Hill, an area where human remains were found during the border wall destruction. The area was a burial place for the ancestors of Tohono O'odham.

Meanwhile, in Canada, rail, highway, bridge, port and border blockades increased throughout the country after the arrest of Tyendinaga Mohawks on Monday, who are supporting Wet'suwet'en.

In Canada, Ontario Provencial Police raided the Tyendinaga Mohawk camp alongside the train tracks and made 10 arrests on Monday morning.

Kahnawake Mohawks maintain their camp alongside the rails in Quebec. GO trains were shut down today by another rail blockade. Blockades were underway today in Port of Vancouver, Victoria, Ottawa, Toronto and elsewhere.

Kanasatake Mohawks blocked a highway on Monday. VIA Rails announced earlier it shut down its nationwide trains as the rail blockades expanded, in support of Wet'suwet'en.

Cheyenne River Lakota Chairman Harold Frazier in South Dakota sent a statement of solidarity with the Wet'suwet'en, pointing out that the same struggle is faced by all Native people that battle the invasion of their lands, robbing of their resources, rape of their people and destruction of their lands.

"The Mohawks are among the many who are likely to suffer from paramilitary 'police' actions adding human casualties to the damage done to our land," Chairman Frazier said.

Chairman Frazier said the "greedy that prey on this land are worse than any other virus in existence."

Amnesty International was at Tyendinaga and released a strong statement, which concludes with, "Prime Minister, you face an unprecedented opportunity to break with decades of failure when it comes to the relationship with Indigenous peoples in Canada. To do so means putting rights first, embracing the full complexity of reconciliation and making it clear to all Canadians that while the road ahead will not always be easy, it is the only path to a just and sustainable future for our country."

Maracle's message to Tohono O'odham on the border is, "All it takes is a couple of people, and for them to put up the Mohawk flag."


Article copyright Brenda Norrell
https://bsnorrell.blogspot.com/2020/02/moh...
Add Your Comments
Support Independent Media
We are 100% volunteer and depend on your participation to sustain our efforts!