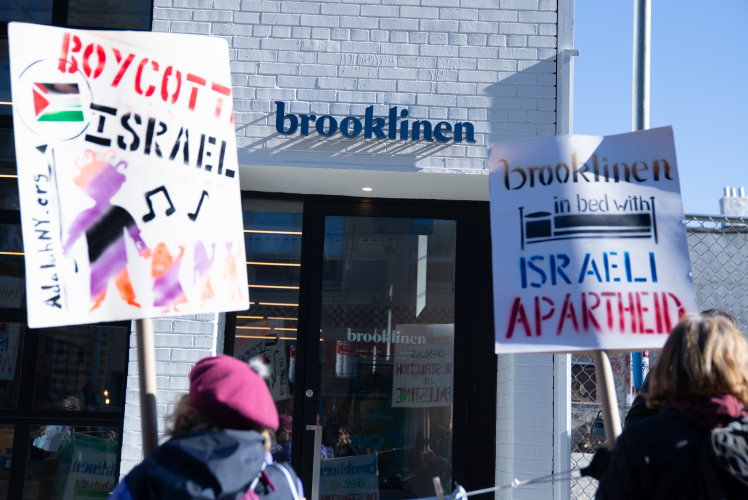 February 24, 2020 – At a protest Sunday at Brooklinen’s new Williamsburg, Brooklyn store, New York human rights advocates called for a boycott of the online sheet and linen retailer, over their Israeli production partners’ involvement in Israel’s apartheid rule over the Palestinian people. The protest came amidst international outrage over the Israeli military’s abuse with a bulldozer of the body of Palestinian in the impoverished Gaza Strip, an open-air prison with two million residents.

Brooklinen has escaped scrutiny and parried questions about the specifics of its production of its sheets and linens in Israel. Brooklinen’s products are made by Israel’s Offis Textile, which also has murky ties with the Israeli company Ofertex. The two Israeli companies have been involved with illegal Israeli settlements and have exploited captive Palestinian workers. Their taxes fund Israel’s apartheid system.

Outside the store, the protesters then hung the pillowcases, Brooklinen’s dirty laundry, on a clothesline, and held signs, sang, chanted, and passed out flyers to passersby.

One musical protest highlight was a rendition of “Dirty deeds, done with sheets” to the tune of an AC/DC song, that included lyrics, “Shut down your store, just lock the door, or heed the boycott call.” Protesters also sang “All we need is boycott, sweet boycott, there’ll be justice everywhere,” as part of a remixed version entitled “Apartheid in Your Sheets,” of the Martha and the Vandellas classic, “Dancing in the Street.”

Allison Brown of Adalah-NY explained, “Brooklinen wants to sell a lifestyle of comfort, but it’s hiding some uncomfortable truths under its sheets. Palestinian civil society calls on people of conscience to boycott the products of Israeli companies that are complicit in Israel’s violations of Palestinian rights, to pressure Israel to comply with international law. Brooklinen must end all dealings with complicit Israeli companies.”

In 2011 Offis Textile said its products were sewn in an illegal Israeli settlement, Barkan, on stolen Palestinian land, and in other towns where Palestinians live under Israeli military occupation or as second-class citizens. Offis said it chose those locations for the cheap labor cost, effectively exploiting Palestinians, deprived of their basic rights, in sweatshops.

2017 Israeli government ownership data and Israeli news reports suggest Offis is either partially or fully owned by the Israeli company Ofertex, which is on the United Nations list of companies complicit in Israel’s illegal settlement project, because it’s also based in the illegal Barkan settlement. Ofertex also has a track record of violating the rights of its Palestinian workers, according to the Israeli labor rights group Kav La Oved.

Brooklinen founder Rich Fulop is an active supporter of Birthright Israel, an organization that offers every young Jewish person a free trip to Israel, with some going on to become Israeli citizens, while adamantly denying the right of Palestinian refugees to return to their homeland, and to their villages, like Yazur.


http://adalahny.org
Add Your Comments
Support Independent Media
We are 100% volunteer and depend on your participation to sustain our efforts!