Add an Event
Newswire
Calendar
Features
Home
Donate
From the Open-Publishing Calendar
From the Open-Publishing Newswire
Indybay Feature
Publish to Newswire
Add an Event
Related Categories: Santa Cruz Indymedia | Environment & Forest Defense | Government & Elections | Health, Housing & Public Services
Achievements of City Council's Progressive Majority Defy the Recall
by Santa Cruz News Network
Sunday Feb 23rd, 2020 5:03 PM
Despite the recall campaign, the Progressive majority on the Santa Cruz City Council remained focused on work in 2019 and 2020, accomplishing more in a short period of time than any other Council in recent memory. In January, Progressives published a list which noted significant achievements by the Council on affordable housing issues, the increased funding of emergency shelter options for the homeless, and work on environmental issues, among other successes. This article supplements the list published by Progressives (see below). (Photo: The new Progressive majority on the Santa Cruz City Council, shortly after election results were announced in 2018: Justin Cummings, Drew Glover, Sandy Brown, and Chris Krohn.) 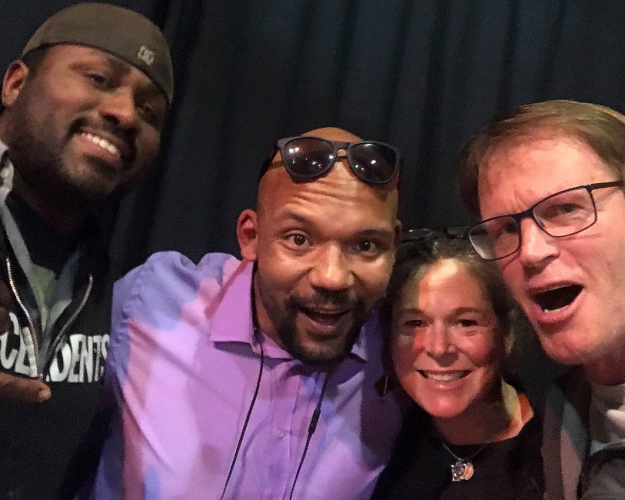 * Raised the inclusionary zoning of affordable units on new construction from 15% to 20%. Developers in the City of Santa Cruz will now be required to build 20% of new housing units at affordable, below-market rates.

* Secured funding for the warming center, a 24/7 shelter, and re-opened the National Guard Armory and 1220 River Street

* Gave the largest raise to city workers in a generation

* Introduced proposal for the establishment of a Beach Flats Improvement Fund

* Passed Resolution to support the Amah Mutsun Tribal Band to protect their sacred lands of Juristac, which is located in the Santa Cruz Mountains

Environmental groups are among those who have been most vocal in praising the work of the Progressive Councilmembers.

In August, the Santa Cruz Climate Action Network posted on social media that Councilmember Drew Glover was a "visionary" for his work as lead sponsor of the Green New Deal Resolution.

The Santa Cruz Sierra Club opposes the recall of Councilmembers Drew Glover and Chris Krohn, stating, "Councilmembers Glover and Krohn originally earned the Sierra Club’s endorsement through a rigorous vetting process. As elected officials, both have energetically followed through on their commitment to the environment."

"Both Councilmembers are important to the council majority that protects our local environment," the Sierra Club stated. "They have taken the lead in providing free bus passes to downtown employees; supporting our City’s urban tree canopy; protecting the site of the downtown Farmer's Market from development into a $40 million parking structure; managing UCSC growth in the context of finite natural resources; renovating our downtown library at the civic center; requiring that a minimum 20% of new housing be kept affordable to local workers; and protecting our greenbelt from overuse and degradation."

On February 18, the international group CDP (formerly the Carbon Disclosure Project) announced that the City of Santa Cruz was named as one of the top 105 global cities for climate action in 2019. Santa Cruz had not made the list in 2018.

"Cities are taking the climate crisis more seriously than before. In the space of a year, the number of cities on the A List has grown from 43 in 2018 to 105 in 2019," CDP states on their website. "Representing a combined global population of 170 million, they are leading the transition to a climate-safe future and setting an example for others to follow."