Add an Event
Newswire
Calendar
Features
Home
Donate
From the Open-Publishing Calendar
From the Open-Publishing Newswire
Indybay Feature
Publish to Newswire
Add an Event
Related Categories: Central Valley | Environment & Forest Defense | Government & Elections
Rally at State of the State calls on Newsom to phase out oil production
by Dan Bacher
Saturday Feb 22nd, 2020 2:43 PM
“Today’s State of the State address is an opportunity to make clear that the Newsom Administration will not wrap itself around fossil fuel polluting billionaires — representing an industry that profits from human suffering and ecological destruction,” said Matt Nelson, Executive Director of the nation’s largest online Latinx organizing group, Presente.org. Photo of rally at State Capitol on February 19 by Dan Bacher. 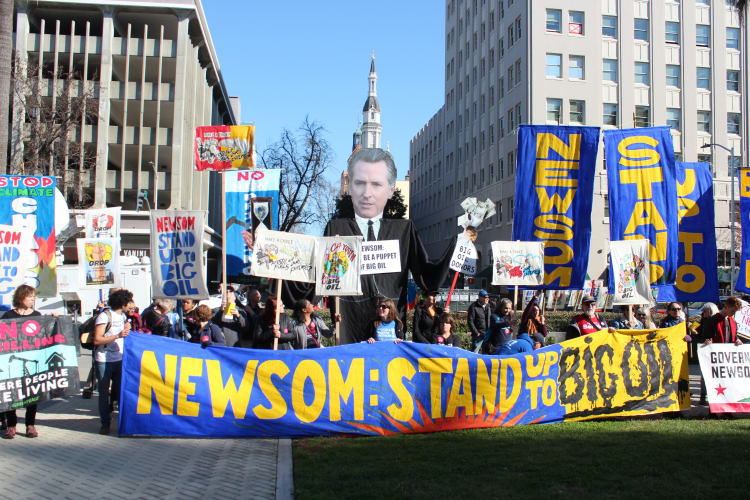 original image (5184x3456)
On the morning of February 19, activists from groups affiliated with the Last Chance Alliance held a spirited rally on the sidewalk outside the west steps of the Capitol just before Governor Newsom delivered his State of the State address.

Over 100 climate justice advocates, youth, and members of frontline communities suffering the worst impacts of California's fossil fuel industry called on Governor Newsom to phase out oil production by ending the permitting of new projects and instituting a 2,500-foot health and safety buffer between oil wells and homes, schools, and parks.

They remained on the sidewalk outside the Capitol with colorful art and signs, chanting their demands until the start of the speech at 10:30 a.m. The rally was preceded by a projection of images on the west side of the Capitol the night before.

Alexandra Nagy, California Director of Food & Water Action, and other members of her organization came from the Bay Area to join the rally.

“California’s future is bleak unless Governor Newsom takes action to stop the expansion of the fossil fuel industry in California. In the face of catastrophic climate change, we ask him to consider the future he leaves to his own children and urge the Governor to stop issuing new oil and gas permits immediately,” said Nagy. “We ask Governor Newsom to give all families a fighting chance in the face of climate change by committing to the phase out of oil and gas drilling and a fair and just transition off fossil fuels for workers and communities. This is what real climate leadership demands.”

Many young people from the Youth Vs. the Apocalypse came to chant and hold signs and banners.

Aprah, a six grader from Oakland, said, “I’m here because the Governor is poisoning our ground. It’s our future that is at stake and we have to live with California’s investing in fossil fuel. I’ve had asthma since I was 5 years old. I want California to stop putting toxic stuff into the air.”

In a similar vein, Sara Goody, a fifteen-year-old from San Francisco, said, “This is my future at stake and Gavin Newsom needs to listen to us, not Big Oil. He’s listening to the oil executives — we want him to listen to the people asking him to stop fossil fuel production in California.”

Adelita Serena from Woodland, an organizer from Mothers Out Front, said, “We are here today asking the governor to listen to us as we share our three demands. We are putting pressure on him to be the climate leader that he has to be for the state and the nation. California is seen nationally as one of the most progressive states, yet it is still a major oil producer. I’m so happy that there are so many diverse people from young to old here today.”

Serena said her group and the Last Chance Coalition are calling on Newsom to take three major actions:

2. DROP existing production: Set a national and global precedent by becoming the first oil- producing state to announce a phase-out of existing production in line with the Paris climate goals, with a just and equitable transition that protects workers, communities, and economies.

3. ROLL out setback limits: Begin by first phasing out oil production in places that are suffering most from the impacts of fossil fuel extraction—by creating a 2500-foot health and safety buffer zone between fossil-fuel infrastructure and homes, schools, and other sensitive sites.

“Today’s State of the State address is an opportunity to make clear that the Newsom Administration will not wrap itself around fossil fuel polluting billionaires — representing an industry that profits from human suffering and ecological destruction,” said Matt Nelson, Executive Director of the nation’s largest online Latinx organizing group, Presente.org.

“Our members appreciate Governor Newsom’s stated intentions to work as a leader to address the dearth and presence of California’s climate crisis, and the harm caused by fossil fuel extraction. We urge the governor to refuse to be the Novocain that seeks to numb the public while the state continues to drill,” he stated.

On the day before the rally, Consumer Watchdog and the FracTracker Alliance revealed that the total number of oil and gas well permits issued in 2019 under the Newsom Administration rivals the number issued during the last year in office of former Governor Jerry Brown.

Also on the day before the rally, California’s Department of Conservation kicked off a series of public hearings in Kern County, the heart of the state’s oil industry, as the agency attempts to update public health and safety protections for communities near oil and gas production operations.

As California officials tout their “climate credentials,” drilling for oil and natural gas has expanded in recent years. Governor Jerry Brown’s regulators approved over 21,000 new oil and gas drilling permits during his administration.

“It’s obvious that we can’t fight the climate crisis and expand fossil fuel use at the same time,” concluded Caroline Henderson, Senior Climate Campaigner at Greenpeace USA.While Governor Newsom has taken some compelling first steps towards a greener future, he must do more to phase out fossil fuel production in California, while at the same time, protecting public health and building a just and equitable transition for workers and communities. We are watching Governor Newsom -- he needs to live up to his responsibilities as California’s leader.”

Governor Newsom focused on the homeless crisis in his State of the State address — and didn’t mention a word about oil production or climate change.

However, Catherine Reheis-Boyd-Boyd, President of the Western States Petroleum Association and former Chair of the Marine Life Protection Act (MLPA) Initiative Blue Ribbon Task Force to create so-called “marine protected areas” in Southern California, used the SOTS as an opportunity to promote the “vital” role that the oil industry plays in California’s economy. In a statement responding to Newsom’s address, Reheis-Boyd-Boyd said:

“Governor Gavin Newsom’s State of the State address pointed to the common ground we share on issues of social equity and the economy. In these areas and others, we are optimistic that through innovation and earnestly working together we will find solutions for our people, our planet and our prosperity.

The oil and gas industry remains vital to our state’s economy, residents and way of life. We deliver essential, affordable energy supplies to millions of hard-working people and provide hundreds of thousands of good middle-class careers in the communities we serve.”

It is no surprise that the 4,545 or reworked well permits approved by the California Department of Conservation in 2019 were issued in a year where oil industry organizations again dominated lobbying spending in California.

When you add the $8.8 million from WSPA and the $5.9 million from Chevron, that comes to a total of $14.7 million spent of lobbying between the two oil industry giants alone.

"The Last Chance Alliance was launched last year demanding that Governor Newsom halt the development of all new dirty fuel projects in California, create a plan to phase out all fossil fuel extraction as quickly as possible, and provide support and opportunities for those most impacted by the transition,” according to the group. “The Alliance is comprised of more than 700 environmental, health, justice, faith, labor, community, parent, and consumer organizations, including California’s youth and celebrities, who have joined them in their call on Governor Newsom.”
Add Your Comments
Support Independent Media
We are 100% volunteer and depend on your participation to sustain our efforts!