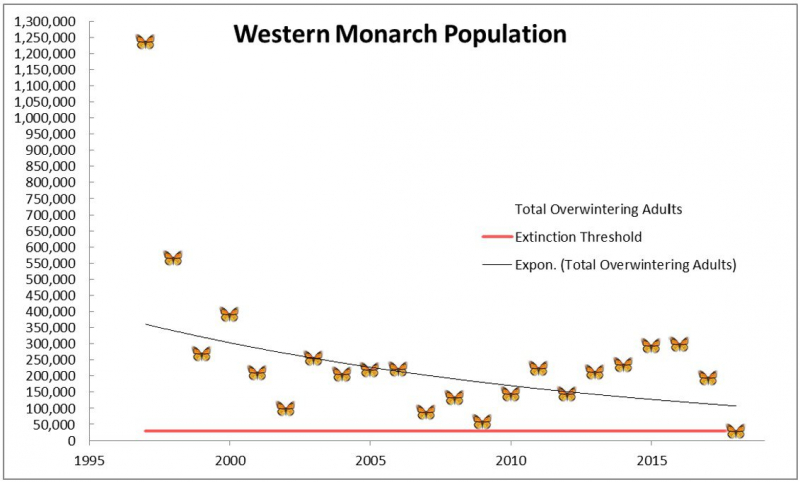 original image (1131x682)
WASHINGTON, February 20, 2020 — A new bill in Congress would provide $25 million a year to save the rapidly declining western population of monarch butterflies from extinction. This monarch population is found primarily in Arizona, California, Idaho, Nevada, Oregon, Utah and Washington.

The measure would create the Western Monarch Butterfly Rescue Fund, which will provide $12.5 million a year to support on-the-ground conservation projects to stabilize and save the western population of monarch butterflies. The bill would also provide an additional $12.5 million per year to implement the existing Western Monarch Butterfly Conservation Plan.

“This bill offers a glimmer of hope for the iconic orange-and-black butterflies Americans love so dearly,” said Stephanie Kurose, endangered species policy specialist at the Center for Biological Diversity. “Western monarchs are on the brink of collapse, and these beautiful creatures need all the help they can get to survive the extinction crisis.”

Western monarch butterflies migrate from states west of the Rocky Mountains to overwinter on the California coast. Over the past 30 years, the western monarch population has declined by nearly 99.4% because of prolonged drought, loss of milkweed and pollinator habitat, pesticides and logging of the trees where they cluster for the winter.

In 2018 the population reached a historic low of fewer than 29,000 butterflies, falling below the predicted extinction threshold. The population failed to rebound in 2019, maintaining just 29,000 individual butterflies.

Extinction — previously predicted within two decades — is now likely in the next few years if urgent action isn’t taken.

“We’re thankful for the leadership of Sen. Merkley and Reps. Panetta and Carbajal in offering monarchs a much-needed lifeline,” said Kurose. “The time to act is now. It would be a tragedy if future generations were robbed of the opportunity to witness this remarkable butterfly flitting about in their gardens.”