Add an Event
Newswire
Calendar
Features
Home
Donate
From the Open-Publishing Calendar
From the Open-Publishing Newswire
Indybay Feature
Publish to Newswire
Add an Event
Related Categories: Central Valley | Environment & Forest Defense | Government & Elections
Governor Newsom, AG Becerra say they will sue over Trump water plan
by Dan Bacher
Thursday Feb 20th, 2020 7:03 AM
Recreational and commercial salmon fishermen responded positively to Newsom’s announcement of a lawsuit against the Trump administration, but John McManus, President of the Golden State Salmon Association (GSSA), cautioned that “a measure of Governor Newsom’s sincerity will be if he orders his Department of Water Resources to pull their Trump-like water pumping plan back and rework so it’s protective of the environment." 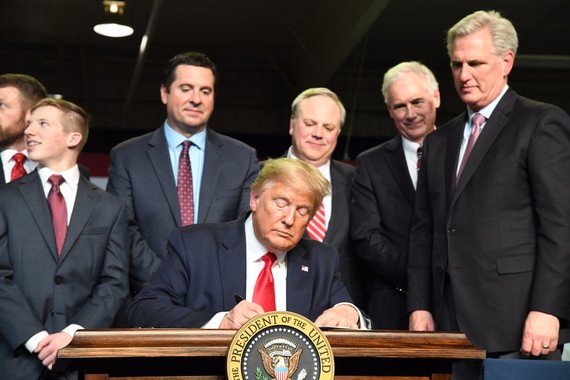 Newsom said his goal is to continue the path of “enforceable voluntary agreements” for solving water supply and ecosystem problems.

“We will file legal action in the coming days to challenge the federal biological opinions to protect highly imperiled fish species close to extinction,” said Newsom in a statement. “Our goal continues to be to realize enforceable voluntary agreements that provide the best immediate protection for Delta species, reliable and safe drinking water, and dependable water sources for our farmers for economic prosperity. This is the best path forward to sustain our communities, our environment and our economy.”

California Attorney General Xavier Becerra today also vowed to sue over the Trump Administration’s announcement of the final record of decision (ROD) and adoption of biological opinions “endangering protected species and their habitat in the Sacramento and San Joaquin River watersheds, including the Bay Delta.”

After Trump made his speech in Bakersfield, U.S. Secretary of the Interior David Bernhardt, former Westlands Water District and oil industry lobbyist, joined Trump and other federal officials in Bakersfield, California for the signing of a Presidential Memorandum supporting what they described as “more water development and delivery in California.”

“President Trump told us to make water in the west more reliable, and the Bureau of Reclamation is doing just that,” said Brenda Burman, Commissioner of the U.S. Bureau of Reclamation. “Working with partners in California, and using the best available science, we will implement new biological opinions to modernize Central Valley Project operations.”

Federico Barajas at the San Luis & Delta-Mendota Water Authority, one of the key agencies pushing for the revised biological opinions, said the authority “is pleased” with the signing of the Record of Decision on the Long-Term Operations of the Central Valley Project (CVP) and State Water Project (SWP).

“This action implements a long overdue update to the operating rules for the Federal and State Water Projects that provide water to California’s farmland and farming communities, its municipal and industrial regions, and important wildlife refuges south of the Delta,” said Barajas.

On the other hand, fishing, tribal and environmental groups thanked Governor Newsom for the announcement that he will sue the Trump administration over new federal biological opinion.

"The federal government has a tribal trust responsibility to protect salmon, but instead of honoring Tribes, Trump is draining the rivers we rely on," said Morning Star Gali, a Pit River Tribal member and Save California Salmon's Tribal Water Coordinator. "Tribes have senior water rights, and salmon are central to our cultures, health, and way of life. We will fight back."

Barbara Barrigan-Parrilla, Executive Director of Restore the Delta, also was encouraged by the announcement.

“Thank you, Governor Newsom, for keeping your word to sue the Trump Administration to protect the San Francisco Bay-Delta estuary. We know we have pushed you hard, but we love the estuary, and its people, and will fight hard because it is worth saving,” Barrigan-Parrilla-Parrilla stated.

Recreational and commercial salmon fishermen also responded positively to Newsom’s announcement of a lawsuit against the Trump administration, but John McManus, President of the Golden State Salmon Association, cautioned “a measure of Governor Newsom’s sincerity will be if he orders his Department of Water Resources to pull their Trump-like water pumping plan back and rework so it’s protective of the environment.”

“Californians are heartened to hear that the Newsom administration will take action to stop Donald Trump’s attempted rerouting of water from northern California salmon rivers to his supporters in the dry western San Joaquin Valley,” said McManus. “We hope the governor allows Attorney General Xavier Becerra to do his job of protecting California’s environment, which Becerra has proven very good at.”

“In Trump’s water remarks today in Bakersfield, many Californians noticed that the president never said a word about the tens of thousands of salmon industry jobs, including many in rural areas that his new water diversion plan would destroy,” McManus added.

Newsom’s “voluntary water agreements” are opposed by many fishermen, Tribal leaders, conservationists and environmental justice advocates because similar past agreements have resulted in fish collapses, rather than fish restoration. Last September, Patrick Porgans of Planetary Solutionaries called Newsom’s voluntary agreements the “Munich Agreement on California Water” in his piece on the Daily Kos website:  http://www.dailykos.com/...

In his article, he exposes the “disastrous track record” of voluntary agreements. He points out that the voluntary agreements all have one thing in common: “they find that restrictions on Delta export pumping to protect fish are not needed.” Porgans writes:

“We’ve been here before – Voluntary Settlement Agreements in California water are not new. They have a disastrous track record. The 1994 Bay-Delta Accord, signed 25 years ago, espoused the same hoopla that collaboration and habitat restoration and voluntary efforts to increase flows in the Delta would restore fisheries and increase reliability of water supplies.”

Over $8.4 billion in taxpayer borrowed money ($13.5 billion with interest) was spent under the CalFed program, while fish populations in the Delta crashed. Adaptive management under CalFed also failed. Joe Grindstaff, former director of CalFed acknowledged: ‘Fundamentally, the system we devised didn’t work’ Felicia Marcus, former chair, State Water Resources Control Board stated in 2018 that ‘Some native fish species have been pushed to the edge of extinction in an ecosystem on the verge of collapse.’

Recommendations by independent and agency biologists to increase flows to restore fish populations have been blocked for decades by the water export contractors’ opposition, effectively delaying the Water Board actions. On the eve of the Water Board’s finally taking long needed regulatory actions, the Voluntary Settlement Agreements were championed by the Brown administration and supported by the Newsom administration.

Instead of being based on the Water Board’s independent 2017 Scientific and Technical Basis report, the Voluntary Settlement Agreements are based on studies paid for by the water export contractors. Such studies are not new. The water contractors have been producing them for decades. The studies all have one thing in common: they find that restrictions on Delta export pumping to protect fish are not needed. The studies are also contrary to decades of scientific consensus by fish agency and independent biologists that water exports are a major contributing factor to the decline of pelagic and anadromous fish populations in the Delta.”

In addition to promoting the voluntary agreements, Newsom is going full speed ahead with his controversial single Delta Tunnel plan. Tunnel critics say the construction of the tunnel would hasten the extinction of Delta and long fin smelt, Sacramento River winter and spring-run Chinook salmon, Central Valley steelhead, green sturgeon and other fish species, as well as imperil steelhead and salmon runs on the Trinity and Klamath rivers.

Photo credit: U.S. Department of Interior.
Add Your Comments
Support Independent Media
We are 100% volunteer and depend on your participation to sustain our efforts!