Add an Event
Newswire
Calendar
Features
Home
Donate
From the Open-Publishing Calendar
From the Open-Publishing Newswire
Indybay Feature
Publish to Newswire
Add an Event
Related Categories: Central Valley | Environment & Forest Defense | Government & Elections
Trump will visit San Joaquin Valley to sign salmon-killing water plan
by Dan Bacher
Monday Feb 17th, 2020 9:54 PM
“While Trump is in California talking about plans to destroy our rivers and salmon runs, Gavin Newsom’s Resource Secretary Wade Crowfoot will be in Sacramento discussing water issues and cutting ‘green tape," said Regina Chichizola, co-director of Save California Salmon. “Gavin Newsom has only not come through on his promise to fight Trump on water, he is actively negotiating with him, and has started prioritizing new dams and diversions above restoration.” 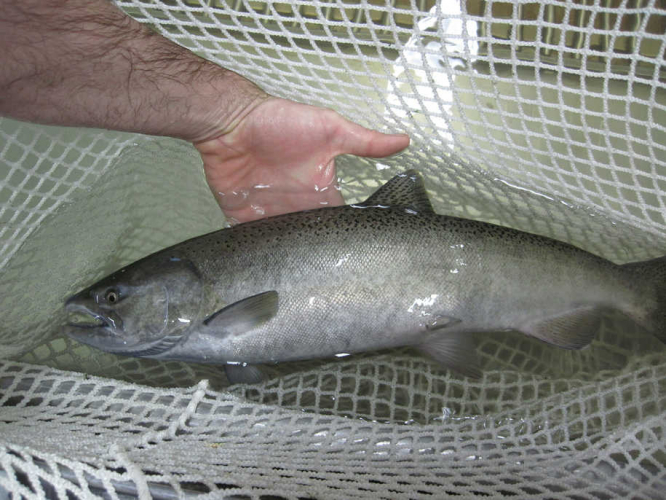 original image (915x686)
Stockton, CA – In the latest volley in the California Water Wars, President Donald Trump will travel to Bakersfield in the southern San Joaquin Valley on Wednesday, February 19, to sign a Record of Decision (ROD) on his controversial federal Biological Opinion that maximizes water deliveries from the pumps that divert water from the San Francisco Bay-Delta.

Big growers in the Valley support the ROD because it will allow the pumping of more water for the irrigation of crops, while fishing and conservation groups say that Trump’s alliance with powerful corporate agribusiness interests like the Westlands Water District will result in less water for fish and the ecosystem, driving endangered Delta smelt and salmon species closer to extinction.

The details of Trump’s visit to the Valley have not been disclosed yet, although a statement from the White House released to media said Trump’s Bakersfield visit would focus on efforts to “dramatically improve the supply and delivery of water in California and other Western states.” Trump’s Public Schedule page on the White House website did not mention Trump’s visit to the valley, although it did list a fundraiser at Larry Ellison’s home in Rancho Mirage, CA, on Wednesday afternoon.

Trump fired the first group of scientists from the National Marine Fisheries Service last year when they returned with a science draft report that said fish need more water to survive, according to a statement from Restore the Delta. For more information, read: Trump team weakens endangered species protections for California salmon and delta smelt – Los Angeles Times 10/22/2019

At the same time, California Governor Gavin Newsom has apparently backed down on his pledge to file a lawsuit against the politically motivated biological opinions by the Trump administration.

“We don’t understand why Governor Newsom has still not filed the promised lawsuit against Trump’s tainted BiOps,” said Barbara Barrigan-Parrilla, Executive Director of Restore the Delta. “Why is his administration collaborating with the Trump Administration on creating ‘faux science’ about the needs of Delta fisheries and ignoring the millions of Delta residents dependent on a healthy estuary? Fishery numbers are at their lowest levels ever and Bay-Delta cities are experiencing harmful algal blooms due to lack of flows.”

“The people of California have made it clear they want the SF Bay-Delta estuary protected. What does Governor Newsom gain from siding with Secretary Bernhardt, Westlands Water District, and the State Water Contractors either politically, policy wise, or in terms of protecting California’s water supply in a changing climate? We think nothing,” she stated.

“Californians will remember which side Governor Newsom will choose – especially if it’s the side of special interests tied to a corrupt Federal administration over our state’s people and public trust resources,” said Barrigan-Parrilla.

In a similar vein, John McManus, President of the Golden State Salmon Association (GSSA), said that Trump and his Interior Secretary are in California this week to push “another shady deal.”

“This one seizes more northern California water, which will decimate the environment and the state’s valuable salmon runs, to give to his supporters in the desert-like western San Joaquin valley,” said McManus.

“Trump’s Interior Secretary Bernhardt worked for the huge corporate ag operators in the dry western San Joaquin Valley for years, fighting to bring them more water when the law prohibited it.  Having lost every court battle when he was their attorney, he’s now attempting to change the rules to allow huge increases in water diversions and pumping highly detrimental to the environment and jobs.  The Golden State Salmon Association and allies have gone to court to stop this water grab and to protect the jobs of tens of thousands of Californian’s in the salmon industry,” McManus stated.

“The state previously concluded that the increased water diversions under Trump fail to protect salmon and the environment. Governor Gavin Newsom said he’d stand up to Trump’s assault on California and go to court to stop it but other voices have apparently gotten to him, and so far, Newsom has failed to act,” continued McManus.

McManus urged the Governor to immediately authorize Attorney General Becerra to file litigation to protect the state, as he said AG Becerra successfully did when Trump administration tried to “choke the upper Sacramento River and destroy parts of the McCloud River by raising Shasta Dam.”

“California needs Newsom to stand up to Trump and protect jobs, California’s waters, and the coastal and rural communities that rely on salmon,” McManus concluded.

After the Bakersfield event, Trump will head to Southern California on February 19 for the fundraiser hosted by billionaire and Oracle co-founder and executive chairman Larry Ellison at his resort/home in Rancho Mirage. Contributors will pay $250,000 for a golf outing, round-table discussion, and a photo with Donald Trump.

“Over two days in Southern California, the president will receive an update on the 2028 Summer Olympics from officials in Los Angeles, meet with farmers in the Central Valley about water access, and hold campaign fundraisers in Beverly Hills and at the Rancho Mirage home of billionaire Oracle co-founder Larry Ellison,” the Washington Times reported.

On the day before Trump signs the ROD, California Natural Resources Secretary Wade Crowfoot will speak in Sacramento on “Cutting Green Tape.” The event will be from 12:30 p.m. to 1:30 p.m. on February 18 at the Natural Resource Building Auditorium, 1416 Ninth Street, Sacramento.

“While Trump is in California talking about plans to destroy our rivers and salmon runs, Gavin Newsom’s Resource Secretary Wade Crowfoot will be in Sacramento discussing water issues and cutting ‘green tape," said Regina Chichizola, co-director of Save California Salmon. “Gavin Newsom has only not come through on his promise to fight Trump on water, he is actively negotiating with him, and has started prioritizing new dams and diversions above restoration.”

Gavin Newsom received a total of $755,198 in donations from agribusiness in 2018, based on the latest data from http://www.followthemoney.org. That figure includes $579,998 in the agriculture donations category, combined with another $116,800 from Beverly Hills agribusiness tycoons Stewart and Lynda Resnick, owners of the Wonderful Company and the largest orchard fruit growers in the world, and $58,400 from E.J. Gallo.

Some Delta and fish advocates believe that by vetoing SB 1, supporting the voluntary water agreements, backing the Delta Tunnel, hiring grower William Lyons as a special "agriculture liaison" to the Governor's Office, overseeing the issuing of a new draft EIR that increases water exports for the state and federal projects rather than reducing them and releasing a controversial water portfolio that includes fast tracking the Sites Reservoir, Newsom could be bending to the will of his agribusiness donors.

The Delta smelt, once the most abundant species on the Sacramento-San Joaquin River Delta, continues its long slide towards extinction. For the second year in a row, the California Department of Fish and Wildlife in its annual fall midwater trawl survey in 2019 found zero Delta smelt during the months of September, October, November and December.

Conservationists, Tribal leaders and fishermen say the biological opinion that Trump will sign on Wednesday threatens Delta smelt, salmon and other fish species even more than they already are by maximizing Delta water exports to agribusiness interests in the San Joaquin Valley. For more information, read: http://www.dailykos.com/…

Photo credit: Winter-run Chinook salmon, courtesy of U.S. Fish and Wildlife Service.
Add Your Comments
Support Independent Media
We are 100% volunteer and depend on your participation to sustain our efforts!