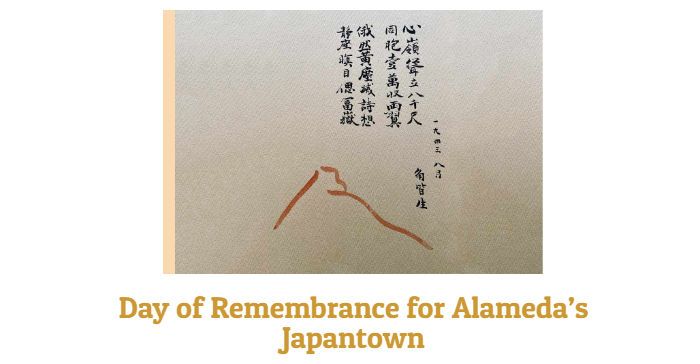 The annual Day of Remembrance, February 19, 1942, commemorates the signing of Executive Order 9066, by President Franklin D. Roosevelt, which led to the forced removal and incarceration of 120,000 Americans of Japanese ancestry living on the West Coast, who had to abandon their jobs, their homes, and lives, to be sent to one of ten internment camps scattered in desolate, remote regions of the country.

No Japanese Americans were ever charged, much less convicted, of espionage or sabotage against the United States. Yet they were targeted, rounded up, and imprisoned for years, simply for having the “face of the enemy.”

Executive Order 9066 is responsible for the disappearance of a once thriving Alameda Japantown. The words and stories of the Japanese in Alameda remind us of an extreme act of racial targeting that took place only 78 years ago.

‘The writing is on the wall’ is an indication of imminent danger. K Gallery’s exhibit includes: Japanese calligraphy and carbon copies of typewritten letters from WWII internment camps, artist Najib Joe Hakim’s photographs of Palestinian and Lebanese walls and Salma Arastu’s paintings that are inspired by the scripture of the Quran.

Maze Daiko and Kallan Nishimoto perform: Heart of the Mountain with Poems

Excerpts from the documentary Honoring Alameda’s Japanese Americans introduced by Reverend Michael Yoshii of Buena Vista United Methodist Church, Alameda.
END_OF_DOCUMENT_TOKEN_TO_BE_REPLACED
Added to the calendar on Mon, Feb 17, 2020 1:15PM
Add Your Comments
Support Independent Media
We are 100% volunteer and depend on your participation to sustain our efforts!