Harriet Tubman as a Woman Warrior 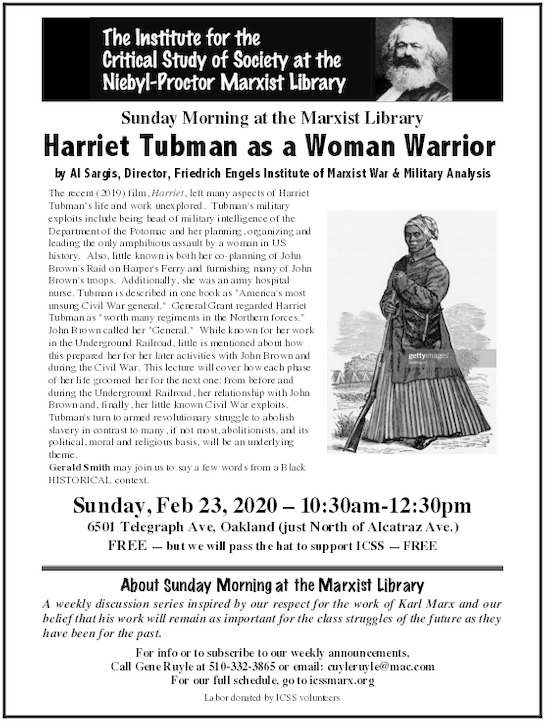 The recent (2019) film, Harriet, left many aspects of Harriet Tubman’s life and work unexplored.  Tubman's military exploits include being head of military intelligence of the Department of the Potomac and her planning, organizing and leading the only amphibious assault by a woman in US history.  Also, little known is both her co-planning of John Brown's Raid on Harper's Ferry and furnishing some of John Brown's troops.  Additionally, she was an army hospital nurse.  This perspective on Tubman is described in one book as "America's most unsung Civil War general."  It is why General Grant regarded Harriet Tubman as "worth many regiments in the Northern forces" and John Brown called her "General".  While known for her work in the Underground Railroad, little is mentioned about how this prepared her for her later activities with John Brown and during the Civil War. This lecture will cover how each phase of her life groomed her for the next one: from before and during the Underground Railroad, her relationship with John Brown and, finally, her little known Civil War exploits. Tubman's turn to armed revolutionary struggle to abolish slavery in contrast to many, if not most, abolitionists, and its political, moral and religious basis, will be an underlying theme.
Gerald Smith may join us to say a few words from a Black HISTORICAL context.

Labor donated by ICSS volunteers
END_OF_DOCUMENT_TOKEN_TO_BE_REPLACED
Added to the calendar on Mon, Feb 17, 2020 10:21AM
Add Your Comments
Support Independent Media
We are 100% volunteer and depend on your participation to sustain our efforts!