by Stop the Santa Cruz Recalls
Campaign finance reporting forms recently filed with the City of Santa Cruz demonstrate how “Santa Cruz Together” coordinated with “Santa Cruz United” to place measures on the March 2020 ballot seeking the recall of two Santa Cruz City Council members, Drew Glover and Chris Krohn. Together, the two groups spent over $100,000 in 2019. Basically, they bought their way onto the ballot. 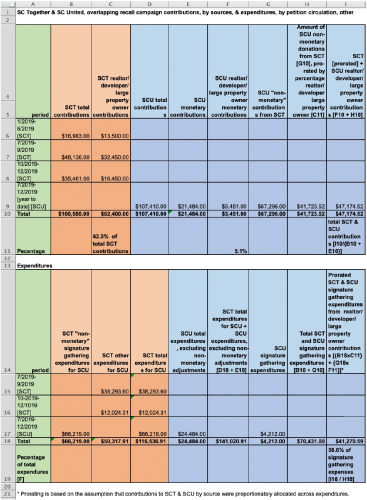 original image (995x1353)
Santa Cruz Together was initially formed to defeat Measure M, a rent control initiative, in the 2018 election, but in the same election, with the addition of Justin Cummings and Drew Glover, the City Council gained a progressive majority. Subsequently, in 2019, Santa Cruz Together – dominated by contributions from real estate, large property owner, and developer interests – largely underwrote payments per signature on petitions circulated for a recall campaign spearheaded by Santa Cruz United.

The finances amount to a real shell game and there is more to be uncovered, but it is now clear how the basic scheme worked. An initial analysis of campaign finance forms (see table below) yields the following facts:

Total expenditures to put the recall on the ballot are not yet fully evident. It is not clear, for example, where the expenditures for several expensive citywide mailers were reported by Santa Cruz Together, which sent them out on behalf of Santa Cruz United. Nevertheless, conclusions can be drawn.

The fundamental and repeated misrepresentation put forward by Santa Cruz United spokespersons is that this was a grassroots campaign. No doubt a number of people made small donations and some Santa Cruz townspeople were involved in volunteer signature gathering. But campaign reporting forms show that the major funding supporting the signature gathering campaign to qualify the recall for the ballot came from Santa Cruz Together.

By any previous standard, $70,000+ is an unprecedented amount paid in Santa Cruz for signature gathering. Santa Cruz United spokespersons repeatedly claimed that volunteers gathered 90% of signatures. This claim is false on the face of it. If it were true, paid signature gatherers obtained only 2,300 signatures of the 23,000 that Santa Cruz United claimed it submitted, receiving an astronomical (and completely implausible) $30.62 per paid signature. (Typical per-signature payments in California range from $3 to $8.)

This is a sad chapter in Santa Cruz politics. We hope and trust that Santa Cruz voters will vote No on the recalls, to stand up against big money buying their way into getting a recall election on the ballot.


For documentation from campaign finance reporting forms, go to:
https://www.dropbox.com/sh/m4r17cywnx9jr1c/AAB0CF7ntO02aUWlkpVWdBuKa/Current%20Forms

This Press Release from Stop the Santa Cruz Recalls was originally published on January 29, 2020 here:
https://stopsantacruzrecalls.org/2020-01-29-press-release/

END_OF_DOCUMENT_TOKEN_TO_BE_REPLACED
Add Your Comments
Latest Comments
Listed below are the latest comments about this post.
These comments are submitted anonymously by website visitors.
TITLE
AUTHOR
DATE
Singleton downtown forward and taj garage Library connection
Finnigan
"Grassroots" gives recallers an UNDESERVED pass!
Ed Porter
Support Independent Media
We are 100% volunteer and depend on your participation to sustain our efforts!