Add an Event
Newswire
Calendar
Features
Home
Donate
From the Open-Publishing Calendar
From the Open-Publishing Newswire
Indybay Feature
Publish to Newswire
Add an Event
Related Categories: East Bay | Labor & Workers
Scooter Red Alert: The Oakland Lime Strike Is Crashing the Company
by Spunky Peons
Friday Feb 14th, 2020 8:33 PM
On the evening of February 10th, the Lime scooter company cut pay for contractors by 30% without warning. Many if not most contractors immediately responded by refusing to charge the company's electric scooters. It's likely that there are more uncharged scooters in the streets now than charged scooters. It's getting so bad that countless scooters are beginning to crash, along with prospects for the company in Oakland. 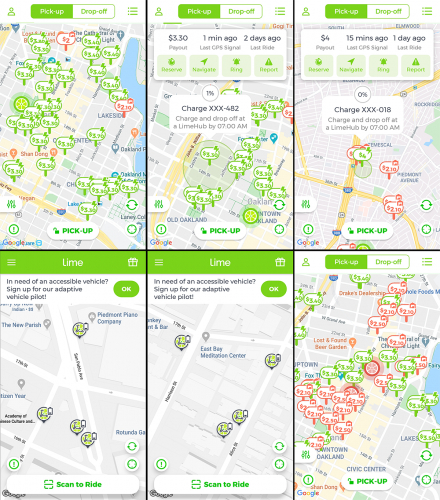 original image (1200x1363)
[Five screenshots from the Lime app captured on Thursday night, the sixth being from Friday afternoon. So many red scooter icons is not a good sign for the company.]


After four nights of the contractor strike, it's apparent that Lime had no "Plan B" before they enacted the drastic pay cut. Lime is so used to pushing around disempowered contractors that it casually flipped a switch on reduced pay in Oakland, thinking it could painlessly cruise past any blowback and start racking up that juicy 30% in contractor savings. But the situation is not necessarily getting any better for the company, or customers.

As the company provides both contractors and customers as little information as possible, it's hard to tell how many contractors are striking, how many fewer charged scooters are out there, or how customers are reacting to the mess. It was noted previously that the number of scooters available for charging in the contractor side of the Lime app might be thinning, which would indicate that at least some contractors — known as "juicers" — or overworked Lime warehouse employees were making a dent in the growing numbers of dying scooters. But, another explanation has revealed itself.

Responding to the fallout from the contractor strike, Lime management has resorted to sending whoever might still be juicing, including presumably warehouse employees, to retrieve only dead unrideable scooters, of which there are countless now four days into the strike. Low battery ones simply remain in the streets for riders who are sure to be disappointed with the increasingly unreliable service from Lime.

This is going to get a little technical, and perhaps boring, but it's necessary background for understanding how the strike and the company's fecklessness are literally crashing the company in Oakland.

In top left screenshot here, you can see that for yet another night there were still lots of scooters available for pickup by contractors in downtown Oakland well after 9pm, the time when the company traditionally releases the bulk of scooters for charging in the Lime app. Pre-strike, there would never be so many needing charging late in the evening. It likely would be no more than a dozen or so, if any at all.

Ever since Lime came to town, the company released scooters for charging that held up to a 40% charge. Those were relatively quick to recharge and return to Lime's designated dropoff locations, known as hubs. A few months ago, however, in an apparent cost-saving move, Lime began to only release scooters with a charge of 25% or less, the savings coming from not paying anyone to charge scooters that were still nominally viable for customers to ride.

Sometimes scooters made available to contractors held a charge of 15% charge or lower, if a rider had ridden it until it ran out of gas, so to speak. At less than 15%, scooters won't get anyone further than a couple of blocks. At under 10%, scooters aren't likely to get you 50 feet before they flat-out die. It's simply not enough juice to propel forward a scooter carrying the weight of an adult rider.

Those percentages for contractor pickups were stable prior to the start of the strike Monday night. This meant that every morning every scooter on the streets of Oakland was either fully charged or held an adequate charge for a decent ride. But that's no longer the case, as clues in the Lime app reveal that management has gone into into crisis mode behind the scenes.

Looking closer at individual scooters represented by green icons on the map last night, the remaining charge percentage for almost every scooter is at unusually low levels, most of which are under 10% (one percent and even zero percent examples shown in the two top screenshots on the right). The batteries are so low because the scooters have been sitting out for days.

This lack of recharging has apparently created downward pressure on scooters available for customers. In the two screenshots from the rider side of the Lime app shown on the bottom left, many scooters made available for riders have very low batteries. The customer side of the app doesn't display charge percentages as does the contractor side, it translates the charge to distances that the scooters can potentially travel with the current charge level.

The ones in bottom left screenshots are identified by the app as having a mile of riding distance left in them, but that's doubtful given the effects of the pay cut and strike this week. It's more likely that a mile is the minimal distance the Lime app can display and the actual charge is less than that.

So, frustrated riders are now not only walking past numerous dead scooters they find on the sidewalks to get to the relatively few shown as available in the app, but the scooters that are "available" won't necessarily get them very far.

And the situation gets worse. Once a scooter drops below a 5% charge, heading toward zero, which can only happen after a scooter sits out for days, the computer circuitry crashes. The scooters throw an error message on their LCD screens and even recharging won't fix the issue. These scooters have to be returned to the Oakland warehouse on Mandela Parkway rather than be charged and "served" at a hub.

The final screenshot on the lower right shows an unusually huge proportion of red scooter icons, indicating those that contractors and/or employees need to return to the warehouse for servicing (rebooting?). Most likely, given the dwindling charges shown in the app last night, these red scooters have crashed.

It's doubtful that such a large number of scooters have suddenly broken down, been vandalized to the point of becoming unrideable, or are otherwise in need of regular service. It's riders who generally report broken scooters via the Lime app, so that's a lot of riders reporting a lot of problematic scooters. Certainly, customers would prefer to be finding scooters to ride rather than scooters to report.

Take note of the pay rate displayed for red/broken scooters. It's currently $2.10. The rate is lower because contractors don't have to charge them, just drop them off outside the Lime warehouse. The rate for broken scooters had been $3 per scooter until a couple of months ago, but, presaging the current pay cut and strike, Lime cut the rate 30%.

Before the broken scooter rate was cut, contractors regularly rolled through the streets collecting higher value scooters for charging first, and then scooped up broken ones when the operational scooters were gone. After the rate decreased, contractors largely ignored the red icons in the app, leaving Lime warehouse employees to pick up broken scooters in their large white cargo vans.

If most contractors are refusing to pick up the green icon charging scooters in protest of Monday's 30% rate cut, it's improbable that any are going to jump at the chance to deal with the increasing number of broken ones at an even lower rate, scooters that they had already largely abandoned as not being worth their time.

This is where things stand as the week closes, heading into the weekend. Lime chose to burn contractors, contractors responded by striking, and the company's fleet of scooters is crashing in the streets. If Lime wants to preserve its business in Oakland before customers completely give up on them, the company needs to return the rate for juicing scooters to the previous spectrum of $5+ per scooter. Or the company can admit that its business has no prospects for viability without venture capital funding or screwing workers, close up shop and be done with it. 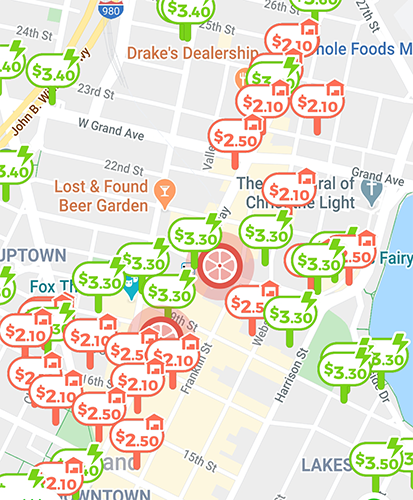 https://www.indybay.org/newsitems/2020/02/...
Add Your Comments
Support Independent Media
We are 100% volunteer and depend on your participation to sustain our efforts!