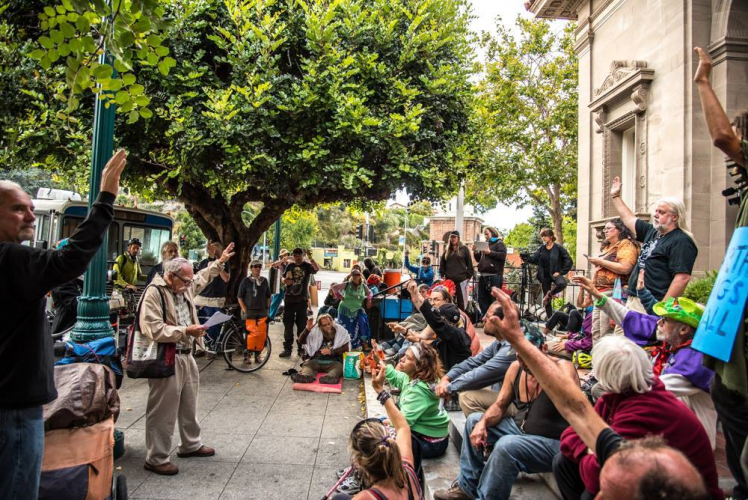 • Whether or not the proposal reflected a practical approach to the issue in question;

• Whether or not the proposal served a recognized public policy; and

• Whether or not the proposal could effect a positive change in our community.

Our findings are as follows:

We understand the intent of a ban on multi-day camping, and view it as an improvement on the past bans which entirely criminalized sleeping. However, making homeless people strike their tents and pack up their belongings every morning at 7am may arguably be viewed as simply harassment in disguise. Additionally, there are concerns about the current provisions providing for removal and storage of homeless property. In light of the lack of a realistic and practical process for property storage and recovery, we do not think any revised ordinance can or should be implemented unless and until day use facilities and adequate storage are available to people without homes.

Possession of Syringes within Parks and Beaches

In the abstract, we support a ban on the possession of syringes without a prescription at parks or beaches due to the dangers presented by the unsafe litter of syringes in these spaces. However, it appears that under state law, this ordinance could not be enacted until Jan 1, 2021 at the earliest. Currently, California law permits possession of up to 10 syringes for personal use. Health &Safety Code Section 11364 (c) applies if syringes are acquired from an authorized source, such as a pharmacy or syringe exchange program. Also, under state law, syringe users can possess syringes in a safe container.

We do not agree with the Stay Away ordinances currently in force at the City’s Parks, which amount to a way that police can restrict the movement of human beings without the right to appear in front of a judge. Such a restriction is all the more onerous given the fact that Santa Cruz has two (2) parks where dogs can run and sleep but human beings are denied the latter.
Moreover, we certainly do not agree with the idea of expanding these rules to the downtown area. Our most important business district must remain open to all citizens and particularly those without shelter when places for shelter are not available. Laws already exist against a variety of nuisance behaviors and can be enforced appropriately.

We do not exactly understand how this proposal would be enforced, but we support it in concept.

People enjoy natural places in different ways and at different lengths of time. We do not think that the City should get into the business of deciding whether to prioritize shorter or longer visitations to this natural environment.

1. Presuming the person about to be cited DECIDES whether they elect to accept the offer of services or the infraction, we think this could be a useful tool to encourage people to make use of services. While we support this concept, we do not think it could practically be of much use unless and until services are greatly expanded so as to be predictably and actually available.

2. Again, presuming the person with a fine due to an infraction DECIDES to do community work instead of paying an infraction, we support the proposal. If the person does not have the choice on whether or not to elect to do the service, this would amount to indentured servitude and violate both the constitution and common ethics.

3. We do not agree with the idea that police would be placed in a position of having increased enforcement authority based on subjective assessments of an individual’s demeanor and/or state of mind. We are concerned about elevating recalcitrance to a criminal offense. We think that laws involving resisting arrest are already sufficiently broad.

We have mixed feelings about how this proposal would affect our community. We do note, however, that removing shopping carts is already illegal under state law.

Micah Posner
Steve Pleich
Philip Posner
Add Your Comments
LATEST COMMENTS ABOUT THIS ARTICLE
Listed below are the latest comments about this post.
These comments are submitted anonymously by website visitors.