Newswire
Calendar
Features
Home
Donate
From the Open-Publishing Calendar
From the Open-Publishing Newswire
Indybay Feature
Publish to Newswire
Add an Event
Related Categories: California
Tribal Members and Youth Ask for North State Hearings and River Protection` at Sacramento
by Save California Salmon
Monday Feb 3rd, 2020 9:36 PM
Sacramento, California Today Northern California Tribal members, supporters, and members of the Hoopa High School water protector club traveled to Sacramento to ask the state of California to protect the Trinity and Sacramento Rivers, and to schedule meetings in Northern California on the Governor’s proposed Delta Conveyance Project. The group said the fact that the Delta Tunnel hearings are only occurring in the Southern part of the state and started even before the comment period ended on the water portfolio demonstrates that the governor needs to take more public feedback before moving forward on large, environmentally damaging water projects. 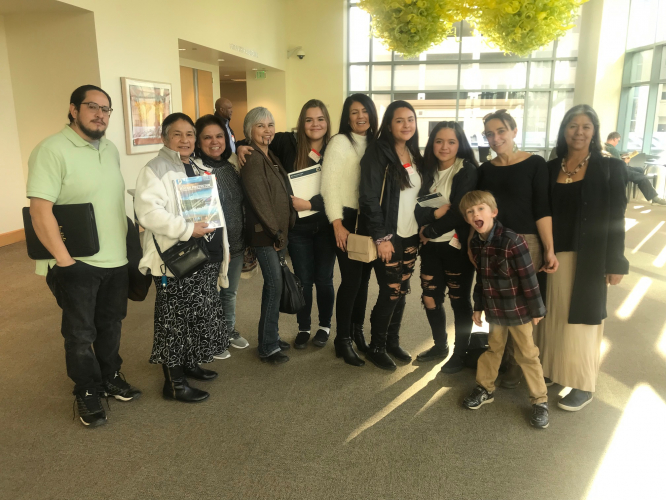 original image (2016x1512)
“The Governor’s water portfolio, Sites Reservoir plan, and Delta Tunnel proposal all threaten the Trinity, Klamath and Sacramento rivers, however the state is not having any public hearings in the North State,” stated Regina Chichizola from Save California Salmon. “It feels like the Governor wants the North State’s water, but not our opinions.”

Chichizola explained that early January, California’s Governor Gavin Newsom released his highly anticipated Water Resilience Portfolio. She said that although the portfolio discusses prioritizing restoration and water savings, it also prioritizes the three most controversial and environmentally impactful threats to California’s rivers- the Delta Tunnel project, The Sites reservoir project; and voluntary agreements in lieu of new state instream flow criteria. She said that all of these proposals endanger the North State and North Coast’s water quality and fisheries, and thus the economy, health, and food security of Northern California’s people.

Chief Caleen Sisk from the Winnemem Wintu Tribe also voiced concerns that the tunnel project is connected to the controversial Shasta Dam raise. She said that the building of the Shasta Dam did not benefit her people in any way however it did flood 26 miles of their land. “The dam made us jobless and homeless, now they are talking about raising the Shasta dam for the second time, that has to be connected to these tunnels, because they are not talking about shutting down the current fish killing diversions. They are only talking about taking more water”

The Governor’s portfolio even suggests accelerating environmental permitting and approval for new diversions and the Sites Reservoir, despite the fact that fisheries in the areas targeted, such as the Sacramento and Trinity River, are facing extinction and agencies have warned of potentially devastating fisheries impacts from the new diversions. Recently several counties, tribes and even the State Advisory Group on Salmon and Steelhead have asked for more environmental review and safeguards for the Sites Reservoir project due to reports that show the project will have negative impacts on the Trinity River, and concerns it will harm the Klamath and Sacramento Rivers. The state has already shelled out $817 million for the Sites Reservoir Project. No public meetings about the Sites Reservoir have occured north of Sacramento. Comments on the water portfolio are due on February 7.

Danielle Ray Frank from the Hoopa High School water protector club said that she came down to get the information she needed to educate more people back home in Hoopa about the threats to the Trinity River, and to ask for public hearings about the tunnel in Northern California. “We came to ask for more meetings so more people from our Tribe, and more people that are directly affected, can go to a meetings and voice their concerns.” Frank commented that the Trinity River means everything to the Hoopa Valley people, but they have to continually fight for the river because so much water is diverted.

Frank said that she will provide information on the hearing Hoopa High School Water Protectors Club’s Water Hearing meeting. The hearing is at the Hoopa High School on Saturday, February 8th at 2pm. Students will serve dinner and discuss the Delta Tunnel Project and other threats to the Trinity River.

More information on the Water Portfolio and Delta Tunnel, including information on how to comment and request North State meetings are available at californiasalmon.org or at https://www.change.org/p/california-governor-save-our-salmon-no-new-massive-diversions-and-reservoirs-in-northern-california

http://californiasalmon.org
Add Your Comments
LATEST COMMENTS ABOUT THIS ARTICLE
Listed below are the latest comments about this post.
These comments are submitted anonymously by website visitors.