Add an Event
Newswire
Calendar
Features
Home
Donate
From the Open-Publishing Calendar
From the Open-Publishing Newswire
Indybay Feature
Publish to Newswire
Add an Event
Related Categories: California | Central Valley | U.S. | Racial Justice
20th Anniversary of Rosa Parks Day in California
by Khubaka, Michael Harris
Wednesday Jan 29th, 2020 3:56 PM
Our 2020 Rosa Parks Day of Courage, at Sacramento City Hall is the oldest known official celebration of Rosa Parks Day in California. ACR 156, California Legislation recognizing the 20th Anniversary of Rosa Parks Day will recommit a statewide effort to share the strength, courage, faith and determination of Rosa Louise McCauley Parks with young school children and seasoned seniors who have forgotten how to sing, "We Shall Overcome" in California and throughout the world. 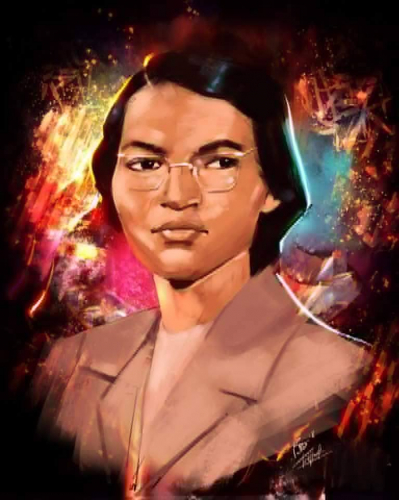 original image (767x960)
Rosa Parks, the civil rights icon made famous for her refusal to give up her seat to a white man on a city bus in Montgomery, Alabama, in December 1955, is often mischaracterized as a quiet seamstress, with little attention paid to her full life story.

A new Library of Congress exhibition, “Rosa Parks: In Her Own Words,” will reveal the real Rosa Parks was a seasoned activist with a militant spirit forged over decades of challenging inequality and injustice.

This first exhibition of the Rosa Parks Collection, which includes her personal writings, reflections, photographs, records and memorabilia. The collection was placed on loan with the Library in 2014 and became a permanent gift in 2016 through the generosity of the Howard G. Buffett Foundation.

“Rosa Parks: In Her Own Words” will immerse visitors in Parks’ words, reflections, handwritten notes and photographs from throughout her life, allowing her to tell her own life story. Four sections of the exhibition will explore Parks’ early life and activism, the Montgomery bus boycott, the fallout from Parks’ arrest for her family and their move to Detroit, and the global impact of her life.

“Rosa Parks lived a life dedicated to equal rights and social justice, and she helped change the country with the example she set,” said Librarian of Congress Carla Hayden. “Our new exhibition is an important milestone for Rosa Parks to tell her story for new generations through her own words and pictures now preserved at the Library of Congress.”

Born and reared in Alabama during the Jim Crow era of legally mandated segregation, Rosa Louise McCauley was taught by her grandfather “never to accept mistreatment.” She married Raymond Parks, a charter member of the NAACP branch in Montgomery, Alabama, in 1932, and together they were early activists for racial equality. They would organize to free the Scottsboro Boys in the 1930s. In 1943, Rosa Parks became the secretary of the Montgomery NAACP, and the branch focused on voter registration and cases of racial violence and discrimination.

After the bus incident, she was punished with death threats, unemployment and poverty – but remained committed to the struggle for social justice.

Throughout her life, Parks would advocate for civil rights, workers’ rights, women’s rights, prisoners’ rights and black youth, and she spoke out against apartheid and other injustices around the world.

Highlights from the exhibition include:

The Parks’ family Bible – being exhibited for the first time;
Photographs and letters documenting Parks’ family and early years; Parks’ account of “keeping vigil” with her grandfather to protect their home from Klansmen; A manuscript in which Parks recalls a childhood encounter with a white boy who threatened to hit her and how she responded; Parks’ personal reflections on her arrest for refusing to surrender her seat on a bus to a white passenger on Dec. 1, 1955, recounting the emotional toll of incarceration; Letters and documentation of the Montgomery bus boycott and its consequences for those who joined the protest; Political buttons, brochures, photographs and letters documenting the civil rights movement from the Parks papers and the vast NAACP Records at the Library; A handmade blue dress from Parks’ wardrobe, on loan from the Smithsonian’s National Museum of African American History and Culture;
Correspondence to Rep. John Conyers of Michigan when Parks worked on his congressional staff from 1965 to 1988; The Spingarn Medal citation, the NAACP’s highest honor, awarded to Parks in 1979; The Presidential Medal of Freedom awarded to Parks at the White House in 1996; The Congressional Gold Medal awarded to Parks in 1999.

A new book, “Rosa Parks: In Her Own Words,” is a companion to the exhibition and reveals the civil rights icon through her private manuscripts and handwritten notes. The book, published by the University of Georgia Press in association with the Library of Congress, includes more than 80 color and black-and-white images from Parks’ collection – many appearing in print for the first time

“Rosa Parks: In Her Own Words” is made possible by support from the Ford Foundation and Catherine B. Reynolds Foundation, with additional support from AARP, HISTORY®, Joyce and Thomas Moorehead and The Capital Group.

The Rosa Parks Collection is a gift of the Howard G. Buffett Foundation. The Library of Congress also is grateful to the Rosa and Raymond Parks Institute for Self Development, which worked closely with Rosa Parks to preserve her archive and legacy.

The Library of Congress is the world’s largest library, offering access to the creative record of the United States – and extensive materials from around the world – both on-site and online. It is the main research arm of the U.S. Congress and the home of the U.S. Copyright Office. Explore collections, reference services and other programs and plan a visit at loc.gov, access the official site for U.S. federal legislative information at congress.gov and register creative works of authorship at copyright.gov.