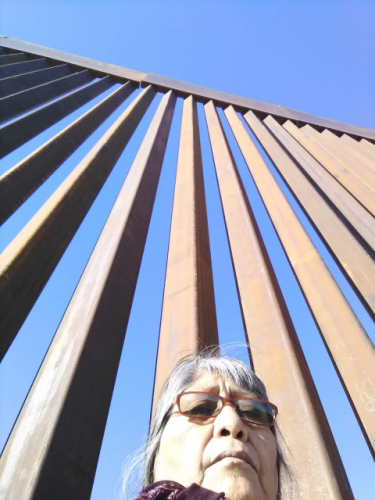 Human remains, dating between 300 and 1500, Classic Hohokam who are O'odham ancestors, were found in this area in the spring and fall of 2019. The U.S. government and the contractors knew they were violating state and federal laws by digging up graves in an area known as a sacred and ceremonial place of O'odham, and kept this secret until January of 2020.

On the U.S. side, the land is known as Organ Pipe National Monument.

The destruction affects O'odham who live on their land in communities on both sides of the so-called border in Arizona and Sonora, Mexico.

Rivas said, "The wall is piecemeal, a systematic government policy. I wonder if this is an opportunity to generate controversy to distract the focus on other things going on behind the public eye."

Read the full article with photos at Censored News:
https://bsnorrell.blogspot.com/2020/01/border-wall-united-states-government.html

Copyright Brenda Norrell and Ofelia Rivas, Censored News
may not be used without permission
brendanorrell [at] gmail.com