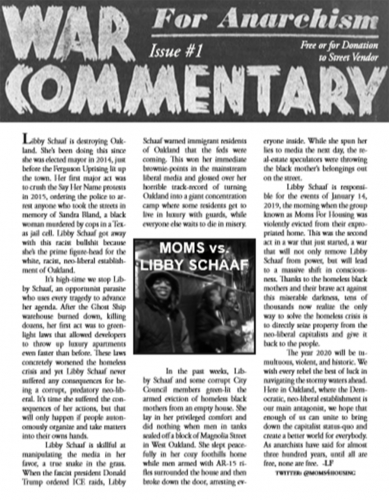 original image (900x1155)
We're pleased to release the first issue of War Commentary, an anarchist news-sheet dedicated to chronicling the war between the forces of greed and the forces of liberation, specifically in the city of Oakland. We've already distributed several hundred copies across the city and have made it easily reproducible for those who have access to a printer, either at work or home. We hope to provide an outlet for people to say what they want to say about the state of Oakland, anonymously or not, without going through any established channels.

If you are interested in contributing, please send ideas or finished articles (300-500 words in length) to WarCommentary [at] protonmail.com

Libby Schaaf is destroying Oakland. She’s been doing this since she was elected mayor in 2014, just before the Ferguson Uprising lit up the town. Her first major act was to crush the Say Her Name protests in 2015, ordering the police to arrest anyone who took the streets in memory of Sandra Bland, a black woman murdered by cops in a Texas jail cell. Libby Schaaf got away with this racist bullshit because she’s the prime figure-head for the white, racist, neo-liberal establishment of Oakland.

It’s high-time we stop Libby Schaaf, an opportunist parasite who uses every tragedy to advance her agenda. After the Ghost Ship warehouse burned down, killing dozens, her first act was to greenlight laws that allowed developers to throw up luxury apartments even faster than before. These laws concretely worsened the homeless crisis and yet Libby Schaaf never suffered any consequences for being a corrupt, predatory neo-liberal. It’s time she suffered the consequences of her actions, but that will only happen if people autonomously organize and take matters into their owns hands.

Libby Schaaf is skillful at manipulating the media in her favor, a true snake in the grass. When the fascist president Donald Trump ordered ICE raids, Libby Schaaf warned immigrant residents of Oakland that the feds were coming. This won her immediate brownie-points in the mainstream liberal media and glossed over her horrible track-record of turning Oakland into a giant concentration camp where some residents get to live in luxury with guards, while everyone else waits to die in misery.

In the past weeks, Libby Schaaf and some corrupt City Council members green-lit the armed eviction of homeless black mothers from an empty house. She lay in her privileged comfort and did nothing when men in tanks sealed off a block of Magnolia Street in West Oakland. She slept peacefully in her cozy foothills home while men armed with AR-15 rifles surrounded the house and then broke down the door, arresting everyone inside. While she spun her lies to media the next day, the real-estate speculators were throwing the black mother’s belongings out on the street.

Libby Schaaf is responsible for the events of January 14, 2019, the morning when the group known as Moms For Housing was violently evicted from their expropriated home. This was the second act in a war that just started, a war that will not only remove Libby Schaaf from power, but will lead to a massive shift in consciousness. Thanks to the homeless black mothers and their brave act against this miserable darkness, tens of thousands now realize the only way to solve the homeless crisis is to directly seize property from the neo-liberal capitalists and give it back to the people.

The year 2020 will be tumultuous, violent, and historic. We wish every rebel the best of luck in navigating the stormy waters ahead. Here in Oakland, where the Democratic, neo-liberal establishment is our main antagonist, we hope that enough of us can unite to bring down the capitalist status-quo and create a better world for everybody. As anarchists have said for almost three hundred years, until all are free, none are free. -LF

In their latest ploy to simultaneously look like good liberals and reinforce the notion that unhoused people are human trash, Libby Schaaf has collaborated with governor Gavin Newsom to bring FEMA trailers to East Oakland to be used as temporary ‘housing.’ If the numbers put forward by the mainstream media are correct, they intend to cram up to ten people into each FEMA trailer. Just like the Tuff Shed program, this action reveals yet again how the political elite of California view the houseless population: as an unsightly inconvenience to be dealt with in the most expedient and inexpensive manner possible.

As one of the wealthiest places on the planet, the Bay Area has no excuse for its failure to provide for the basic needs of all. An often-cited statistic, confirmed easily by a quick internet search, tells us that there are at least four vacant housing units (entire units, not just rooms) for each person sleeping on the streets. In a sane society, unused resources would be made available to those in need. Re-allocating unused resources hoarded by those too wealthy to care about other humans is within the realm of power given to politicians: if Newsom and Schaaf actually cared about the people sleeping on the streets, they could at least attempt to make the abundance of empty units available as very low/no income housing. If nothing else, pushing for this obvious solution would reinforce the human dignity of the unhoused, affirming their right to real housing, as well as expose the rich for the selfish bottom-feeding scum that they are.

Considering that neither of these supposedly leftist politicians have ever worked to house people in existing empty homes, then why are Schaaf and Newsom even bothering with FEMA trailers and Tuff Sheds?

As automation continues to drive wages down and increase unemployment, the problem of what to do with an increasingly unnecessary population looms in the mind of every politician. The relatively high standard of living enjoyed by many in the United States up until recently presents a challenge, as most expect to live at least as well as their parents. The exception, of course, is the people who mess up-- who use drugs, have a kid, drop out of school, or talk back to their abusive boss and lose a job. These people aren’t expected to live well at all. We have been taught to blame those excluded by society for their problems, to pretend for example that drug use is the cause of misery rather than an attempt to momentarily escape the pain of reality. Never mind who runs the drugs at great profit into our communities.

Once the expectation of a decent life has been canceled, rounding people up and forcing them into cancer-causing sheds under a freeway overpass can be proclaimed as an act of kindness. People are literally forced out of their self-organized tent encampments into highly policed and controlled City-run “Community Cabins.” By doing so, Schaaf and her allies are proclaiming that substandard, unsafe, overcrowded shelter in places where housing isn’t allowed to be built due to environmental hazards is sufficient for Oakland’s unhoused.

Left unchecked, we can expect the Oakland model of reducing the houseless to sub-human status and warehousing them in dangerous conditions under the guise of liberalism to spread. Yet their house of cards tumbles when asked the simple question: why do the police protect the empty buildings and vacation houses of the rich while our friends and family sleep on the streets? -MO 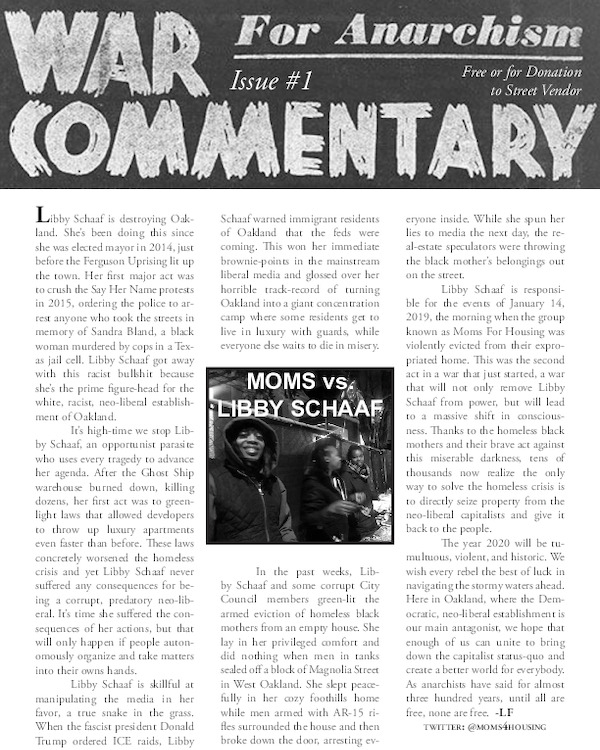 Download PDF (2.1MB)
Add Your Comments
Support Independent Media
We are 100% volunteer and depend on your participation to sustain our efforts!