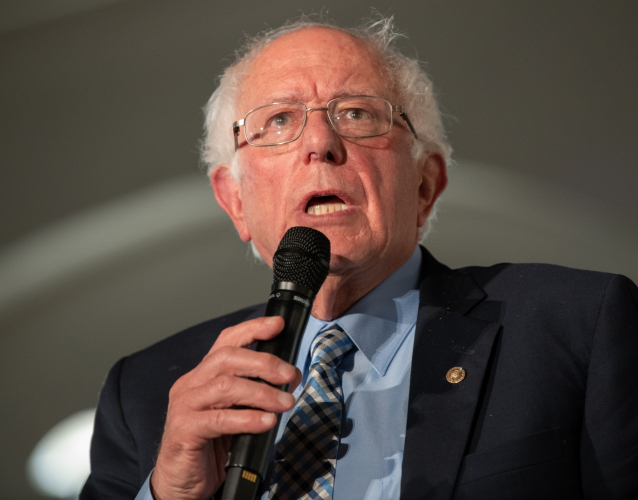 Beyond "sentimental and anemic"

To corporate media, Bernie Sanders is incorrigible. He won’t stop defying the standard assumptions about what’s possible in national politics. His 2020 campaign -- with feet on the ground and eyes on visionary horizons -- is a danger to corporate capitalism’s “natural” order that enables wealth to dominate the political process.

When the New York Times published its dual endorsement of Amy Klobuchar and Elizabeth Warren on Sunday night, the newspaper patted Sanders on the head before disparaging him. “He boasts that compromise is anathema to him,” the editorial complained. “Only his prescriptions can be the right ones, even though most are overly rigid, untested and divisive.”

Such complaints have been common for centuries, hurled at all the great movements for human rights -- and their leaders. The basic concept of abolishing slavery was “rigid, untested and divisive.” When one of the leading abolitionists, William Lloyd Garrison, was cautioned to cool it because he seemed on fire, Garrison replied: “I have need to be all on fire, for there are mountains of ice around me to melt.”

Bernie Sanders has ample reasons to be all on fire, and so do the social movements that are propelling his campaign for president. They refuse to accept the go-slow advice from the liberal establishment about fighting against systemic cruelties and disasters -- healthcare injustice, vast economic inequality, mass incarceration, institutional racism, the climate emergency, perpetual war and so much more.

The Bernie 2020 campaign is a crucible of broader activism from the grassroots that can spark uprisings of heat and light. To the extent that passivity and fatalism melt away, possibilities for gaining power become more tangible.

Martin Luther King Jr. readily acknowledged that “power without love is reckless and abusive” -- but he emphasized that “love without power is sentimental and anemic.” So, where does that leave us in relation to seeking power?

“Power, properly understood, is the ability to achieve purpose,” Dr. King wrote . “It is the strength required to bring about social, political or economic changes. In this sense power is not only desirable but necessary in order to implement the demands of love and justice.”

That’s what the Bernie 2020 campaign is about -- the necessity of gaining power “in order to implement the demands of love and justice.” And that helps to explain why the campaign is so profoundly compelling at the grassroots. It is oriented to meshing electoral work with social movements -- however difficult that might be at times -- to generate political power from the ground up. And that’s where genuine progressive change really comes from.

“The parties and candidates are not the agents of change,” a former chair of the California Democratic Party’s Progressive Caucus, Karen Bernal, said a few days ago at a pro-Sanders forum in San Rafael. “It’s the other way around. They respond to the outside forces of movements.”

Bernal was elected as co-chair of California’s Sanders delegation to the 2016 Democratic National Convention, and she is strongly supporting the Bernie 2020 campaign. While remaining intensely engaged with elections, Bernal keeps her eyes on the prize. “We don’t want to turn this into a cult of personalities,” she said. “It’s about the movement.”

Much of the energy behind the Sanders campaign is generated by what corporate media outlets often criticize or mock -- Bernie’s consistency as he keeps denouncing massive income inequality and corporate power. In the process, he confronts head-on the system that enables huge profiteering by such enterprises as the healthcare industry, fossil-fuel companies, private prisons and the military-industrial complex.

By remaining part of social movements, Bernie has made himself especially antithetical to the elite sensibilities of corporate media. Elites rarely appreciate any movement that is challenging their unjust power.

The electoral strength of the Bernie Sanders campaign is enmeshed with intensities of feeling and resolve for progressive change that pollsters and editorial writers are ill-equipped to measure or comprehend. The potential has sometimes been called “the power of the people.” Whatever you call it, such power is usually subjugated. But when it breaks free, there’s no telling what might happen.

Norman Solomon is cofounder and national coordinator of RootsAction.org. He was a Bernie Sanders delegate from California to the 2016 Democratic National Convention and is currently a coordinator of the relaunched independent Bernie Delegates Network. Solomon is the author of a dozen books including War Made Easy: How Presidents and Pundits Keep Spinning Us to Death.

https://www.normansolomon.com/
Add Your Comments
LATEST COMMENTS ABOUT THIS ARTICLE
Listed below are the latest comments about this post.
These comments are submitted anonymously by website visitors.