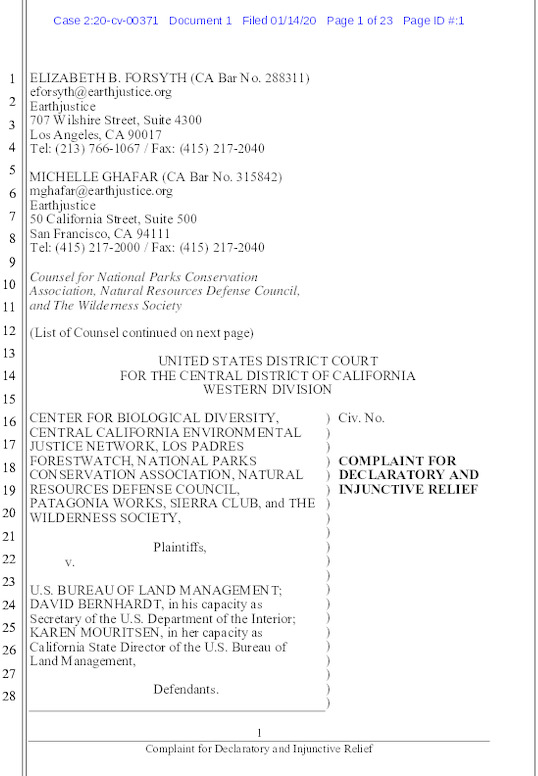 Download PDF (215.0KB)
Today’s lawsuit, filed in U.S. District Court in Los Angeles, says the Bureau of Land Management violated federal law by failing to consider fracking’s potential harm to public health and recreation in the region, as well as harm to the climate and possible groundwater and air pollution. The suit also notes the potential for oil-industry-induced earthquakes.

“Trump’s illegal, deeply unjust fracking plan would be a disaster for Central Valley communities, as well as our climate, wildlife and water,” said Clare Lakewood, a senior attorney at the Center for Biological Diversity. “We need to phase out fracking and oil drilling, not throw open our public lands to polluters. The future of our beautiful state and our children depends on it.”

The Trump administration also plans to allow fracking on an additional 725,500 acres across 11 counties in California’s Central Coast and Bay Area. In October conservation groups filed suit to challenge that decision.

“BLM’s ill-considered plan to fling wide the door to fracking on public lands is yet another assault on California’s efforts to protect its environment and move away from dirty fossil fuels,” said Ann Alexander, a senior attorney with the Natural Resources Defense Council. “Gov. Newsom just announced curbs on oil drilling, but BLM is charging full speed ahead with it. California is trying to find a way to rationally address its limited water supply, and now BLM is greenlighting activities that can contaminate it with toxic chemicals. This federal war on California really needs to stop.”

The BLM has not held an oil and gas lease sale in California since 2012, when a federal judge ruled that the agency had violated the National Environmental Policy Act by issuing oil leases in Monterey County without considering fracking’s environmental dangers.

“BLM continues to choose the oil industry over the health and safety of local communities in Central California,” said Michelle Ghafar, an attorney at Earthjustice. “A federal court already agreed with us once that the BLM failed to fully evaluate the impacts of the oil and gas expansion it is authorizing on public land. We’re returning to court once again to ensure the agency properly analyzes the impacts of devastating fracking activities in its plan.”

Most of the land the BLM plans to open to the oil industry is in the San Joaquin Valley, which already has some of the most severe air pollution in the country.

“The BLM’s illegal plan to open up 1 million acres of our public lands to oil extraction is a dangerous risk to our communities, company, homes and schools,” said Robert Tadlock, associate general counsel at Patagonia. “It would also accelerate the climate crisis, and Ventura County already ranks as the fastest-warming county in the continental U.S. We should be working harder and smarter to stop climate change, not ignoring impacts of further drilling.”

“California's Central Valley already suffers from some of the worst air and water quality in the state, and the decision allowing leases for oil extraction in public lands would be catastrophic for our region and especially for the health of our communities,” said Nayamin Martinez, director of the Central California Environmental Justice Network. “For years CCEJN staff has monitored emissions from oil and gas facilities and has documented that residents living near pumpjacks and storage tanks are constantly exposed to benzene and other VOCs that are carcinogenic. We need to protect our communities from further toxic pollution, not increase their exposure.”

“This reckless plan threatens the iconic landscapes that define central California, endangering our communities and moving us further away from a clean energy future,” said Jeff Kuyper, executive director of Los Padres ForestWatch. “Our action today seeks to uphold our nation’s environmental protection laws while securing a safe and healthy future for our region’s public lands.”

“Throughout this planning process, the Trump administration has ignored our warnings about the long-term impacts to nearby communities and national parks, in favor of short-term gains for oil and gas developers,” said Mark Rose, Sierra Nevada program manager for the National Parks Conservation Association. “This plan could allow drilling near several of our most cherished public lands, like Sequoia and Kings Canyon National Parks and Cesar E. Chavez National Monument, which already suffer from some of the worst air quality of any park units in the country.”

“The BLM is breaking the law by failing to adequately analyze the impacts that increased fracking would cause to air and water quality, public health and global climate change,” said Alex Daue, assistant director for energy and climate at The Wilderness Society. “Residents of California’s Central Valley and our public lands deserve thoughtful, science-backed planning. We are joining this lawsuit as part of our continued support for environmental justice and good stewardship of America’s shared public lands.”

Today’s lawsuit adds to a raft of recent legal challenges to the federal oil and gas leasing program over the damage to the climate. Climate scientists are urging drastic cuts to greenhouse gas pollution, but new oil and gas leases commit public lands to producing more pollution for decades. Federal fossil fuel production causes about one-quarter of all U.S. greenhouse gas emissions.

“At a time when we need to be taking urgent action to address the climate crisis, the Trump administration's attempts to expand fossil fuel extraction on our public lands represent a huge step in the wrong direction," said Gary Lasky, chair of the Sierra Club Tehipite Chapter in Fresno. “This reckless plan is a threat to our public lands, our health and our climate, and we will not allow it to go unchallenged.”

Fracking is an extreme oil-extraction process that blasts a mixture of toxic chemicals and water into the ground to crack open oil-bearing rocks. According to the BLM, about 90 percent of new oil and gas wells on public lands are fracked.

The Natural Resources Defense Council (NRDC) is an international nonprofit environmental organization with more than 3 million members and online activists. Since 1970, our lawyers, scientists, and other environmental specialists have worked to protect the world's natural resources, public health, and the environment. NRDC has offices in New York City, Washington, D.C., Los Angeles, San Francisco, Chicago, Bozeman, MT, and Beijing. Visit us at http://www.nrdc.org and follow us on Twitter @NRDC.​

Earthjustice, the nation’s premier nonprofit environmental law organization, wields the power of law and the strength of partnership to protect people’s health, to preserve magnificent places and wildlife, to advance clean energy, and to combat climate change.

For 100 years, the nonpartisan National Parks Conservation Association has been the leading voice in safeguarding our national parks. NPCA and its more than 1.3 million members and supporters work together to protect and preserve our nation’s most iconic and inspirational places for future generations. http://www.npca.org

Patagonia is in business to save our home planet. Founded by Yvon Chouinard in 1973, Patagonia is an outdoor apparel company based in Ventura, California. A certified B Corporation, the company is recognized internationally for its commitment to product quality and environmental activism—and its contributions of more than $110 million in grants and in-kind donations to date.


https://biologicaldiversity.org/w/news/press-releases/lawsuit-challenges-trump-plan-frack-drill-1-million-acres-california-public-lands-minerals-2020-01-14/
https://www.biologicaldiversity.org/
Add Your Comments
Support Independent Media
We are 100% volunteer and depend on your participation to sustain our efforts!